You are here: Home › Uncategorized › New Warhammer 40,000: The Ultima Founding

Another piece of new lore from the new edition today, as we look at the Ultima Founding.

In the wake of the Gathering Storm, the scattered Space Marine Chapters of the galaxy have been bled dry. Facing gigantic Warp storms that swallow whole systems, constant attack by the forces of Chaos, rampaging xenos and more, the Adeptus Astartes are stretched thinner than ever. Many Chapter Planets are now actively under siege, some Chapters are confirmed as destroyed* or lost, and even those faring relatively well have suffered high casualties and are in desperate need of reinforcement.

Enter Roboute Guilliman and his Primaris Space Marines. The newly reinstated Lord Commander of the Imperium has decreed that those Chapters most devastated by the ongoing wars should be amongst the first to be reinforced with this new breed of warrior. Starting with the Ultramarines, but also deploying these new Space Marines to every other Chapter in need, Guilliman aims to reinforce the Imperium’s scattered defenders across the galaxy.

It is not just as reinforcements to existing Chapters though. Guilliman has also ordered the creation of a host of new Chapters, the Ultima Founding, composed entirely of Primaris Space Marines. The warriors of these new Chapters were created entirely using the new processes discovered by Belisarius Cawl and established with all the necessary weapons, armour and equipment that they’ll need to conduct their defence of the Imperium.

These Chapter’s still trace their genetic lineage back to the gene-seed of the First Founding, and scions of all nine loyalists Legions emerged from the vaults beneath the red planet. They benefit from three additional organs and larger size, but it still remains to be seen if Cawl was able to successfully stabilise any of the known genetic deviations or impart any additional resistance to the effects of Chaos.

Many of these new Chapters have been assigned home worlds on the edge of the Great Rift, the Imperium’s new frontline in the war against Chaos, though some have inherited the empty Fortress Monasteries of Chapters that had been lost to the attrition of constant war. Many of these worlds face a continuous battle against the Daemons of the Warp, as well as an unpredictable mix of xenos raiders, pirates and invaders.

If you are looking for an excuse to embark on a Space Marine army come the new edition, this is it.

Here’s a page from the upcoming Warhammer 40,000 book, showing off not only how those new Primaris Space Marines look in the colours of some familiar Chapters, but also showing off few whole new ones: 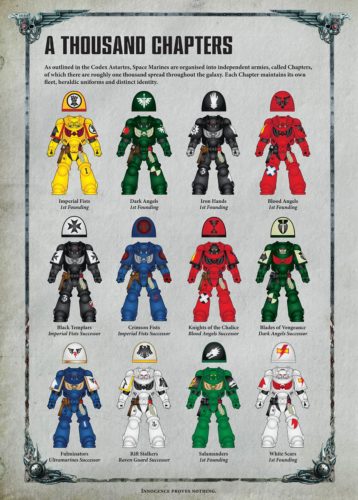 Many new Chapters have been created, so if you wanted to, this could be an opportunity to create one of your own! If the thought of creating your very own heraldry and backstory appeals, we’ve created this downloadable image of a blank suit of Mk X Tacticus Armour for you to try some colour schemes on. 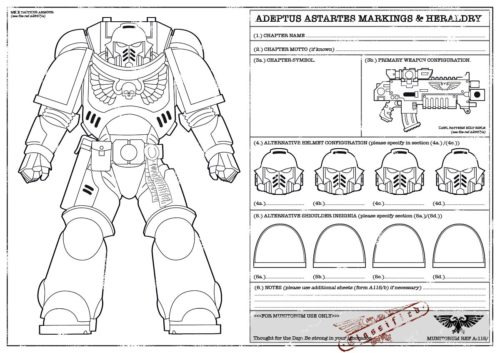 *Don’t worry – none of the big ones, though Magnus gave it a pretty good go at Fenris…

Posted on May 29, 2017 by Reecius in Uncategorized