Hey all, Danny from TFG Radio here to continue the pondering of Tyranids in the new world, and well, we have had the floodgates open lately, so let’s dig right into it, shall we? Of course, you can also read a whole bunch of other articles over at Frontline’s Tactic’s Corner. 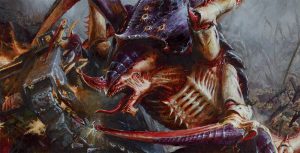 Tidbits from the second Q&A:

Monstrous creatures (specifically Tyranids named) are getting boosts to wounds, speed, and hitting power.  It was also mentioned that our saves would stay, so this is all good news. A 3+ save is much better in Newhammer and while we don’t know if we will get invulnerable saves much, at least our armor save can still be taken against a lot more weapons, even if just a 5 or 6+.

We also got a brief mention that Tyrant Guard (I think he called them Hive Guard) will act like Command Squads and be able to take wounds for our characters, and that sounds awesome, especially if we have characters that are under 10 wounds so we can bubble wrap them in cheap troops, and if they have sniper weapons, we have some Guards to take the heat.    Also, all the Sniper weapons so far are not that intimidating to a T5+ 3+ armor save model, so our Tyrants or even Primes might be pretty safe from all but the scariest of snipers (Vindicare, maybe).

Choosing Psychic powers is also real legit for us as well, as depending on the build, we definitely rely on key powers.  If we could choose to get Catalyst (which is ignoring wounds on a 5 or 6!) for defensive buffs or Warp Blast for anti-armor to complement our list builds, we can start to cover some weaknesses without hoping for a good roll.  This really opens up list building as Warriors with another defensive layer are much more playable. 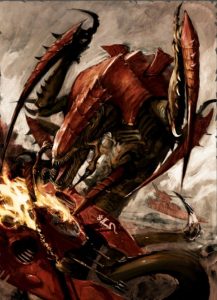 Yay the Trygon!  With deepstrike being replaced by individual mechanics and with no scatter, all of our juicy ways to show up in unexpected areas are much better, and while making a 9 inch charge is a bit rough math-wise, who knows what Troop choices we have that might be a bit faster.   The Trygon actually getting to deploy with a Troop unit suddenly makes them awesome, and with the now spoiled Synapse, the Trygon Prime could be worth the investment for some Synapse to go along with 30 devil-gants or even Genestealers.  Yum.

More than a few savvy players have already tested out that yes, you can fit 30 gants wholly within 3 inches of a Trygon, and you can even position models so that both the Trygon and its unit are within 9 of the same target.  Even if you wanted to go a mix of shooting and melee, a Trygon Prime (assuming it keeps its gun in some form) and a unit of Warriors with shooting could be a mean one-two punch of decent shooting followed by decent melee.  It also means that if you hold off the reserve for a bit, if your opponent is not too keen on their model placement, you can pop up and isolate a character to gun down pretty easily.   How awesome. 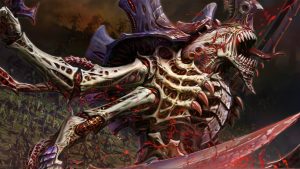 This is real good for us bugs.  We have never had allies like everyone else except for the newly returned Genestealer Cult, so it is pretty easy for us to run detachments with all the same faction keyword.  As I noted before, we are also damn good at filling out Force-Orgs as we have a lot of cheap choices in all of our slots, so Tyranids should be excellent at using Stratagems as hitting 8+ Command Points shouldn’t be too hard at all.   With that in mind, the three spoiled Stratagems are all biomass in the digestion pool for us:  A re-roll.  This never hurts, especially with either charge ranges (hello Trygon bomb) or even our few high powered ranged shots like the Rupture Cannon (I say it’ll be Heavy 2 S10 AP-3 D6 damage, but we’ll see).  Swinging First in Combat: Tyranids have struggled with this, but now, we can upset plans by having our big baddies get to swing even if charged or having a little bug screen suddenly swing once more before being ground out by a charging unit.  Autopass Morale: This is also awesome. While Synapse is definitely better, it is a nice clutch mechanic in case we lose a synapse creature.

I actually greatly appreciate that Tyranids seem well designed to utilize Stratagems as we aren’t just big dumb bugs (well, we are); The Hive Mind is an all-encompassing, all-learning machine, and in fluff, Tyranids constantly shift tactics as the battle demands, so long as the Synapse creatures are alive, so it is nice to see that maybe the Hive Mind is making a greater appearance. 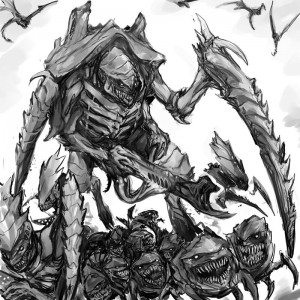 What excites me about this is the idea of <Hive Fleets>.  It would be super cool if Tyranids got a bit more customization in terms of having specific Hive Fleets generate specific Stratagems or abilities.  It would really help further the feeling of calling your Hive Fleet your own when you can tailor some of its abilities to match how you like to play.   This could be really cool although now I may need to repaint some bugs so I can have different Hive Fleets.  I had just finished painting them all too…

I think it is safe to say: YEEESSSS. There is a whole lot of good spoiled in there, and let’s look at the big takeaways:

Synapse ignores morale.  This is nothing but amazing for us.  We have a lot of little bugs, and well, they die quick because that’s their job, but now we don’t have to worry about them evaporating!  We can create huge walls of little bugs for relatively little points, and as long as Synapse is in range, they aren’t going anywhere.  In AoS, any Battleshock mitigation is huge, and in Newhammer, well, it is going to be equally as important.

This is by far the best thing we could have asked for, and being able to essentially ignore a critical phase in the game where models get removed from the table is absolutely crazy.  Assuming points stay more or less the same, even a unit of 20 Termagants is only 80 points, but that is a lot of models to chew through that do not suffer morale as long as Synapse is alive.

Lastly, I do appreciate that this captures the fluff of our hive fleets.  With this rule, your opponent has to try and isolate and eliminate Synapse creatures, which is exactly how the bugs should play on the table.  Just unloading into the little ones becomes almost futile, but I imagine we will crumble quickly if our Synapse is dead.

Genestealers are brought into line with GSC.  From the sound of it, the GSC genestealers were a prelude to our own, and all I ask is that the Hive Fleets keep our Genestealers as Troops.  Having an infantry choice with a 5+ invulnerable save is epic for us as we’ve never had it, and tack on Catalyst, and suddenly you have over 50% damage mitigation for our Genestealers.  That’s pretty great, especially considering that they move 8+D6 inches and can still charge.   They also pump out the attacks and can wreck armor with Rending becoming -4 AP on 6s to wound.  Add in the layered buff for having a Broodlord, and suddenly, a full unit of Genestealers (not including Broodlord since we don’t have its stats yet) is going to do about 11 wounds to any T8 or above target with a 3+ armor save (so almost half a knight).   That’s not too shabby at all, and so you can realistically cripple a heavy target or shred some infantry.

The Swarmlord is a legit threat.  Good old Swarmie. I love its fluff, and finally, the Swarmlord (points depending) is a solid choice for a mixed arms army.  The Command Ability to let a unit advance in the shooting phase has a lot of crazy combos, namely anything coming out of a Trygon hole for a pretty much guaranteed charge (please let Genestealers still be Troops) or even a full brood of Carnifexes to get in the scrum quick.  Double moves are great, and there is even some utility with our shooty units like say a Flyrant who can get close, abuse the new Twin-Linked rule, and then run like hell.  Let’s not forget that the Swarmie is already our best psyker, and with being able to pick our powers, you are going to have a commander that has all the tools.  It bears mentioning that Swarmie is also a beast in melee, and even in its weakest form, it is still on par with its current form in 7th edition.  With 7 attacks hitting on 2s at S8 and AP-3 with D6 wounds, a healthy Swarmie is able to do real damage.  Let’s not forget that it still gets a 4++ in melee AND a 5++ every other time.  Oh yes, Swarmie. Oh, yes.  The only downside is that it cannot hide as it is 12 wounds, so invest in some Tyrant Guard.

So yah, get hyped, Hive Fleets. Get Hyped.  If you haven’t, invest in some little gribblies, Hive Guard, or really, make sure you have a little bit of everything.  As always, go hit up TFG Radio as we continue our march to 100 episodes and our now confirmed new 40k extravaganza!

One Response to “Tyranids: Looking ahead (part 4)”