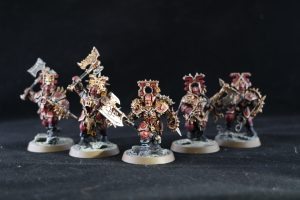 Hey everyone, Josh here to discuss the units that are available in the Blades of Khorne. This time we’ll be discussing one of my favorite units, Blood Warriors. For more tactics articles, check out the Tactics Corner!

Khorne claims the souls of mortals that he deems worthy and drenches them in a “Red Baptism”. From that point on they become Blood Warriors and live for murder lust and slaughter. Blood Warriors are the Bloodbound’s medium infantry unit. 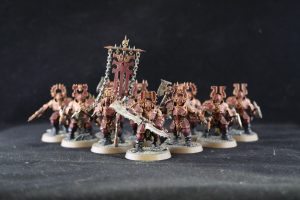 Blood Warriors are an excellent defensive unit that can deal serious damage when fighting specific types of units. They’re great for punishing your opponent while holding objectives, denying mobility and protecting your troops. In most cases, you should take them in units of ten or more to take advantage of the Goreglaive equipped to the Chaos Champion. You can run the entire unit with dual Goreaxes or a single Goreaxes and Gorefists. Unless you have some way to re-roll hits, run axes over gorefists. If you’re running Khorne allegiance then they’re likely make up a decent chunk of your battleline units.

No-Respite is the primary reason Blood Warriors are so good. This ability alone makes them incredibly useful for warding off any glass cannon style alpha strikes or medium to light infantry. With a set of Blood Warriors on the front line you’re opponent no-longer has the opportunity to attack painlessly.

Unlike most medium infantry, Blood Warriors have a 32mm base size. This make it easy for the majority of your models to pile in and make their attacks.
One in ten models can carry a Goreglaive. If you have enough models in the unit, make sure you equip it to the Chaos Champion so that you can make 3 attacks with it rather than 2. This thing does serious damage, and it’s accurate. I’ve seen this model alone lay monsters to waste.

Twin Gore Axes make these models very accurate, in the majority of cases they are inherently better than the Gorefists. Rerolling 1’s while hitting on a 3 is a sure fire way to make sure more wound rolls happen. If you can buff your Blood Warriors’ wound roll with the help of a Lord of Khorne on Juggernaut or Bloodstoker then these guys can tear battleline units to shreds. 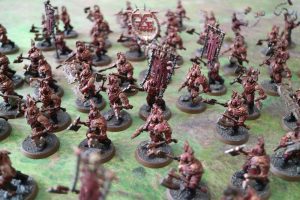 Models with a 4+ save and 2 wounds have some good resiliency. Depending on what you’re facing, count on your Blood Warriors to stick around for a few rounds of combat when they’re under attack. This is especially true if they’re in cover.

Aside from the Goreglaive, Blood Warriors have no rending weapons. Instead they have to compensate for their lack of rend with attack volume. This isn’t great for facing down high-save models with a re-rollable save ( Example: Saurus Guard + Starhost, Fulminators, Etc… ).

Gorefists only deal mortal wounds on an unmodifiable roll after a save and only if the unit attacking them is within 1” of a model in the unit. Because Blood Warriors are slow, Most of the time your opponent is going to be attacking your Blood Warriors. This means they’ll be choosing the best unit for the job. You probably aren’t going to be making many successful save rolls.

They have low bravery. This is largely irrelevant due to Bloodsecrator’s Rage of Khorne. However, it’s still something to keep in mind when they aren’t impacted by the Rage of Khorne.