The Primaris Marines have their Roots in the Fluff. Relax.

Hello denizens of the interwebs. SaltyJohn here from TFG Radio to bring you an article out of the ordinary for me. A fluff piece, discussing the roots for Primaris Marines in the Fluff!

If you’d like to listen along, or just listen, to this article it’s as easy as clicking “play” below.

In case you live under a rock, which is unlikely as you clearly have internet access, then you’ll know GW officially announced a new type of Space Marine, the Primaris Marine, on Monday May 15 2017. The wailing and gnashing of teeth was immediate in certain dark corners of the internet but generally the announcement was well received. The announcement video is below, after which I am going to address one of the more salt inducing parts of the announcement. Where in the fluff is this new type of Marine justified? The answer may surprise you. It’s justified in multiple places in the fluff.

The first rumors of these new Marines came from a teaser video around the time of the Rise of the Primarch release. With the official announcement from GW in several posts on the Warhammer 40,000 community page a fair number of players began to question the fluff viability of Guilliman and a Mechanicus Magos creating new Space Marines. First we should address the need for better marines. There are several instances in the Horus Heresy where it is hinted at that the Adeptus Astartes of the 41st millennium are a shadow of the Marines from the 31st millennium. In False Gods Horus is given a glimpse of the future by the Chaos Gods in which he sees Space Marines that are shadows of those he knows. This can be taken several ways but upon my initial reading I believed the passage to be hinting at the Space Marines being “diminished”. The case for this is made elsewhere and the degradation of Gene Seed is well documented throughout the fluff. Whether it is the degrading of the gene seed; removing the Belchers Gland from some Marines to the devastating effects of the Red Thirst on Blood Angels, the Gene Seed degrades over time. Over the course of 10,000 years it is completely understandable that the Space Marines of the 41st millennium may indeed be a shadow of those produced by the Emperor in the 31st. 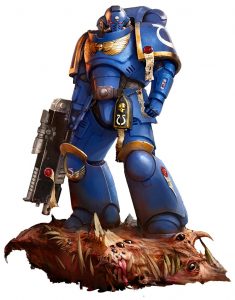 The fluff supports the need to “fix” gene seed in several places. Most notably the Blood Angels, and their successors, and the Space Wolves. The Space Wolves lack successor Chapters almost entirely due to the instability of their gene seed and the Canis Helix. The entire idea that “There are no Wolves on Fenris” comes from the idea that Space Wolf initiates that don’t hack it, or Space Wolves that succumb, turn into the wolves of Fenris. The Dark Angels seem obsessed with the cleanliness of their gene seed; the samples they send for testing are consistently “perfect” which is an oddity in and of itself, that’s unlikely to be the case without some tampering. All of this combines to create an environment in the fluff where there is a definitely playing with gene seed going on, on Mars. 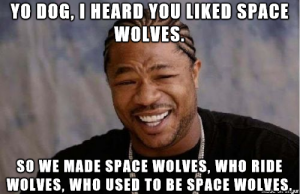 The idea of creating new Space Marines using a new process is seen in the fluff furthest back in Deliverance Lost by Gav Thorpe.  Deliverance Lost is a Horus Heresy novel focusing on Corax, Primarch of the Ravenguard, and his quest to restore his legion after the disastrous events of Istvan IV. Corax and a small remnant of his Legion travel to Terra, in a psychic audience with his father Corax is given the knowledge required to find the locked away remnants of the Primarch Project. Having acquired the necessary technology from the vaults under the Himalayas with the help of Mechanicus Magos Biologis Nexin Orlandriaz, a small cohort of Custodes, and Raven Guard he sets off for Deliverance and begins the process of breeding a new Legion. 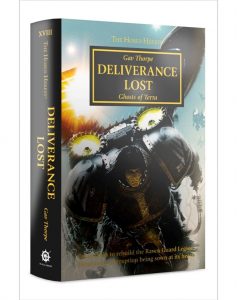 Through the efforts of Corax, Magos Orlandriaz, and the Ravenguard Chief Apothecary Vincente Sixx the Emperor’s secrets to the Primarch Project and their progeny, the Adeptus Astartes, are unlocked. Corax decides to create Space Marines that are better than those produced by the Emperor. With decreased time required for maturation, increased strength/speed/senses beyond those of a normal Space Marine, the Raptors as they are dubbed by Corax, represent a leap forward in the fluff from the normal Space Marine. The advanced maturation rate was explained in a conversation regarding infants implanted with new Gene Seed a mere 40 hours before.

“That is remarkable. Eighty hours to turn a boy into a legionary? Well, in body at least.”(Thorpe 357).

During their research into the Primarch Project a lot is revealed about the various Primarchs and the problems inherent in their various Gene Seeds. Corax hopes to create a brand new Legion of super marines in a short amount of time and surprise Horus with a tide of vengeful Ravenguard whose abilities outstrip those of the Traitorous Legions.

“Our recruits will emerge from the process with mental and physical aptitudes beyond anything we’ve seen before. They’ll be quick learners too. A little bonus of the primarch material. Our new legionaries will be primed and ready from the outset.” (Thorpe 358).

While the Raptors perform exceptionally well in their trial battles; the forces of the Alpha Legion, which had infiltrated the Ravenguard after Istvaan, tainted the project with Chaos causing the second round of Raptors to mutate horrifically. The project is then stolen by the Alpha Legion and Corax’s dream never becomes a reality. The groundwork was laid in the fluff though for the possibility of creating Super Marines, and the necessary players. A Mechanicum Magos and the mind of a Primarch. See any parallels yet? 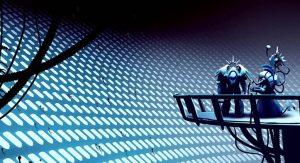 The second place we find “new” Marines being created in the fluff is Battle of the Fang by Chris Wraight. Battle of the Fang takes place in M32, just after the events of the Heresy, at least in terms of the millennia that separate almost everything in the fluff, and Magnus the Red Daemon Primarch of the Thousand Sons has become aware of the ambition of Space Wolves to fix the Canis Helix and create successor chapters in numbers large enough to fully encircle and patrol the Eye of Terror. The first, and only, attempt at a Space Wolves successor Chapter the Wolf Brothers ended in calamity as they all succumbed to flaws in the Canis Helix. Wolf Priest Thrar Hraldir, known as Wyrmblade, had unlocked the secrets to recreating Space Wolf gene-seed without the inherent flaws. This included the flaws that made the Canine teeth grow like fangs, the enormous beards, and even the propensity for the initiates to become slavering, hulking, Thunderwolves. 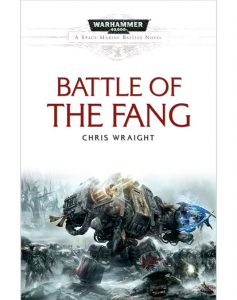 “‘The Wolf,’ he said at last. ‘The curse and the glory of our kind. For a generation of mortals, I have worked on a cure for it. No fleshmaker has ever discovered more than I of the ways of the Canis Helix, perhaps not even those who arrived on Fenris with the Allfather himself. It became clear to me the curse could be eradicated while preserving the glory. This work has been my calling.’ ‘The Tempering’ breathed Morek. ‘indeed. I have refined the Helix, altered it to deliver the strength of the Adeptus Astartes without the ravages of the beast within… they do not degenerate, nor do they fall prey to the Wolf.” (Wraight 276).

Having learned how close Wyrmblade had come, Magnus used the Great Wolf Harek Ironhelms obsession with him to pull the Space Wolves away from the Fang so Magnus could assault the fortress and destroy Wyrmblades work once and for all. The threat of the Vylka Fenryka becoming stable enough to make large numbers of successor chapters on the same level as the Ultramarines, was too great a threat to the pawns of Chaos. 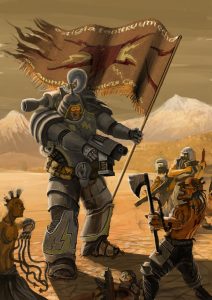 There are other examples of “super” marines in the Warhammer 40k and 30k fluff. The Thunder Warriors, the primogenitors of the Space Marines, who the Emperor used to conquer Terra were larger and more powerful Space Marines. The Thunder Warriors did not have as long a life span as Space Marines, the Astartes in the Horus Heresy novels particularly Loken discuss the Astartes as immortal unless killed, and they often succumbed to genetic flaws quickly. They were the template for the Legiones Astartes and were eventually wiped out by the Custodes on orders from the Emperor in order to fulfill the Unification of Terra and remove the threat the Thunder Warriors posed to the newly united Earth. The Custodes are another example of uber Astartes in the fluff. They are often able to scythe through numerous “normal” Space Marines before being brought down by the larger numbers of the Adeptus Astartes. Even among the Space Marines themselves there are those who are superior, the Grey Knights. The Grey Knights are carefully selected for their extremely powerful psychic potential and are perhaps even the gene sons of the Emperor himself. Grey Knights are often shown as being superior to a “regular’ Space Marine.

The Primaris Marines are not an entirely new concept for Games Workshop. The whole notion of needing to correct mistakes within the gene seed, or needing more powerful Space Marines with specialized equipment and abilities is evident throughout the fluff of both 40k and 30k. From the Thunder Warriors of Unification, through the Custodes, Primarchs, Raptors of the Corax’s project, the fixed Space Wolves of Wyrmblade, the Grey Knights and now the Primaris Marines the creation of newer and better Space Marines is a common theme and goal of the many characters in 40k and that’s just the Loyalists! When you take into account Fabius Bile, Angron’s implanting of the Butchers’ Nails, the cloning of Horus, and the various other ways the Chaos Legions have attempted to augment themselves and create more powerful Astartes it becomes even clearer that GW never intended to have a world in which stagnation of their factions, models, and story line could occur. Not to mention many of you reading this have been complaining about wanting “true scale” marines for years, so stop complaining. 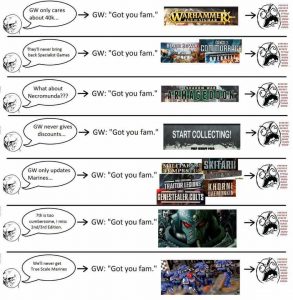 So what do you think?

37 Responses to “The Primaris Marines have their Roots in the Fluff. Relax.”