A Beginner’s Guide to Skorne

You are here: Home › Tactics › Warmachine › A Beginner’s Guide to Skorne

Hey guys, this week we look at the Persian Empire of Immoren, Skorne, where pain is a commodity, and giant bipedal elephants wear armor, and kill everything in sight!Check the Tactics Corner for more great articles!

Hey guys BigVik here with another beginner’s guide, this week we’re looking at the great empire to the east, Skorne!

For much of Immoren’s history the Skorne Empire has had dreams of conquest. Arisen from a variety of feuding tribes that dominated the harsh and unforgiving environment of eastern Immoren. They learned to survive and even prosper despite the cruelties of their rugged lands, Warriors to the core, the skorne use dark arts called Mortitheurgy to push their bodies past normal limits and to fight on past death. Skorne armies sport numerous captured and enslaved beasts, brought to heel by the whips and barbs of paingiver beast handlers. 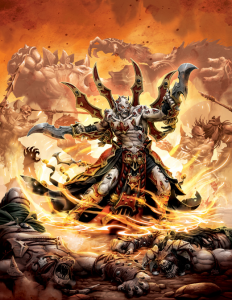 Cygnar’s deposed king Vinter Raelthorne IV changed all of this when he crossed the wasteland between Cygnar and the east. After bringing the Empire under his dominion, Vinter set his sights on his lost throne. Now a united Skorne Empire marches on the Iron Kingdoms, intent on conquest and domination.

Skorne’s playstyle is a combination of high threat beast slingshots that can deliver a bronzeback across the table with enough attacks to remove almost anything from the table. The Skorne theme force allows for ranged infantry spam which can deliver withering volleys to attrition opponents down. As of such many Skorne pairings will have a ‘Hammer and Anvil’ kind of build, one list that dishes the pain out, and the other that can take it and keep ticking. 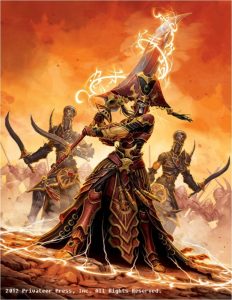 Warlocks in Skorne have themes of pain, soul manipulation, threat range extension, and lots of buff juggling, as well as a plethora of other themes. 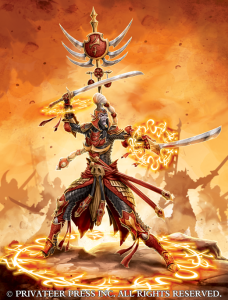 A good example of threat range extension is Archdomina Makeda, Makeda 1, who can either deliver her character beast, Molik Karn, with a threat range of 19” including sidestep, quicken, and rush from a Gladiator, to deliver 4 mat 7 pow 16 weapon master hits to the victim of choice, afterwhich Makeda can Jackhammer Molik Karn up to 5 more times for a maximum of 9 mat 7 pow 16 weapon masters to the face, once this is done, makeda feats and runs her infantry into jam the opponent up. Her feat gives all living models in her control range Retaliatory Strike, if you hit them they hit you back, and if a friendly living warrior model is disabled, Makeda can suffer a damage to heal a box on the friendly model. This means that for one turn Makeda has better attrition than Harbinger of Menoth, the quintessential attrition caster in the entire game. 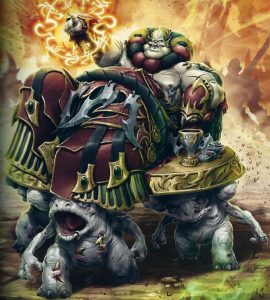 Our pair to Makeda’s threat overload is Dominar Rasheth, think hedonism bot from futurama and you’re not too far off. Rasheth is the resident spell caster of Skorne, with dark rituals, he can use friendly faction warrior models in his control range as mini arc nodes, in exchange the model takes 1d3 magical damage. This makes the threat range on his spells a reliable 28”, and between him having blood mark, an armor debuff on an enemy model that lets Rasheth transfer damage to an enemy model when he’s damaged, to breath of corruption which plants an aoe 3 that hits everyone under it for pow 12, and leaves a cloud hazard that gives 1 corruption damage to models entering or ending their activations in the aoe. Rasheth is great against dude spam, especially when he pops his feat, which debuffs the strength, defence, and armor of enemy models in his control area, and he heals a damage every time a living model dies, that goes for yours and his, your turn and his. Rasheth is super hard to kill, and can debuff very well, making him a solid choice if you like the attrition game.

I love these guys, they make for a great pairing where you look at your opponent’s pairing and ask the question, should I hammer them to death, or attrition them to death? 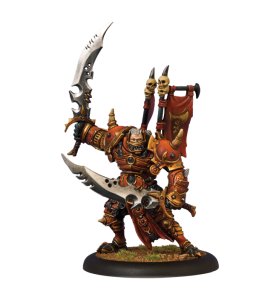 The beasts of Skorne are quite varied, from the savage cyclopes, who have dice manipulation, from future sight, choose to boost after rolling, to intuition, which forces your opponent to reroll a successful attack roll against him. The Aradus chassis are a pair of insectoid beasts both of which have armor 23 against free strike and ranged attack damage rolls. To balance this out they have a base speed of 3, pathfinder, and advance deploy, for the record the sentinel is a great ranged heavy beast. The final beast chassis I’ll be touching on are the basilisks, all the non character basilisks are light beasts, one has a magical pow 14 spray, very scary depending on the situation, and the Krea. The Basilisk Krea is potentially a faction defining warbeast, its animus allows the spellcaster (this means the warlock can cast this as well each turn) and models within 3” of it to have a defence and armor buff against ranged attacks. This means the whole faction has access to a good way to weather your opponent’s ranged fire while you close to grips, a great beast that definitely sees a ton of play. 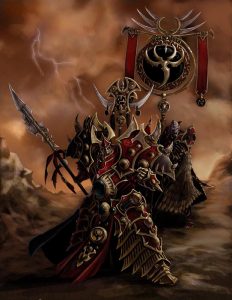 The warriors in Skorne have a bunch of different themes to them. Cataphracts are the big beefy infantry, sporting multiple boxes and tough mean it takes multiple attacks to remove these guys on average, furthermore 2 of the 3 current units are weapon masters, making them great at removing non colossal jacks and beasts. Immortals are the preserved souls of fallen Skorne warriors, contained within a living statue, these guys are low defence, high armor, hit hard, and have vengeance, if you damage a model in the unit the whole unit gets to move forward and swing in your following maintenance phase. 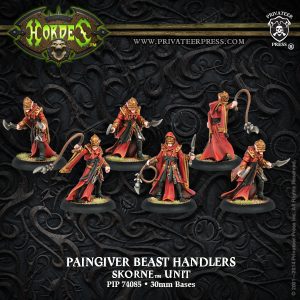 Paingivers are guys who love to hurt things, the most prolific of them are the Paingiver Beast Handlers, who really make the Warbeasts in Skorne shine. They have the ability to put/take fury on/off of beasts, buff strength, heal, and give free charges (keep in mind they can give free charge and 1 of the other 3 abilities). These guys are what make Skorne beasts as scary as they are, and should be eliminated on sight if you are playing against them. 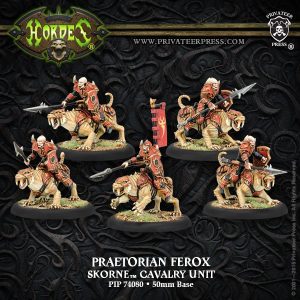 Between the Praetorians and Venators you get the proper battle line of Skorne. Praetorians are the professional soldiers  and sport swordsmen, tarpit spearmen, and most notably, the Ferox. These guys are great cavalry because of their threat range, they either charge with a 13” threat  to hit with a double boosted pow 14, or they move 8”, jump 5” over your opponent’s models, for a combined 15” threat, all very good numbers. The Venators are the conscripts of Skorn, they mostly prescribe to skirmisher tactics and use a variety of ranged weapons, from reiver guns which get stronger the larger the model hit, to the slingers who have a variety of utility shot types and arcing fire, making it very hard avoid the slingers shooting at you. 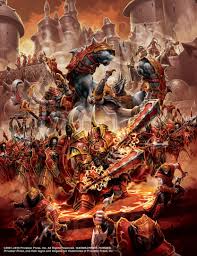 Although Skorne is not considered to be the top of the pack, I’m loving what they can pull off after their overhaul by Privateer Press! They can play a decent ranged game, they can throw a threat overload beast brick at your face, and they have some of the best spellcasters in the game. All in all Skorne is a great faction that can be very rewarding to play!

Come back next time for shoes and handbags, we’re gonna talk about Minions!