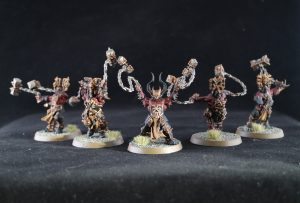 Hey everyone, Josh here to discuss the units that are available in the Blades of Khorne. This time we’ll be discussing a niche unit, Wrathmongers. For more tactics articles, check out the Tactics Corner!

Wrathmongers are niche unit in the Bloodbound army. Wrathmongers are neither daemon nor mortal (despite the keyword on their warscroll). They’ve fully embraced the path to daemonhood and have accepted daemonic gifts that cause even the most noble warrior to slather into a mindless rage. 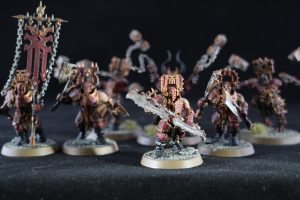 Wrathmongers are excellent for alpha striking all but the most resilient units in the game. They are great tools for supporting units on defense and keeping larger high damage models such as behemoths, monsters and elite infantry in check. When they attack, they’re usually hurdling toward larger enemy models to take advantage of Bloodfury.

Bloodfury is the primary reason to take Wrathmongers. Each time your opponent kills a wrath monger in combat, you get to chose a single enemy model within 2” and force it to attack (but not pile-in) as if you were in control of it. You can even make the model attack itself. This ability alone makes Wrathmongers excellent for killing large models.

The Rules Lawyer : Here’s a question for you. Damage in age of sigmar is applied in sequence after attacks are resolved. If 15 wounds are being applied to a unit of Wrathmongers then do you allocate wounds individually, apply the wounds sequentially and resolve Bloodfury each time a model is slain; or do you allocate all of the wounds being done for the attack and apply them at the same time? In one case, Crimson Haze would still apply to your enemy’s models until the final Wrathmonger is slain, but in the other Crimson Haze would not apply because the Wrathmongers would all be dead. I’ve scowerd the rules regarding damage allocation, but I cannot find any text that allows me to make a detirmination. Let me know what you think in the comments below.

The characteristics on their weapons are awesome as well. A single unit of five Wrathmongers can make 21 attacks before buffs, have built in buffs to hit rolls on a charge and have rending weapons. Additionally, a 2” weapon range means that usually you’ll be able to strike your opponent with the full unit. Alpha striking Wrathmongers usually put a dent a huge dent in whatever they strike. 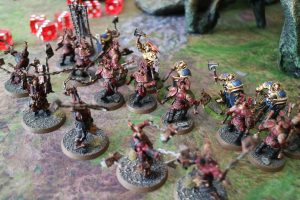 Crimson Haze makes Wrathmongers an excellent supporting unit. They can easily buff your units and avoid your opponents units while standing behind the frontline. They can also provide additional damage output by making a charge behind your alpha striking unit, but this is much more difficult to accomplish.

Wrathmongers aren’t as dependent on buffing the attacks characteristic as other units are. They already make 4 attacks per model, and can opperate effectively outside the range of a Bloodsecrator’s Rage of Khorne. Instead focus on suring up the attacks they already make and don’t be afraid to send them into the fray if it will help you win the game.

At 180pts, Wrathmongers are Bloodbound’s most expensive non-hero unit, they only have a 5+ save, and they’re slow. This puts them in a strange position. They’re excellent for taking down lerger models and alpha striking, but die like flies if they’re being shot by ranged units or attacked by light-medium infantry. Keep them behind your defensive line and buff your troops with crimson haze until the time is right to strike.