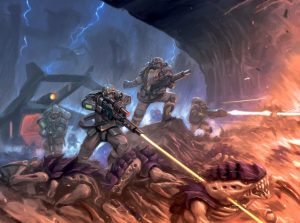 Loopy here to help suss out something that’s been a hot-button issue of late. I was wondering about the actual feasibility of 100 brave Guardsmen of the implacable Astra Militarum taking out a tank with their Lasguns. After a few short Google searches, I have learned that it’s a lot more believable than you’d think.

It turns out that lasers are actually quite awful at killing people. Because of the nature of our bodies being made of, primarily, water, it takes about 50,000 joules of energy to kill a person with a laser. Some sources say you could use a weapon with an output as weak as a Kilowatt, but you’d have to shoot them right in the eye. At any rate, this is WAY more energy than a bullet requires. Of course, the reality of energy storage in the far future may mean that you can actually store more laser shots in a clip than bullets. But who knows what the reasons for using lasers are instead of the cheap and reliable bullet?

Who, indeed! You know as well as I do that there are things other than people that need to be shot at in the 41st Millennium. Things which lasers might be much better at killing. Things like… tanks!

Let’s continue with my assumption that a standard Lasgun’s output is about 50,000 joules, again, because it has to be able to kill your average human. In the game of Warhammer 40,000, a unit of 100 guardsmen could, at the maximum effective range of their lasguns, pump out 5,000,000 joules of energy into a tank. Of course, you need to concentrate all of that lasgun fire into a single spot on the tank in order to be effective. Well, that’s probably why you still need to roll to-hit when shooting the tank. Sure, you’re probably not gonna miss completely (it’s a TANK after all), but if your lasgun doesn’t add to the destructive power of the other lasguns, you’ve effectively “missed” the target.

So, we must acquiesce and reduce our destructive power by half in order to represent the Guardsman’s 4+ to hit: 2,500,000 joules.

1 ton of TNT produces the destructive power of 4,000,000,000 joules. That’s a lot of TNT, but we can calculate the destructive force of our barrage as being equal to about 1.25 pounds of dynamite.

Now, imagine that barrage at a range of 12″. Our damage output effectively doubles to 2.5 pounds of dynamite.

Add in a First Rank, Fire! Second Rank, Fire! and your destructive output increases to 5 pounds of dynamite. This is 10,000,000 joules being pulsed at a tank (and pulsing a laser works much better than a constant beam for whatever reason) in a very directed fashion. It’s not like an explosion near the tank… it’s being focused.

I don’t think this is too outrageous when you do the armchair math. This is also considering the output of the laser is probably better than I am assuming. I know I’ve read accounts where a lasgun has vaporised chest cavities and melted heads. Having said that, it’s always good to be conservative when calculating the real-world effects of fantastic magic and technology.

If any REAL physicists want to chime in, I’d love to hear your opinion/math.

← Signals from the Frontline #532: Primaris Marines on the Way!
It Ain’t Easy Being Green- The Evolution of Orks in 40k →

8 Responses to “The Mighty Lasgun”