Hello Frontline Gaming fans, TFG Radio fans, and lurking haters. SaltyJohn here with an article all about what I’m looking forward to about New Hammer 40k from the perspective of a Head Judge for the LVO/ITC. 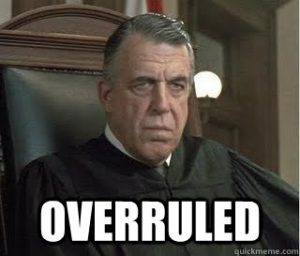 As some of you may know I am one of the head judges for the Las Vegas Open and I help with the ITC FAQ and other tournament docs. Over the course of the last edition of 40k, and my time helping the ITC and LVO, I’ve been able to get a better grasp of the game of Warhammer 40k than I had as just a player. When the game is viewed through the lens of a Judge and Tournament Organizer you gain a completely different perspective of the game, meta, rules mechanics, and a certain clarity in regards to the problems inherent in the game system. If you’ve been following TFG Radio, or my battle reports for them, you’ll know that one of my biggest complaints about 7th edition 40k was mission design. After LVO I took a look at Warmahordes mission design and, more importantly, Age of Sigmar missions and began to work out First Past the Post missions designed to curb slow play and reward games that finish. 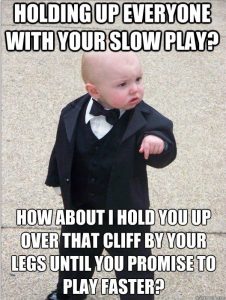 It’s probably a bit pie in the sky on my part, as they haven’t released anything about the missions as of my writing this, to hope that the Missions will be drastically redesigned. However if we take GW at face value for having listened to us, which all evidence points to them having done, and we trust that Age of Sigmar was indeed a template for newhammer then I feel pretty good about the missions being effectively redesigned with competition in mind. Games coming to a “natural conclusion” would really be a boon to the health of the game in my opinion. It’s obvious to anyone who has followed 40k since at least 3rd edition that slow playing to win a game has been an issue. In recent years it seems to have reached near fever-pitched, or pandemic levels if the internet is to be believed. Having been a head judge at LVO this year, I must attest to the fact that not only is slow play a real issue, but it’s only symptomatic of two much larger issues in 40k: mission design and the meta itself. 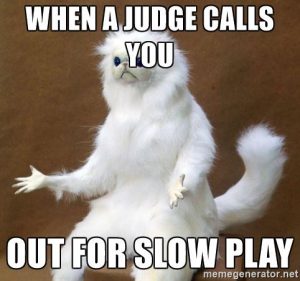 The meta of 40k is going to shift significantly with the release of new hammer. The first way this will happen is going to come from a paradigm shift in the core rules, away from complex towards the more simple.

Simplification of the game on multiple levels is good for the game period, but it’s even better from a TO perspective. The more clear cut the rules the easier it is to adjudicate disputes between players and the less likely for one player to feel slighted with a ruling. Simplified rules also mean less time wasted in game and less hand holding by judges. The removal of templates alone helps the game so much. As a judge I have literally had to take the barrage templates in hand and do the scatter for the players because the amount of arguing over the templates that had occurred between the two. That’s a thing of the past! With simpler, hopefully clearer, rules other odd situations can hopefully be avoided. By the end of 7th it had become quite common to see Riptides magnetized at the waist. Invoking “wobbly model syndrome” Tau players would take the torso off the Riptide so it could fit places that it clearly could not have; like second floors of a 3 story ruin etc. I then would have to explain that there is no mechanic in the rules through which you may disassemble a model to place it. While not a direct result of the rules, it is certainly indicative of the type of liberality taken with the rules; which I attribute almost entirely to the bloated and unclear nature of 7th edition.

No. More. Deathstars. The end of death stars through new character rules and fixing of psychic powers is going to breathe a lot of new life into the meta. It will also begin to roll back the rock, paper, scissors style army lists of 7th edition. When you couple the end of the Death Star list with the increased resiliency of a lot of units in the game, particularly vehicles, you have a recipe for a third major shift in the meta. You may be asking: why as a judge would I be so concerned with the meta? A healthy and fluctuating meta is good for the game, good for the players, and important in providing a positive experience to the players at an event. As a TO/Judge I understand there’s a competitive aspect to a tournament, but there is also a fun aspect. Part of the fun can be ruined by a stale meta in which certain lists simply trounce most other lists and are almost required for a player if they want a chance to win the event. Playing against one of these lists, without one of your own, is no fun. Even playing one of these uber lists with another uber list can be excruciating. The other side to that is people want to come to an event and feel like they have a chance to win with what they brought. I like to win games, most of us do or why else would we play in tournaments, but it isn’t any fun if you think you’ve got no chance from the beginning, because you are pigeonholed into taking certain units that are markedly better than all the other choices in your faction. 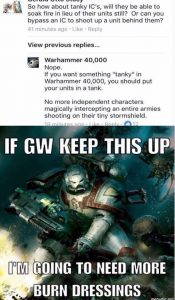 Increased viability of every unit in the game would be amazing for the game as a whole, and the competitive scene. As a TO it is important that a wide range of armies are represented, this has nothing to do with rules disputes. As a TO it is important that players have fun and want to return to play again, diversity of armies and lists is an important component to making things fun. One of the biggest complaints near the end of 7th edition was that every army seemed to be Riptide Wing plus X. Or Eldar minimum CAD with Wraithknight plus Y. That isn’t good for the health of the overall competitive scene let alone events on their own. The few articles we’ve seen from GW on the factions have implied that all the factions will have increased viability for all the units in a range plus the death of Formations and Death Stars. Those three facts from GW about Newhammer is, in my opinion, some of the best news we’ve heard thus far. I can’t overemphasize my optimism with Newhammer 40k from both a player and Tournament Organizer perspectives.

What do you look forward to most in regards to competitive play now that newhammer is imminent? Let us know in the comments!

*NOTE: “Free” units weren’t discussed in this article because as of publication we didn’t have any official word on whether or not GW was doing away with “Free” units via detachments or summoning.