The following was taken from the Warhammer-community page.

Today we take a look at the biggest models in the game, and how they’re going to work in the new edition.

There are a few big changes here, though we covered some of them a little when we looked at profiles. Like the three units we’ve seen already, every model will be using the same profile system, so everything will have Wounds, Toughness, Strength, etc… This includes all vehicles.

We’ve also gotten rid of specific rules for Gargantuan Creatures and Super-heavy vehicles. Instead, these units will have a suitably impressive statline, but still play by the same rules as everyone else. This also means that those units that previously sat just shy of Super-heavy status, and missed out on bunch of special rules because of it, will now be appropriately killy and durable. 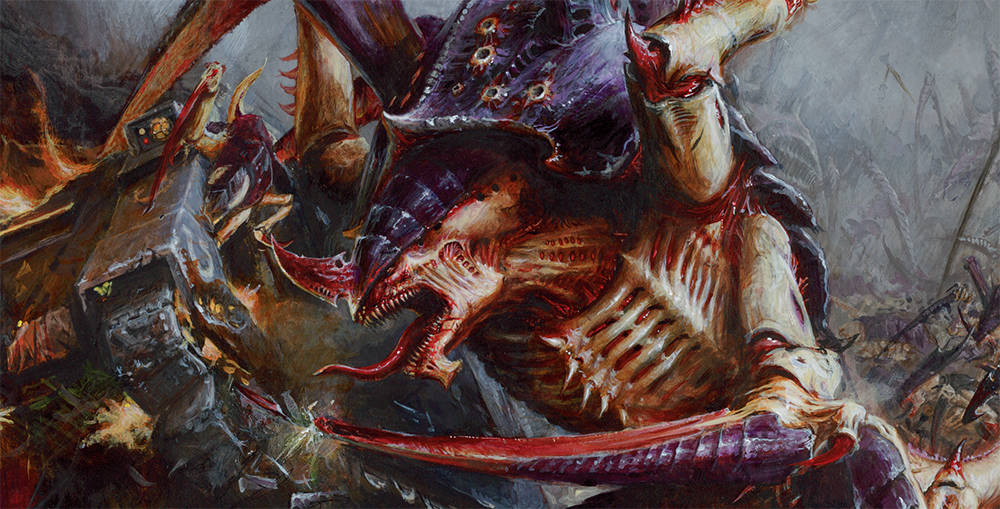 You’ll soon see that some of Warhammer 40,000’s biggest hitters have A LOT of Wounds, high Toughness and a good save. The biggest Tyranid monsters now have over a dozen wounds, where Imperial Knights have over 20!

This makes them almost infinitely survivable against small arms fire, but means that high-power weapons that can take chunks of wounds off at a time (lascannons, powerfists, battle cannons, etc) can take them down relatively quickly when brought to bear in force. Gone are the days of a lucky first-turn meltagun blowing up your Land Raider. (A squad of them will still ruin its day though…)

There are almost no weapons in the game now that can instantly kill these big guys, so there will be no shortcuts to dealing with them – you have to get your hands dirty and take those Wounds off.

This can make big models very powerful, but there is a counter mechanic in the rules. As these large, powerful models take damage, their combat effectiveness starts to degrade. The best way to show you this is with an example.

Here we have a Mork(or possibly Gork)anaut (as requested by Stacy from our Warhammer 40,000 Facebook page):

Whoa, so – with 18 Wounds at Toughness 8, this guy is a tough cookie to crack – able to wade through bolter fire untroubled and requiring a lot of heavy weapons shots to take down.

You can see, though, as it gets to the point of only having half its Wounds left, this walker starts to get less effective – it will move slower and its attacks will get more clumsy as servos are fused, and sensor arrays fail to register.

At 4 Wounds left, it’s all but crippled, though its shooting output will be undiminished – so it starts as a combat wrecking ball at the beginning of the battle, crashing through enemy lines, and ends up as more of a semi-mobile shooting fortress at the end of its life.

Different vehicles will be reduced in effectiveness in different ways too – some will get worse at shooting, some will slow down, and some some will become less effective in melee.

We’ll be back tomorrow with some good news for the little guys, when we look at how infantry work, and how combined firepower can be used to topple even the mightiest foes.