Did you think we were finished with Cadia?

We saw the fall of the fortress world as the catalyst that began the events of the Gathering Storm. Abaddon’s greatest Black Crusade smashed against the defences of the planet in overwhelming force, but not before the world’s defenders enacted a devastating toll on the attackers.

The planet’s stubborn defence also bought the Imperium precious time to entrench forces on neighbouring worlds and systems; siege works were dug, artillery emplaced, and weapons raised to the sky to await the coming onslaught.

Abaddon was successful though, and following the fall of Cadia (and possibly, because of it) a great warp rift rent the galaxy in half, allowing the forces of Chaos to launch their attacks across the entire length of the Imperium.

As they dispersed, though, their strength around the Cadian Sector – as well as in and around the Eye of Terror itself – thinned. Many warbands of Traitor Legionaries and renegades, some in direct disregard of the Despoiler’s orders, used the opportunity to bypass the defenders of the Gate entirely and launch their attacks on more vulnerable worlds elsewhere in the galaxy.

This has left huge numbers of Imperial defenders deployed around Cadia awaiting a coordinated Chaos second wave that may never come. There are whispers in Imperial Sector Command of the possibility of retaliatory strikes, of claiming back some territory lost in the recent war, and even of reclaiming the ruins of Cadia herself. 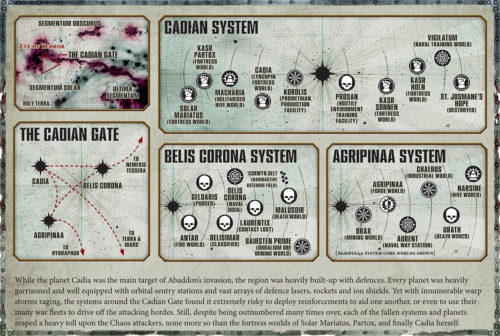 Poised around the Eye sits a force of Space Marines rivalling that of the Legions of old, entire Knight Households, and of course, the orphans of Cadia themselves – more than 200 regiments of Astra Militarum shock troops eager for vengeance.

Cadia may have broken; the Guard, have not.

We’re sure a few of you Imperial players have been itching for retaliation since the Storm came to Cadia. Maybe your time is now…

We’ll be back tomorrow with more news on the new edition, when we look at how the biggest models in the game will work.

← Orc ITC Terrain Bundles up for Sale!
Newhammer and the Blood Angels – Movement →