Hello everyone, Danny from TFG Radio here to continue my quest to stay hyped for Newhammer and see how the slowly flowing rule spoilers are going to impact the manifest destiny of the Tyranids.  Be sure to check out the other factions over at the Tactics Corner or just read all of my soon-to-be-defunct articles on Nids in 7th.

Walking out of Combat!

So GW dropped that much like Age of Sigmar, units can voluntary leave combat during their movement phase.   Why does this help the Tyranids? Again, we have lots of little bugs.  We can use them to effectively screen our big hitters and on  our turn, move them out of the way so the big nasties can get in there and represent for the Hive Mind.  It also lets us shoot the enemy before charging in, and our shooting is decent at close range and pretty much all assault, so we get the 1-2 punch of shooting and then assaulting, and this really helps us make sure that our big bugs will finish the job.

Really, this plays to the Tyranids’ current strengths of having strong close-range shooting, so if we can better combine that with our melee punch, we can be a real threat once we get close. 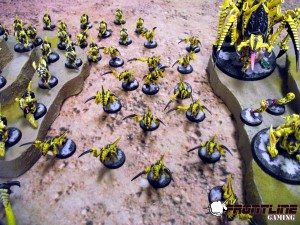 Ok, this one is a little bit of give and take.  Units being able to overwatch more than once, assuming no one makes it to them, can be brutal for us.  No lie about it.  That said, there is some silver lining here. First, only having to get within 1 inch of an enemy does essentially add to our native threat ranges, so that’s a small bonus.  Now, if you are three inches away, snake eyes doesn’t actually screw you.  It ever so slightly plays with the math, and again, for us assaulting, it is a nice bonus. You can be a bit more assured that Math is on your side when making charges under 6 inches or so.

Overwatch can help us in a weird way, namely large Gant-Screens like Termagants.  If you take 20 or 30 of these little bugs, they make for a nice bubble-wrap to keep other unit safe, but even with just Flesh Borers or maybe Devourers, the overwatch hits can be real, especially if the opponent fails a charge and they get to shoot again.

Really, what we are seeing here is a big shift towards having the little ones in our armies, at least from what we can see.   Long live the Gant-Screen! 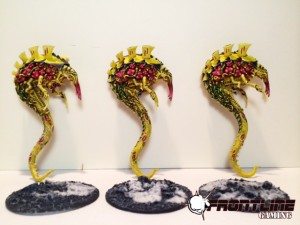 Cover is a bonus to armor save now!

So again, on the surface, it is easy to see this and think that it hurts us, but in many ways, it does not.  This actually helps our big bugs stay a bit safer as we typically have a 3+ armor save for all of our big guys (except Harpies, Crones, and the Toxicrene), and if a Lascannon is now -3 AP, that is likely the biggest modifier you are going to see.   This means that yes, a Lascannon is likely going to give our biggies a 5+ at best if we have cover, which isn’t great to be sure, but what about other weapons like assault cannons, scatter lasers, and any other higher strength weapons that didn’t necessarily punch our armor?  If we have cover (who knows what Venom/Malathropes will do), suddenly our MCs go to a 2+ save!  That makes them far more resilient to high volume weapons that don’t impose a big armor penalty.  While the new rules seem to favor the little bugs, even our big bugs get some mileage out of them.  Our little bugs are going to get hit by the cover change as they don’t rock a decent armor save to begin with, and without 4+ cover, well, they are going to die faster to be sure.  Then again, they died pretty quick already, and they are supposed to die.   With the new changes, little bugs will still be quite valuable, so just take more of them. 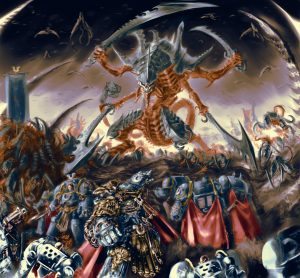 So, in the most recent posting, Tyranids get name-checked twice.  First, good old Swarmlord gets to hit on a 2+ in combat, so yay!  It is a nice boost to our best melee fighter to make sure more of those attacks are going to land.  Also, Lash Whips get called out as allowing Tyranids to interrupt the normal flow of selecting which units fight in combat after chargers, so we can deduce that this means that Lash Whips allow you to swing first before a unit you are engaging swings. Again, Hive Tyrants and Warriors get a nice boost there.

Finally, you can now drag units into combat via the 3 inch pile-in move, and this is a big help to us.  If you successfully get a large unit of Gants or even a brood of Carnifexes into the fray, through canny positioning, you can swing in and grab another unit.  This also avoids Overwatch, so against non-Tau, it lets us hit a softer unit that doesn’t have as mean of Overwatch and then hook in the other unit that might have 10 flamers in it.

Melee bugs are definitely getting more a boost here. 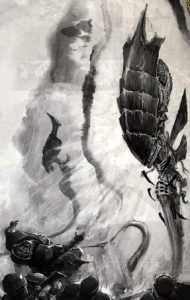 Until we know more about Shadow of the Warp, I cannot reasonably comment on the psychic phase info, except to say that Smite isn’t too terrible for Tervigons. Being able to throw out a few mortal wounds isn’t too bad for a bug that is easy to forget is even a psyker.  I do hold hope that with the new changes to manifesting powers that if Shadow in the Warp imposes a penalty to the roll, that would really, really be sweet.  Here’s hoping.

Thanks as always everyone, and I’ll be back next week with more positivity for the Hive Mind.  Be sure to check out TFG Radio, and of course, keep getting those bugs ready for Newhammer!  For me, I’ve finished painting every bug I own, but of course, I just ordered a bunch more…

4 Responses to “Tyranids: Looking Ahead (part 2)”