Requizen here, with another look at the Stormcast Battletome! Welcome to the final look at upgrades for your Stormcast Heroes, or rather, for their trusty steeds!

The last set of upgrades that you can choose for your Heroes (and there have been a lot so far) are the Exceptional Traits you can apply to mounts. At this point in time, that’s only the Lord Celestant on Stardrake, Lord Celestant on Dracoth, Drakesworn Templar, and Lord Aquilor (on Gryph-Charger). You can have one Exceptional Steed per army, plus another one for each Battalion. These are not Artifacts, so you can have an Artifact and a Trait on a mounted Hero, which can lead to some really powerful Heroes! 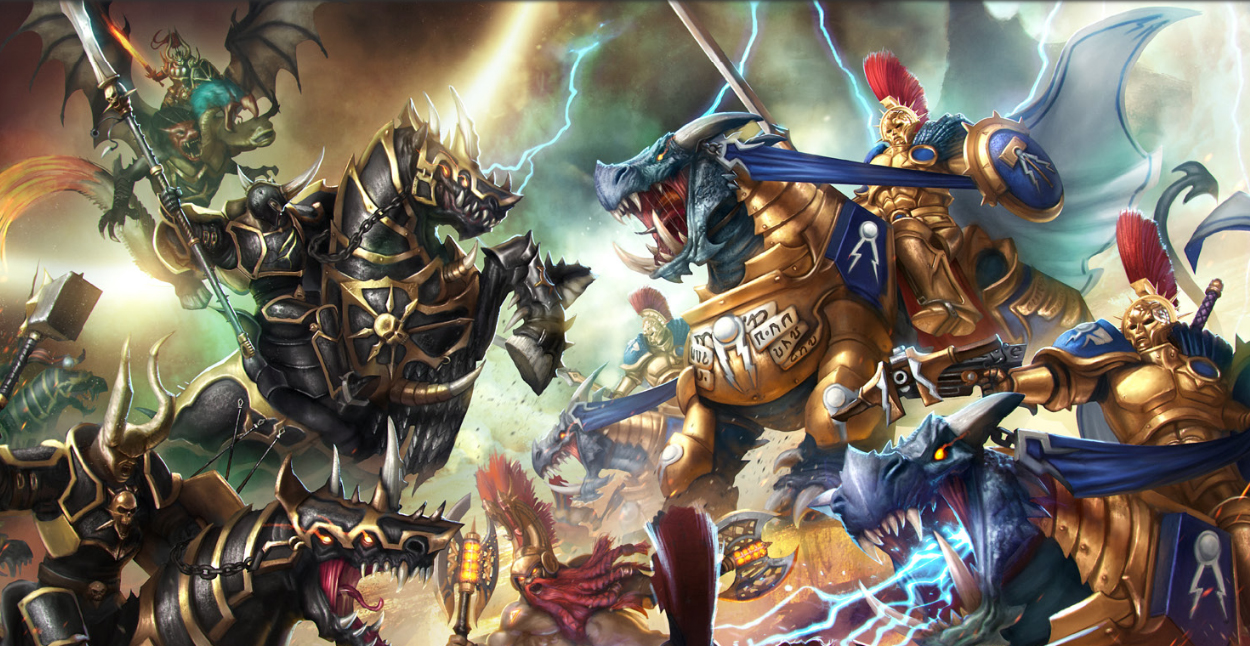 First up, there are 3 traits that all mount types can choose from:

Some nice picks right off the bat! Lithe-Limbed can give a bit of extra mobility to your Hero, and can get you in charge range faster. Savage Loyalty is sorta fun if you’re expecting to kamikaze your dude into combat, but is unreliable. Keen-Clawed is a big winner here, Rend -3 is amazing, even if it is only on 6s!

Then there are 3 traits per mount type that you can choose instead, depending on what Hero we’re discussing.

All those Liberators are immune to Battleshock, suckas!

Drake-kin is a pretty nice defensive option, since multi-wound damage is killer on our Heroes. Pack Hunter has a place in Dracoth heavy lists, so for a themed army that might be really good! This guy riding next to some Fulminators can put out some serious damage! But I personally like Thunder Caller. Even though the breath weapon is a bit unreliable, getting some extra range can help your Lord-Celestant put out some extra damage on turns where he might not have been able to hit anything previously. Though I probably see most people taking Keen Clawed, as it makes your 6s to Wound into Rend -3 damage d6, which is pretty much d6 MWs to most units in the game! Thunder Caller might end up being more useful if you can’t catch the opponent, though.

I think a Pack Hunter is a great Narrative trait to take if you’re running something more Extremis Chambers focused. It could be really fluffy to have a Lord-Celestant on Dracoth who fights fiercely on the front lines of his force, emboldened by his fellow warriors! Especially in a fun narrative game, where you can bring one of the Extremis Battalions and two Lord-Celestant on Dracoths, each with this trait, now you have lots of Dracothian Guard and two heroes who are getting more damage.

Lightning Warriors riding Dragons. WHAT MORE DO YOU WANT?

Then there are some options for the giant lightning lizards that everybody loves:

Storm-winged seems interesting, but how often do you fly over units? It’s pretty rare. On the other hand, Thunderlord might be extremely good against Horde type armies, giving you more range to clear out Grots, Skeletons, or Free Peoples! Star-branded is hard for me to tell –  a lot of times, one “tier” of the damage table doesn’t make a huge difference, and it only matters if you’re right on the edge between two. But on the other hand, it can occasionally make you hit much harder than you would otherwise.

For Stardrakes, Keen-clawed is still a nice go-to. Stardrakes are only Rend -1 for some reason, so occasionally punching a bit harder is a nice default. But Thunderlord could be a great choice for a Drake that prefers to decimate his opponents from a range, or Narratively one who is known for their potent breath weapons! A nice upgrade for a Stardrake who has previously blasted off armies worth of models and wants to keep it going. Don’t mind me, just taking my GIANT BIRD HORSE for a walk.

And finally, the most recent (but no less awesome) addition to the Stormcast Hero range, the Lord-Aquilor and his buddy:

Not surprisingly, the Gryph-Charger ridden by the Lord-Aquilor has two options focused on mobility, on top of the standard Lithe-Limbed. He’s your speedy Hero, designed to get around fast and threaten vulnerable targets. However, while Wind Runner and Indefatigable are nice picks for just increasing speed overall, I think Aethereal Stalker is a going to be a sleeper hit. With his Compass and Command Ability allowing the Lord-Aquilor to pop up on various table edges, the ability to pick a vulnerable backfield unit like a Wizard (looking at you Sayl) or buffing character (for example, a Free People’s General) and get rerolls against him with the quite good Gryph-Charger might be powerful. A Lord-Aquilor kitted out with Aethereal Stalker, Zealous Crusader, and an offensive Artifact can be a real threat to backfield Heroes.

Wind Runner is also going to be a very solid pick for both story purposes and tactical reasons. It can represent a Gryph-Charger who is attuned to the Aetheric Winds, but strategically it can give you more reliability towards zapping across the map to contest late game objectives or to get into locations where you’re needed. Mobility is just as important (if not more so) to the game as killing things, so having better, more reliable ways to traverse the map is powerful.

So there you go! We’ve got some really strong Heroes on mounts, and making them even better can only be good. And not only that, these options are great ways to give flavor and character to your force, really making them your own, to fit your playstyle and personality. I love how AoS manages to give you options that are both fluffy and tactically interesting, and we’ve got so much more in other Battletomes and ones that will come out in the future!

We’ve got some more AoS content coming up soon, but we always like to hear from you guys! Anything you want to learn more about? An army that you want to dissect and discuss? Or general strategies? Write down below in the comments! We’ll have some more Stormcast articles, but we love all the Alliances and factions!

If you want to pick up some Stormcast, or want to get another force to smash the Lightning Lads, remember that Frontline Gaming sells Games Workshop product at up to 25% off of retail, every day! Frontline Gaming will buy your used models for cash or store credit!

Posted on April 30, 2017 by Requizen in Age of Sigmar, Review, Tactics