You are here: Home › 40K › Newhammer and the Blood Angels – Weapon Profiles 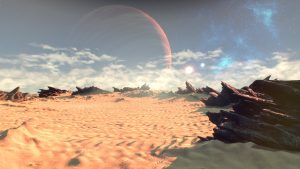 Hey guys its the Captain again, and I’m back for another chance to crack the code of Newhammer through my shiny, red lens. As many of you guys who listen to Forge the Narrative know, I’m a die-hard Blood Angels fanatic, so get ready to dive into a fresh set of theoryhammer with me as we explore the next juicy tease from the Warhammer Community guys. Keep in mind, much of this is opinion and wishful thinking.

Check Out Those Profile Pics…

The good-old boltgun is up again on center stage as GW teases the latest, hot pics for our eyeballs to feast upon. Today’s installment is all about weapons, and just like any good picture it leaves something to the imagination. There are, of course, several terms that are familiar to use from across the 40k edition multiverse, such as rapid fire and AP, but what we don’t know is what the 1 next to rapid fire means. Apparently even in the 41st millennium, mystery is still sexy. AP, of course, means a modifier to the target’s save. 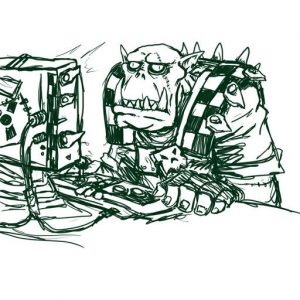 Great question, vile xenos! This is where things go a bit further into the realm of speculation than I normally would, however the biggest thing here that will make my Blood Angels happy is the flamer profile. 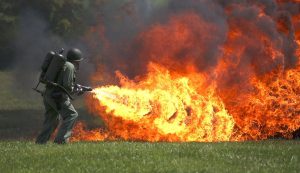 Flamers are going to make a bit comeback in 40k in general, since now you can hit a single model multiple times as maximum range with a single flamer. In theory, that means that the armies with the best flamers will have even more opportunity to take advantage of this profile. This will give Blood Angels a nice moment to shine, because we have some of the best and most ubiquitous access to Heavy Flamers among the Imperial Factions. I am already a big proponent of using Heavy Flamers on my tactical marines, and I’m happy to see that my weapon of choice  won’t really need to change all that much. Depending on how you can load out your other marines (like assault marines) we might be able to really take advantage of moving up the table and dropping hot promethium at speed. Hot? Promethium? Speed? Who better to do this than… 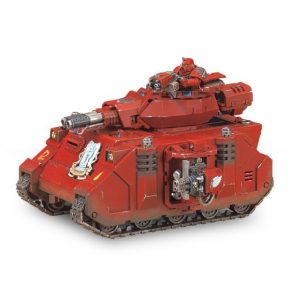 This guy! I named mine Trogdor…

When was the last time you can remember the Baal Predator actually doing anything with the Heavy Flamer sponsons? There’s no more shaken or stunned for vehicles now that they have a toughness, so now we could rush up the table with these guys and lay down a TON of pressure with literal FIREpower. Will this be better than heavy bolters or assault cannons? It’s hard to say at this point, but what we can say is that it doesn’t look like we can rule this out as an obvious bad choice anymore. Granted, a lot of this is assumption without context, but if GW really is trying to make every model useful, then this would be a top contender among models who really needs a boost.

One of the big things we still don’t know about (aside from 99% of all of the shooting weapon profiles) is how the melee weapons are looking. I bet they are saving this juicy tidbit for later, but I imagine that they will follow a lot of the same pattern. I’d love to see what the new stats are for the Blood Claws or Blood Fists on the dreadnoughts, but I can at least be happy with the knowledge that the flamers/frag cannons attached to those combat weapons will be doing some work for me on the table.

That’s all for now, folks! Stay tuned as I get my peepers on some more of the sneak peaks coming from GW. Until then, let me know what weapons you want to see the profiles of the most in the comments below, post up your guesses and we’ll see how closely they match up when they are all released officially!

← It’s The End Of 7th As We Know It And I Feel Fine…
Stormcast Eternals Battletome: Exceptional Steeds →

7 Responses to “Newhammer and the Blood Angels – Weapon Profiles”