Do you DIG Giant Robots? Do you look at 40k and think “The Dreadnoughts are SO COOL, but…” Then come inside from the rain my friend, I’ve found your favorite list builds in WarmaHordes!Check the Tactics Corner for more great articles!

Hey Guys, BigVik here with another Theme List review! This time we’re talking about BIG STOMPY ROBOT BUILDS, I don’t know about you but that’s why I started playing this game! The Theme lists we’ll be discussing today is Menoth’s Creator’s Wrath, and Khador’s Jaws of the Wolf! 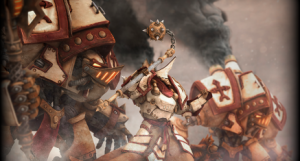 Fluff: The mighty sanctified machines of the Protectorate of Menoth march across Immoren in the name of the Creator of Man. This army is a wall of holy steel accompanied by the hymns of warpriests, striking down Menoth’s foes with righteous fury!

Benefits: for every 25 points of Warjacks and bttle engines in the army add 3 wracks, or another solo free of cost, solos and choir of Menoth units gain Reposition (3), and friendly modles/units can begin the game affected by the upkeep spells of the Warcaster. 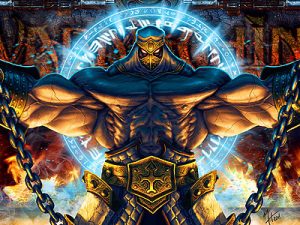 Typical builds: Sevy 2, Durant 2, and Anson Durst all really like this theme force, but we all know this theme force was secretly tailor made for my boy, Amon Ad Raza! He is SCARY in this theme force with his 2 upkeeps, and mobility getting cast every turn, Amon is among the most focus starved casters in a faction built around focus box casters.

A net list similar to what I think will continue to be a strong is:

Vigilant or Devout as needed

The Covenant of Menoth

Why it’s scary: This list is fast, hits extremely hard, and offers a large degree of protection for the very assassination prone Amon due to 2-3 shield guards and the book ensuring no stationary on his low armor frame. 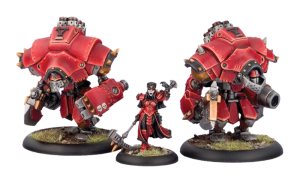 Next, Khador Jaws of the Wolf

Fluff: With the escalation of wars throughout Immoren Khador has began using  the deployment of Warjack heavy forces to eliminate hard targets. This force represents a wall of Warjacks with a contingent of scouts who venture ahead of the column of Khadoran steel, to ensure it reaches its target intact. Once fully engaged, the Warjacks grind the enemy down with superior strength and raw firepower. 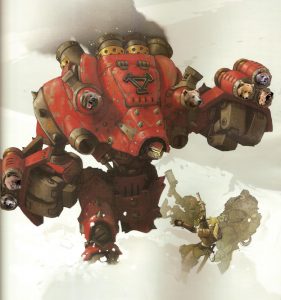 Benefits: For every 25 points of Warjacks in this army, add one command attachment or non-character solo to the army for free. Battle Mechanik units gain reposition (3”), enemy warrior models, Warjacks, and Warbeasts lose advance deployment. 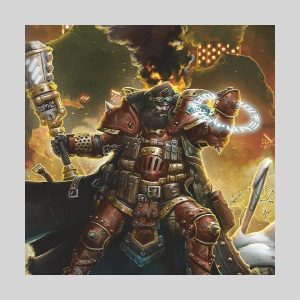 Typical builds: This theme force can be used by Harkevich to create fast moving cloud walls with kodiaks, the sorchas can create wonky assassination angles, Butcher 1 can run a jack wall that hits hard and has crazy focus efficiency, Karchev can run a wall of jacks that can kill the world on feat turn, and become a massive puzzle for your opponent to solve if they want to get to him.

But let’s look at the in vogue base build

Why They’re scary: Between this and the Winter Guard Command theme, you can create a very scary offensive skewing within your pairing, making either a very scary list chicken scenario for your opponent, or use this theme as your anvil, and the steel legion theme as your hammer. That’s the beauty of this theme, it can be complementary to either of the other themes, not to mention something like a Sorcha’s 11 list, where she has every utility solo ever.. 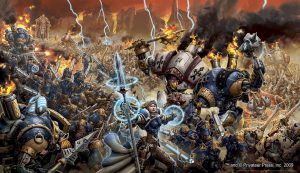 What I love about both of these theme lists is they are the fabled stompy giant robot army that everyone wanted when they first saw Warmachine, and they are actually very strong, and functional within a pairing. They do very different things, but exactly what their faction needs, the jack casters in Menoth need the ability to easily get their upkeeps out on the table. Khador has a problem with its jacks being slow and your opponent getting the drop on the scenario while you’re still running up to start the fight. Jaws of the wolf largely fixes this by taking advance deployment away from your opponent, solving much of this problem.

What does this mean? You’ll be seeing these theme forces a lot, like a lot a lot.

Well that’s it for this article, next time we’ll be looking at another faction review!

Posted on April 28, 2017 by BigVik in Tactics, Warmachine