The following comes from the Warhammer Community Page.

The Psychic phase for the new Warhammer 40,000 has changed a fair bit.

Previously, each of your psykers would generate warp charge for your pool. This worked pretty well in most games, but in very psyker-heavy armies, it often meant that some psykers sat around not doing a whole bunch, while one or two mega-psykers (we’re looking at you, Magnus – you big warp charge hog) had all the fun.

In the new system, the Psychic phase has been re-worked from the ground up.

Each time you pick a psyker, you can cast as many spells as their datasheet states (which would previously be the same as their Mastery Level) and there’s a simpler, two-dice mechanic for casting, you just need to beat the warp charge value. The more potent the power, the harder it will be to cast. 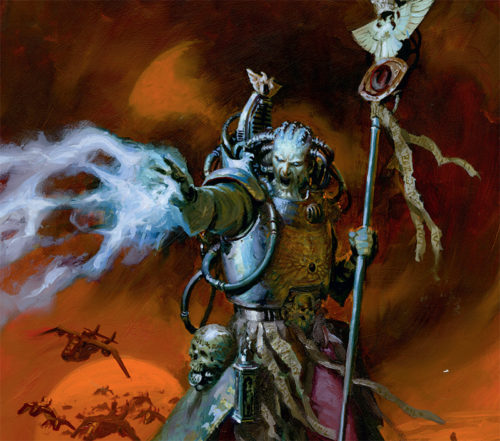 Enemy psykers will then have a chance to block these powers if they are within 24″, and again, the mastery of the psyker will dictate how often they can block a power each turn.

The new system is much more scalable – meaning that the phase works well at any size of game, with any number of psykers running around.

Perils of the Warp is still there of course. It wouldn’t be Warhammer 40,000 without the chance of accidentally having your mind eaten by a Daemon and your soul sucked into the psychic oblivion of the Warp while your body exploded in a multifaceted explosion of etheric ichor…

Every faction will have its own psychic lore with a range of thematic powers. In addition, every psyker knows the Smite power: 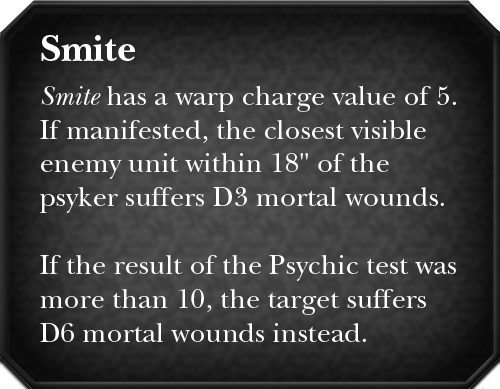 Mortal Wounds are a new mechanic too – these cannot be saved by any means and punch straight through thick armour and even invulnerable saves! Ouch.

That’s the basics on the Psychic phase.

We’ll be back tomorrow with news on one of the updated war zones from the new Warhammer 40,000, and on Sunday, we’ll be looking at the Shooting phase.