Greatness for Greenskins? Wishlisting for Orks in 40k

You are here: Home › 40K › Greatness for Greenskins? Wishlisting for Orks in 40k 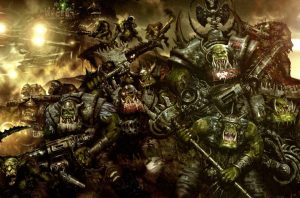 Hi everyone, Michael here with my hopes and dreams for Orks when Newhammer hits the shelves. For more reviews, analyses and battle reports, check out the Tactics Corner.

The rumour mills are turning and the hype train is full speed ahead. GW are doing a great job of building excitement for the next phase of 40k, releasing snippets of information and answering some of our burning questions. It is an exciting time for 40k players. With speculation rampant at the moment, I thought that I would join in and say what I would like to see for the future of Orks in 40k.

All the thoughts below are entirely my own opinion based on what I would like to see and what has been released so far. None of this comes from inside information and most of it will probably turn out to be wrong or wish-listing. But it is fun to speculate! 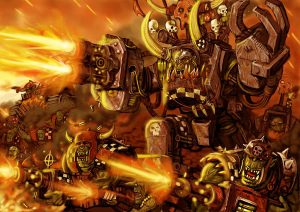 To me, Orks are one of the great races of 40k. They are a really fun army to use and offer perhaps the greatest scope for conversions and kit-bashing of any race in the Warhammer 40,000 universe. Seventh edition hit the Orks as hard as a Garguantuan Squiggoth. As the first codex out of the gate in 7th edition, they are generally perceived as one of the weakest codexes available at the moment. Some of this was down to new special rules in the codex, a re-organisation of the codex units and the general difficulty of getting into assault in 7th edition if you were not an invisible deathstar. I have been playing Orks since 3rd edition 40k. They are one of my favourite armies to use and are a joy to build and paint. Here are some of my thoughts on what could happen for the Greenskins going forward. 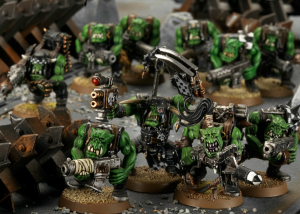 One of the most lamented changes to the 7th edition codex was the new rules for the Mob Rule. Previously, this rule made large mobs of Ork Boyz Fearless, helping your units to not flee as they advanced across the board to try and get into assault. The rule changed to being a table that you would roll on if you failed a morale check. The results were either fleeing (unless you were in combat), taking additional casualties (at a higher strength than you could do to your opponent) or possibly damaging any characters in the mob. Either way, this was not much of an advantage for the Boyz mobs and would often be a penalty rather than a bonus. It worked reasonable well for large mobs of Orks, but was often absolutely crippling for smaller units, such as Trukk Boyz mobs, or elite units such as Lootas, Burna Boyz, etc.

With the morale system seemingly being completely re-worked, the Mob Rule needs some updating too. I would like to see this going back to being a bonus for the mobs, rather than a penalty. It should still reward large mobs of Boyz (that is what Orks do best after all!), but should not be so detrimental for smaller units.

If the morale system was to work similar to Age of Sigmar’s battleshock morale, there are a few ways this could be implemented. One could be allowing Orks to ignore casualties for the purposes of morale if the mob is above 10 models. With a Ld of 7 or 8, there would still be a good chance of losing a few additional models upon a morale check, but the test would not be so crippling if you have already taken a number of casualties. Alternatively, they could use a system similar to Skaven for Warhammer Fantasy, where your Leadership increases, the more Orks you have in a mob. For example, you could gain +1 Leadership for each multiple of 5 or 10 Orks in the mob.

Some sort of morale boost for Orks in larger mobs would be perfectly fitting with the fluff and would give them a nice boost to get into combat. Speaking of which…… 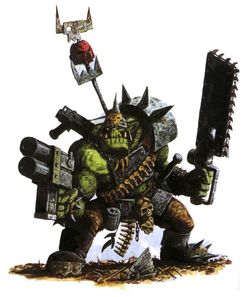 Based on the rumours so far, combat seems to be getting a good shake up. Charging units striking first is a great step forward in the right direction. The Orks’ low initiative of 2 meant that much of the time if you actually managed to make it to combat, you were getting beat up before you even had a chance to strike most of the time.

Allowing your mobs to strike first when they charge is a great boost. This would mean that carefully timed assaults could be extremely powerful for the Orks. It would also make when to call a Waaagh critical. If the Waaagh followed a similar mechanic, allowing you to run and then assault or giving you a boost to your movement in the turn it is called, then this would help the Orks to get a charge in against faster opponents for that critical turn of the game.

With the charger getting to strike first, I can see the +1 attack bonus for charging units disappearing from the game. I think this would be a fair trade off for the Orks. You would not need such a high volume of attacks if you are not losing models before they get to attack on the charge.

Also, I can see rules such as furious charge being removed or severely restricted. If so, it would be nice for Orks to go up to S4 or to still get a strength bonus on the turn that they charge. 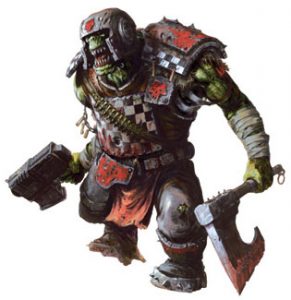 The Choppas rule from the 3rd edition Ork codex was great. This rule basically limited your opponent’s armour save to no better than 4+ against a unit armed with Choppas. This made units of Space Marines and Terminators fearful of large mobs of Orks.

Being able to reduce the armour save of heavy infantry would make large mobs of Orks a much more fearful prospect that they currently are in the game. 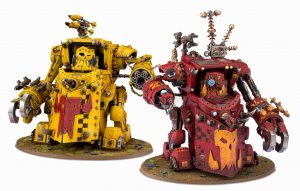 By all accounts, the change of vehicles to Wounds and Toughness should be great for the Orks. I can see the immobilisation of vehicles being completely removed from the game. Rather, I expect them to undergo the gradual decrease in abilities that monsters undergo in Age of Sigmar.

No longer having your Walkers taken out by a lucky Lascannon shot, or worse, absolutely crippled by Grav fire should be a big boost for Deff Dreads and Killa Kans. This should hopefully allow Ork walkers to get into combat and crush the puny foes arrayed against them.

This also gives me high hopes for the much maligned Gorkanaut and Morkanaut. Could these semi-titans of the Ork army be due for a big comeback? 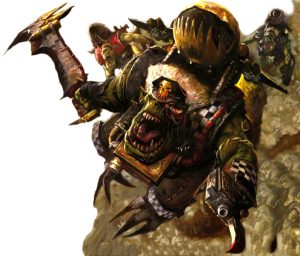 It would be great to see some of these characters return to being unit upgrades for your force, rather than dedicated HQ slots. Who know, perhaps we may be getting rid of such outdated notions in the future and can build an Ork force with tons of great characters. 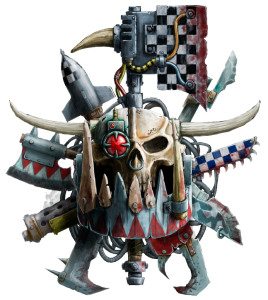 The demise of the AP system means that we might actually get to occasionally take armour saves! Based on the recently disclosed weapons profiles, Bolters and the like will no longer completely remove armour saves from many units. I imagine that our armour saves will probably stay at 6+, but that means it may come in useful a few times, as opposed to now where you don’t get them against anything but Lasguns. It’s better than nothing, right?

Also, the removal of the AP system should be a boost for the heavily-armoured Meganobz. Based on the released Terminator profile, we may also see a wound increase for them, as well as getting an armour save from heavier weapons such as Lascannons or grav cannons.

I’m sure there are a ton of other things that could be done to add to the Ork army in Newhammer, but these are just a few of my own thoughts that spring to mind. Is there anything you would like to see added to the Orks to make them great again?

16 Responses to “Greatness for Greenskins? Wishlisting for Orks in 40k”