You are here: Home › 40K › Tactics › Newhammer and the Blood Angels – Unit Profiles

Captain Morgan here again, and I’m bursting at the seams thinking about what is going on with the changes coming to Warhammer 40k. As many of you guys who listen to Forge the Narrative know, I’m a die-hard Blood Angels fanatic. We of the IXth legion are familiar with hard times in 40k, back in the days of the PDF White Dwarf Rules Heresy during 3rd/4th Edition, as well as that long period from 2010-2014 that spanned 5th-7th Editions, but I and many of my other battle-brothers across the segmentum have never lost the faith. 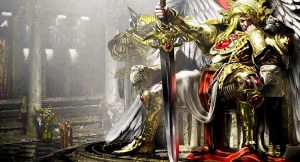 Yeah, we’ve been waiting for a while though…

Now with the upcoming release of Newhammer, I have reason to hope that things might just get better for us, and so with this article (and the ones to follow) I will be focusing on how each new change could impact the way the Blood Angels players play their games. All of this is just theory and doesn’t reflect anything we know for sure, but speculation is half the fun! With that disclaimer in mind, let’s get into the juicy stuff!

So, with the article on the Warhammer Community page about unit profiles, we already know a couple of cool things about the new edition. First, the to-hit cap of 3+ is gone (thanks to Guilliman’s profile), which means our beefy characters that should hit a truck can now do that bettter. Models will now have more wounds than they did before (terminators specifically, but also characters). Models now have a set movement value, which is based on each individual model’s capabilities. You know who’s unit profile I want to see the most? 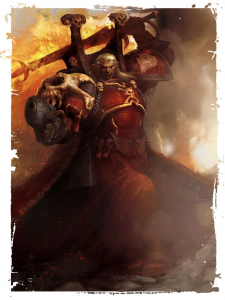 Mephiston was my first character model. He’s the reason that I have 14+ painted librarian models in my collection (counting the 3 different Mephistons I’ve had over the years…), but he’s also a great candidate to look at a lot of changes at once. He’s been through a lot in his lifetime, bouncing back and forth between 3 and 5 wounds, and he had pretty much the original Primarch statline in 5th Edition (here is an old article on BOLS that was asking if he should even be allowed in competitive play). All of these changes make me wonder exactly how beastly Mephiston is going to be in the new edition. I imagine he’s probably back up to 5 or 6 wounds. I can see him having a pretty high strength (naturally he was S5 in 7th but since 5th he’s had a way of getting up to S10). With the changes to AP, that means that Mephiston with his 2+ save will finally get a save against high-AP weapons like plasma or lascannons, where he has often struggled for lack of an invulnerable save. Just getting to roll a D6 to make a save against a tough weapon will be amazing. He has been fleet for years, and before the dawn of bikes he was one of the most mobile units thanks to his ability to cast a jump power. 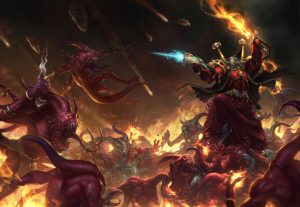 This would go faster if you all just got in line…

I have many pleasant memories of hopping around with him with the old Wings of Sanguinius, running with fleet, and charging into his target swinging like a beast back in the old days. With changes to psychic powers that we don’t know yet, it’s hard to say what exactly he will turn out to be, but I can tell you that I am excited to see his profile and get him back on the table in more games killing stuff where he belongs.

There are a few other characters who definitely need a bit of help. Astorath, Lemartes, and Gabriel Seth have long been down in the doldrums, and they now have a chance to come back up into the limelight and shine a bit. Poor, poor Tycho definitely needs a makeover… 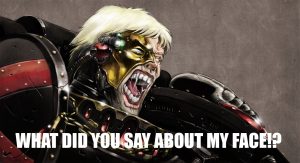 OMG I’M SORRY I WAS TALKING ABOUT YOUR RULES NOT YOUR FACE!!!

With Dreadnoughts and vehicles getting new profiles as well, this opens up new possibilities for some of the other units as well. The Blood Angels pretty much invented the Stormraven, but with very little info on flyers I hesitate to speculate on them too much. Thanks to the lucius drop pod and the chapter ancients formation, Furioso Dreads and Librarian Dreads made a semi-meta-busting comeback, and I can only imagine that those units now lacking armor values and gaining saves can only get better. Blood Angels have some of the best Dreads out there, and everyone wants to see the big stompy robots come out to play again. Let’s not forget the assault marines, but I think I’ll save their focus for the movement section. Rest assured, I am anxious for any reason to get them back on the table. 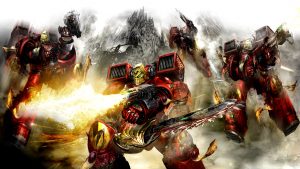 That’s it for now, but stay tuned as I cover more of the topics as they come out on the Warhammer Community page. Be sure to check out Forge the Narrative as we discuss what’s going on in the 40k multiverse as well. Which Blood Angels units are you guys the most excited for!?

10 Responses to “Newhammer and the Blood Angels – Unit Profiles”