The following was taken from the Warhammer Community site.

Today is a big one guys – we’re talking about how profiles are going to work in the new edition.

The profiles for the current version of the game have been a part of Warhammer 40,000 for over a decade now, and for the most part they worked pretty well, though there were always a few anomalies or things that didn’t work quite as you’d expect.

In the new edition, the rules team were keen to have the profile work harder – to better distinguish between the different units so that, for example, Eldar will run faster than Guardsmen, and Hormagaunts run faster than both. 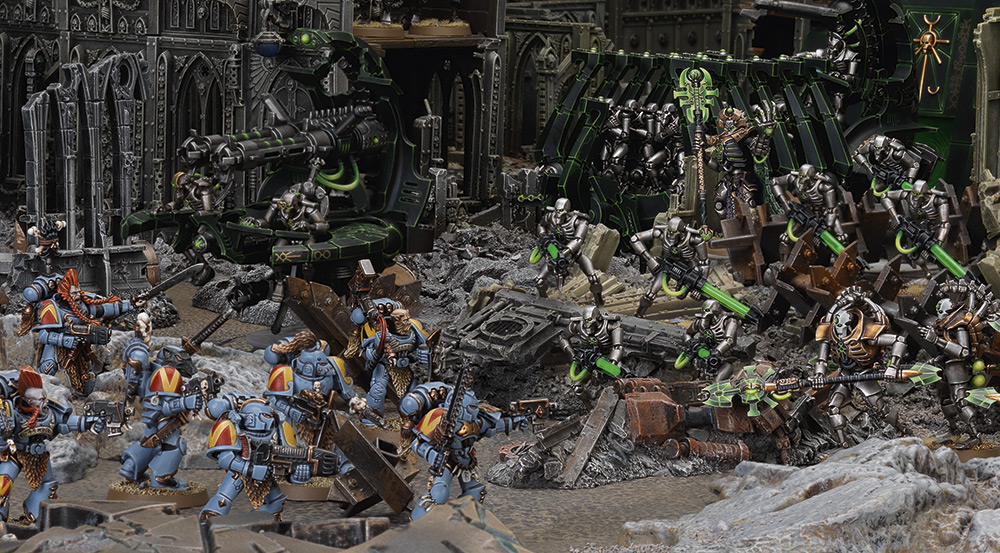 One big change is vehicles. These now use the same profile system as everyone else. As you’ll see though, their stat lines are much above what you might expect from a standard infantry trooper. Wounds, for example, are not capped at 10, so don’t be surprised if you see larger vehicles like Land Raiders and Imperial Knights with dozens of wounds.

This means that there is no differentiation between monsters and vehicles, so you now have a standard system to compare between, for example, a Carnifex vs a Dreadnought.  Speaking of Carnifexes, large monsters like them also have a lot more wounds now. There are also no Super Heavy Vehicle rules, as such. With the stats going above 10, the system is now an increasing scale, which means models that previously fell just shy of super-heavy status, the Gorkanaut for example, can now punch at the appropriate weight, and become much more survivable.

So, without further ado – let’s look at some stats!

Here, we have 4 examples from the most iconic Warhammer 40,000 army  – the Space Marines.

You’ll see that the stats are still recognisably Warhammer 40,000, but with just a few changes. We’ve gained a Movement stat in exchange for a Initiative stat. With charging units now striking first, movement and co-ordination of your assault army becomes a big factor. You can also see that WS and BS are now standard rolls (Ballistic Skill sort of always was), though you can expect modifiers to both of these stats from in-game effects.

Strength and Toughness are still with us, and still use an opposing value principle (so much higher Strength will still wound on 2+, low Strength will wound on a 6+), and these aren’t capped at 10 any more either. Wounds is a big one. Expect a lot of models to get more of these. As you can see here, the Terminator has twice what he has now, and Guilliman has more too.

Don’t worry though – stuff still dies quickly, with powerful weapons dishing out multiple damage with each hit – but you will, as always, need to shoot the right gun at the right target to get the best effects.

So there you have it guys.

Lots of new stuff in there.

Take a day to digest all that, and we’ll be back tomorrow with some info on the weapon stat lines you’ll be using in the new edition.

Exciting stuff! What do you all think? -Reecius