Hello fans of Frontline Gaming, SaltyJohn, and TFGRadio today I’m bringing you the Death Guard from Traitor Legions, the Vectorium, in all it’s filthy, resilient glory! For more reviews, bat reps, tactics discussions, and analysis check out the Tactics Corner!

The XIV Legion of the Adeptus Astartes were always known as the most resilient of the already resilient Space Marines created by the Emperor of Mankind. With an increased resistance to poisons, toxic environments, and other contagions that would fell members of the other Legions the Death Guard would often march implacably into the most dangerous environments of the Great Crusade, their Primarch Mortarion leading the way sweeping the enemies of the Emperor away with his huge scythe. In the end Horus turned Mortarion to his side and the Death Guard became imbued with the rotting powers of Nurgle. Immune to fear, and pain the already relentless Death Guard became nigh unstoppable agents of Chaos. 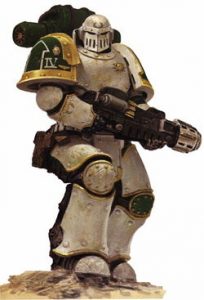 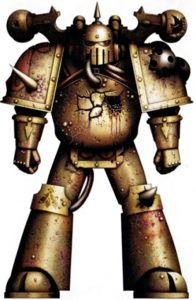 The best part about this detachment is the overall boost in resiliency to the units that are part of it, particularly those units that have Veterans of the Long War. You can easily build a list with army wide Toughness 5 or better, that has Feel No Pain (re-rolling 1s), Stealth from over 18in away, and Relentless. You’re probably going to have a lot of Objective Secured units as well because you’re taking a Warband. You just are. That is really good. Think about it like a Space Marine Gladius but with units that are more difficult to kill. I know T5 and 5+ FNP doesn’t sound that great at first but when you set them down on the table and start to see how it all works, it can be brutal.

In these articles I always try to focus on the best way to use the unit, formation, detachment in question. With the Death Guard Vectorium there are several great ways to run it, all centered around a Chaos Warband. The Warband is a central component to any of the detachments found in Traitor Legions. They have units included as “must takes” that are all benefiting greatly from the Chaos Renaissance of the Traitor Legions book. Chaos Lord, Chosen, Bikers, Chaos Space Marines, and Havocs are the big winners. For more on just how read the hyperlinked articles, each one includes notes on just how they benefit from being run as a Death Guard Vectorium.

The increased all around resilience of the Vectorium can’t be over stated. The Havocs alone, with T5, Relentless, Objective Secured, Feel No Pain, Fearless, and Stealth (most of the time) make for a wonderful backfield camping unit that requires real dedication from your opponent to move off an objective. You have to kill them all to get them off an objective because they won’t run, and can take a lot of shooting to kill. Resiliency aside what exactly can you do with this formation? The standard way to run it is to go with a small Death Star. Usually a bike star or Spawn Star centered around a Lord on Bike with 1 or 2 Sorcerers on Bikes. The great thing about the Warband is you can take on Sorcerer in it, and he’s also Objective Secured. You probably already have a decent idea for how the Vectorium with a Warband would work if you read the Hyperlinked articles so let’s look at a few ways to load out the Vectorium.

My personal favorite is an all foot slogging list. 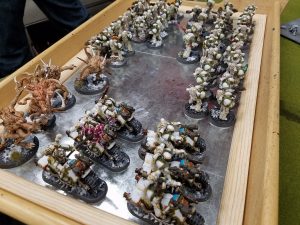 This is my current Death Guard Army in pre-heresy colors. It’s the list below.

Generally speaking the list is straight forward. With nothing under T5 and the added resiliency of all the FNP and Stealth the list is hard to table; the big 10 man squads are also nice for that very reason. Remember that everything is Relentless so you never have to worry about choosing to move or fire, or fire Rapid fire or assault. One of the best parts of the Death Guard is the ability to fire all your weapons in a squad, Rapid Fire/Heavy etc and still charge. I really like the unit of terminators T5, FNP, and Stealth gives them that little extra layer of protection they need. They’re great to deep strike in the backfield and draw the enemies fire for 2 turns or so. Another great list uses more transports and less Terminators.

This list provides more maneuverability. Generally here I would roll on the Strategic Warlord Traits to try and get outflank for 3 units and then Outflank the Chosen, 1 CSM Squad, and the Bikes. Again everything is super resilient compared to regular MEQs. The last list I really like uses Typhus.

This list is interesting on a few levels. Typhus makes the Cultists Zombies, which is good. The Land Raider is also going to throw a few people for a loop as nobody uses them much anymore. Obviously some lists still have what it takes to rip one open turn one but not all and the unit inside is hard to handle. With 74 models that are all more difficult to kill than usual and a lot of Objective Secured it is potentially annoying list.

The best thing about the Death Guard Vectorium, and really all the new lists available from the Traitor Legions book is the wealth of flavorful options for Chaos players. You can build all types of lists with the book and the various detachments and formations. Below you’ll find several Battle Reports I did with my Death Guard Vectorium lists, enjoy!