Hey Hey everyone, Danny from TFG Radio to go over not one but two different bugs today that bring the boom to the biomass, the Biovore and Spore Mine Cluster.  As always, go ahead and saunter your sexy self over to Frontline’s Tactics Corner for more awesome articles. 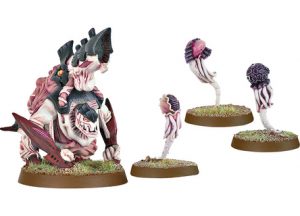 The Biovore is a light artillery piece that spells disaster for poorly armored infantry, and Spore Mines are living ammunition that can catch a lot of people off guard. 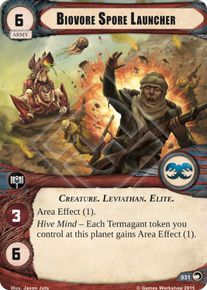 If purchased as a Fast Attack choice, you can add up to 3 more for a unit of 6.

Ok, so there is not a lot going on here for either of these units in terms of customization and upgrades.  There really doesn’t have to be though as this a focused unit with one job, and they do the job well.  The Spore Mine Launcher is one of the longest ranged weapons that Tyranids have, and 48 inches is plenty of table coverage, even for a unit that wants to hide in your own deployment zone.  S4 isn’t too sexy, but with a Large Blast and the ability to have 3 templates, you can really start to score so many hits that the wounds become inevitable.  AP 4 also means light infantry like Scouts, Drones, and most Eldar infantry are going to lose their armor save, and with Barrage, it is quite likely they won’t get a cover save either. That’s real good.    The extra bonus is that if you miss entirely, you still have the chance to cause some pain as you can instead place a unit of D3 Spore Mines (who can charge that turn).

Spore Mine Clusters themselves have no wargear or upgrades because quite literally, their job is to die.  We’ll get into that more quite soon. 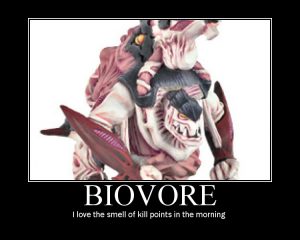 Deep Strike – You know it and love it.

Floating Death – Only move 3 in the movement phase, halve runs and charges. Spore mines ignore difficult (but not dangerous) terrain checks.  In close combat, at initiative 10, the spore mine detonates. Place a large blast over one of the Spore mines. Usual rules for templates. Each model hit suffers a S4 plus 1 for every other spore mine in the cluster, AP4 hit.  These hits ignore cover.  Remove the Spore Mines after.

Living Bomb – Spore Mines are non-scoring, non-denial units. They do not award Victory Points when killed and their explosions in close combat do not count for assault results.

So the Biovore doesn’t have much in the way of special rules, and IB Hunt is not intensely terrible as far as IB is concerned, but it does suck when you want them to shoot at a unit of Scouts camping an objective rather than a unit they cannot really hurt that is closer.  You will likely never transport Biovores as that seems excessive, particularly since Tyrannocytes have a capacity of 20, but hey, if you really want to put Biovores into a far corner of the table, you could.

The Spore Mines are real winners and losers here of the special rules.  You can take Spore Mines independently of a Biovore, and they are dirt cheap for up to 6 although really, do you want to pay for what is essentially a one-shot weapon that dies pretty easily to any ranged attack?  The big thing is that Spore Mines can do up to a S9 large blast AP4 ignores cover attack, and if you happen to have an enemy unit locked in place already, their limited speed isn’t too much of an issue.  Floating Death is excellent for wiping out fast, fragile units like Harlequins, and if you can get the strength high enough, you can even start to Instant Death some characters.  That’s hilarity.

So what do with a Biovore and friends? Well, the answer is pretty cut and dry.  You put them someplace safe and you drop bombs like you have words to someone’s mom. A unit of 3 Biovores is just a bit under a dollar twenty-five, and for that you get 3 large blast barrage weapons on 3 T4, 3W models that also pack assault weapons, so you can actually move about the battlefield as necessary.  Barrage is such a good rule as it allows the Biovores to sit completely out of Line of Sight and still rain down some murder, so this radically ups their survivability while also mitigating your opponent’s.  As Renegade artillery spam has shown, being able to lay out the templates is not too bad at all.  Yes, you are at the mercy of the scatter dice, but with Spore Burst, even if you miss, you can deposit a few Spore Mines that can still be a threat in the assault phase.

A solid formation to consider with Biovores is the Living Artillery Node.  A full brood of Biovores and Exocrine is a decent amount of firepower, and while you have to take the tax of Warriors with one bio-cannon, gaining pinning to all ranged attacks and reroll scatter for all units within 12 of the Warriors is pretty good.  This definitely makes the Biovores far more consistent, and anyone who uses a Wyvern can tell you how much fun twin-linked Barrage weapons can be.  While not the cheapest formation, if you want to essentially create a bunker of shooting doom in your deployment zone, this is the way to go.

If you don’t want to worry about all that formation nonsense, at 1850, you can take 9 Biovores in a standard 5 Flyrant tournament frame (5 Flyrants + 5 Mucolid Spores) with points left over.  This isn’t necessarily a terrible idea as it gives you some ground control on your side of the table, and you get to add far more volume of fire to the table.

Spore Mines as a solo choice can be a quick way to fill a gap in points, and if set up properly with little bugs locking a unit down, you can get a quick S6 AP4 ignores cover blast into a unit at I10.  Really, you want to hit at least S8 as this will kill a lot of T4 characters or put a hull point on most vehicles.

There are downsides of course because well, Tyranids.  Spore Mines on their own are just giving up kill points (the rule says Victory Points), so depending on format, they can just be easy meat since they die to lasguns.  Biovores are a bit more durable with T4 and 3 Wounds, but they only have a 4+ armor save, so any real attention will kill them pretty quick.   This is especially true in melee as they are not going to win any fights except against Blue Horrors.    Biovores also really need Synapse control as they are only LD6, so if they do need to take an IB test, they are more likely to fail than succeed.  This means you need a baby sitter, and while the Living Artillery Node gives that to you in the Warrior-Tax, there are better Synapse batteries like a lone Zoanthrope.

Also, Tyranids are typically best played as mobile army, so having a unit or two that really wants to mostly stay in one prime location and fire is a bit counter-productive to the strengths of the army most times.  Biovores really want to sit in a ruin behind a wall and just drop shots, but if your Synapse is mobile, you could leave them behind, and they are generally undefended against any backfield threats that might come in and sweep them up.   Going with the Flyrant build, this is a weakness as it essentially focuses any unit not able to really handle the Flyrants to go after your Biovores.  If you want to build more of a gun-line army, Tyranids just aren’t that great at it, and while Biovores are solid choices for their points, they don’t synergize as well with our strongest builds.

Are Biovores competitive? I think yes, actually. But are they optimal? Probably not.  In general, a few Biovores are not a bad thing to have in your collection, and there are few Tyranid joys like missing with a biovore only to drop 3 Spore Mines onto the table that charge into something for a S6 hit. Thanks as always for putting up with me, and as always, go check out TFG Radio.