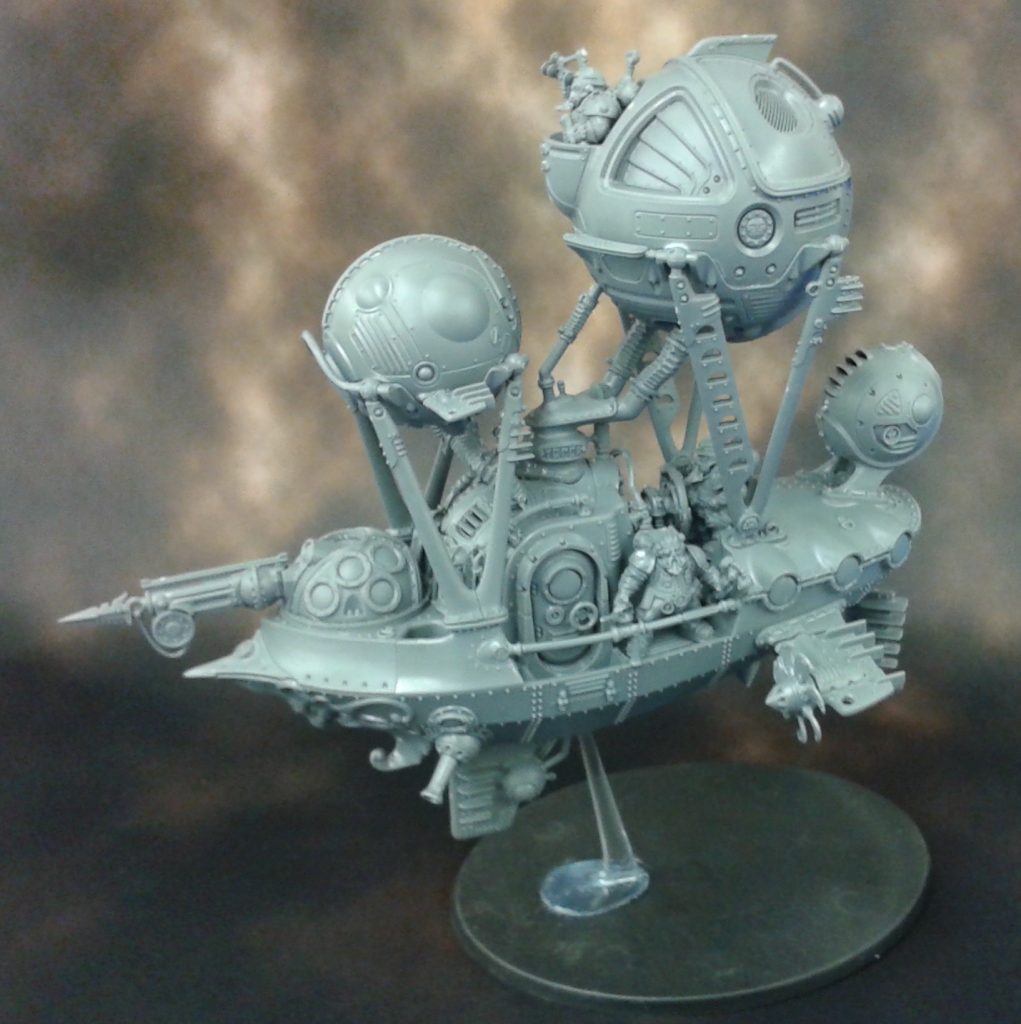 Howdy all, Reecius here with an overview of the new Kharadron Overlords release for Age of Sigmar. Check the Tactics Corner for more great reviews!

Hoooo nelly, do I have a hot little item in my greedy clutches: the new Kharadron Overlords Battletome! And here comes a scorchin’ review, just for you my dear readers. Part 2 covering battalions and tactics will follow, soon!

This faction has a lot going for it! Gorgeous models, a cool backstory, and unique play-style with their Air-ships (Skyvessels) which can act as transports (similar to 40k) and the ability to customize their army wide special rules–which is awesome. I honestly cannot tell how good they will be on the table as they have some interesting rules but nothing that jumps out as me as super powerful off the cuff. However, due to the interesting interactions of their speed and firepower, they may play very well on the table. 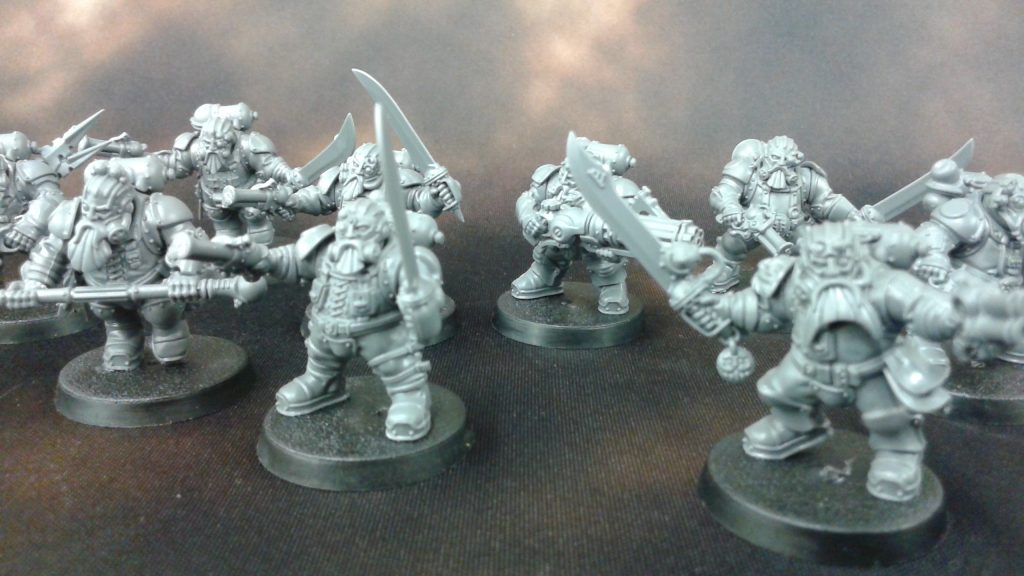 As stated, the models are so dang cool. I seriously love them. The basic unit, the Arkanaut Company, is just bad ass. We got some early to review and I love them. They really capture the feel of steampunk Duardin sky pirates. I didn’t know what that looked like before as I never gave it much though, lol, but upon seeing them you know exactly what they are. 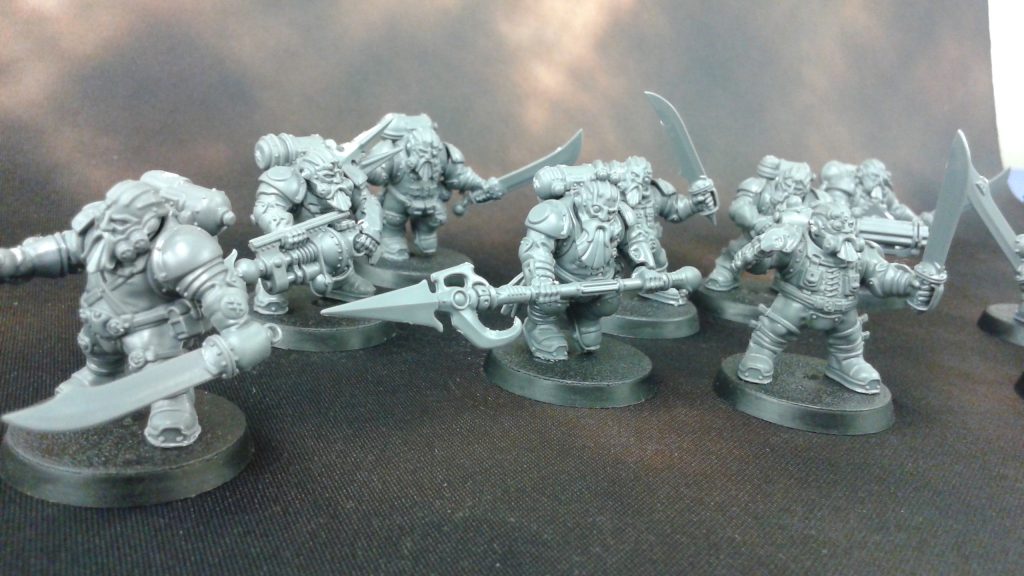 The unit itself is pretty middling off of the cuff in terms of the majority of their rules. Slow, low save (5+), mediocre hit and wound rolls (4+ on both), but lots of attacks (2 pistol shots at 12″ and sword attack in melee). That volume of attacks is actually quite good and what makes my ears perk up. 3 attacks per model, 2 of which are shooting attacks, is solid. These guys can pack a sting if you buff them up with some support units. They also have a plethora of special options such as melee weapons (Skypike) and additional shooting weapons that give you lots of shots (Aethermatic Volley Gun) with low accuracy, or a single shot with more of a punch (Light Skyhook). If you were to take 3 of these weapons in a unit you could either sport 18 shots with combined Volley Guns, or 3 fairly nasty shots with the Skyhooks, which is how I would roll with them, myself.

Additionally, the entire unit gets +1 to hit if they put all of their attacks on a Hero or Monster. Not bad. Not bad at all. Fairly vanilla stats, but they can pack in a lot of firepower for a basic Battleline unit. Sitting at 120 points, you get a lot for those points. 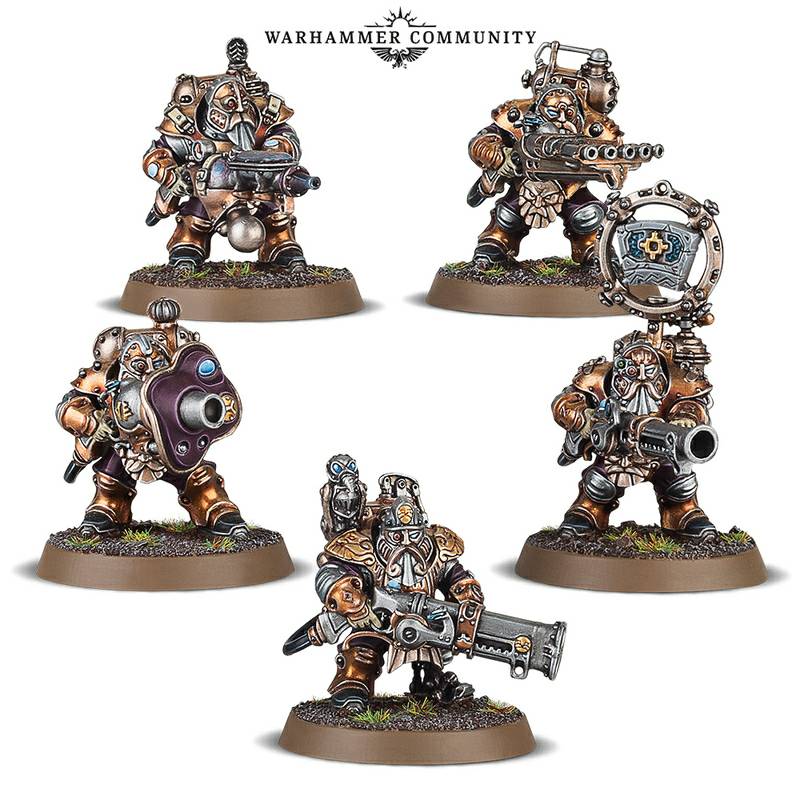 These swarthy little buggers have me all hot and bothered! They, like the Arkanaut Company, are relatively fragile having only 1 wound and a 4+ save, but they pack an almighty wallop in the shooting phase! Each of them can bring one of 5 special guns, each of which is very good. They vary in range from 9″ to 36″ (what?!, lol) and 3 of them are rend -1, one is rend -2, the final–the 36″ mortar–has no rend bus is D3 damage per shot. Basically, they’re packing some serious heat.

Additionally, they can reroll failed morale checks with their banner, and units that charge them take a Mortal Wound on a 2+ thanks to their nifty robo-bird companion. Lastly, when chosen to fight in the combat phase, they can simply say “no thank you, sir” and move away from combat! Not bad. Not bad, at all…again! As they’re so fragile and expensive (20pts a pop), that helps out a ton to keep them alive. 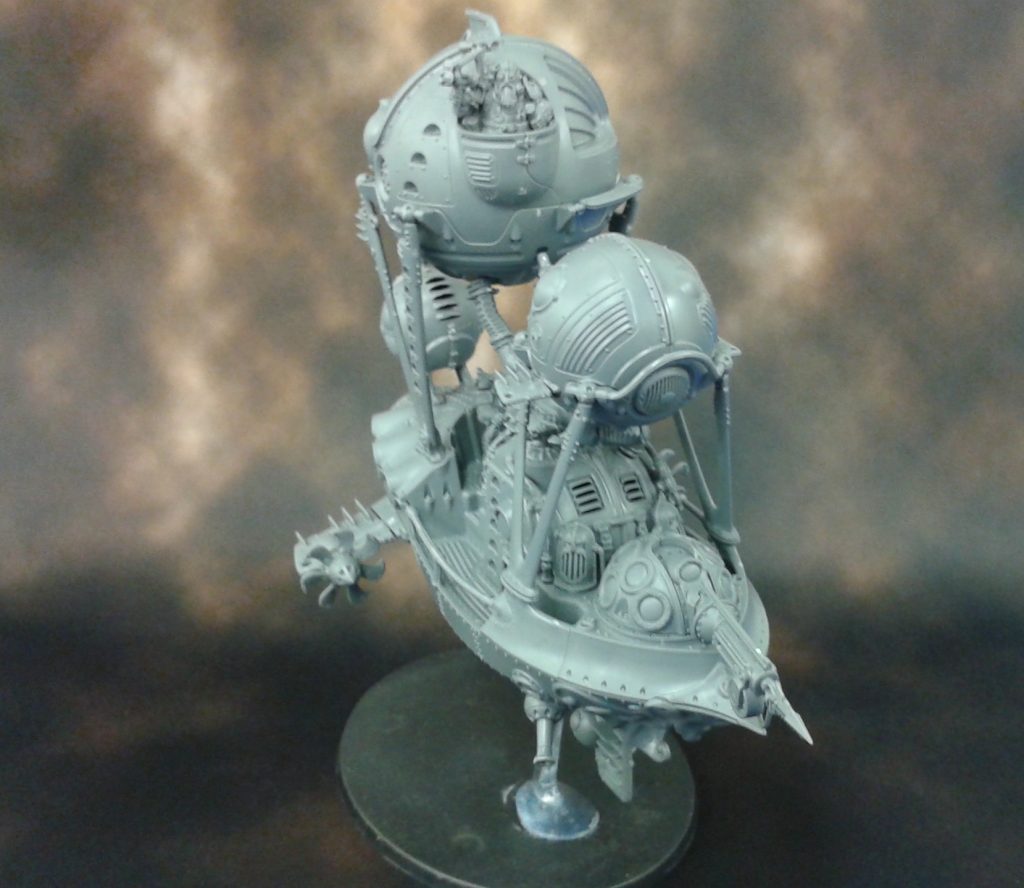 The really iconic units in the book, the Arkanaut Ironclad, the Arkanaut Frigate and the Grundstok Gunhaulers are very interesting models. They range from 440 to 220pts, so not cheap, but the Frigate and Ironclad can carry units which is unique in AoS. The Ironclad can carry up to 25 models, but slows down 1″ for every model over 20 that it carries. The Frigate can carry 15, but with the same slowing down over 10 models. The Gunhauler is strictly a gunboat as its name would suggest, but can absorb wounds for the bigger ships which is pretty awesome as it has a non-degrading profile. Also, interestingly, the ships have fairly flimsy armor. The Ironclad has a 4+ while the Frigate and Gunhauler only have a 5+ which I thought was a strange design choice, although both units do heal a wound every hero phase on a 4+.

As for firepower, all of the ships are not packing any super serious heat for the points, but do have tons of extra goodies. I think what you’re paying for is their speed and transport ability which is pretty cool. 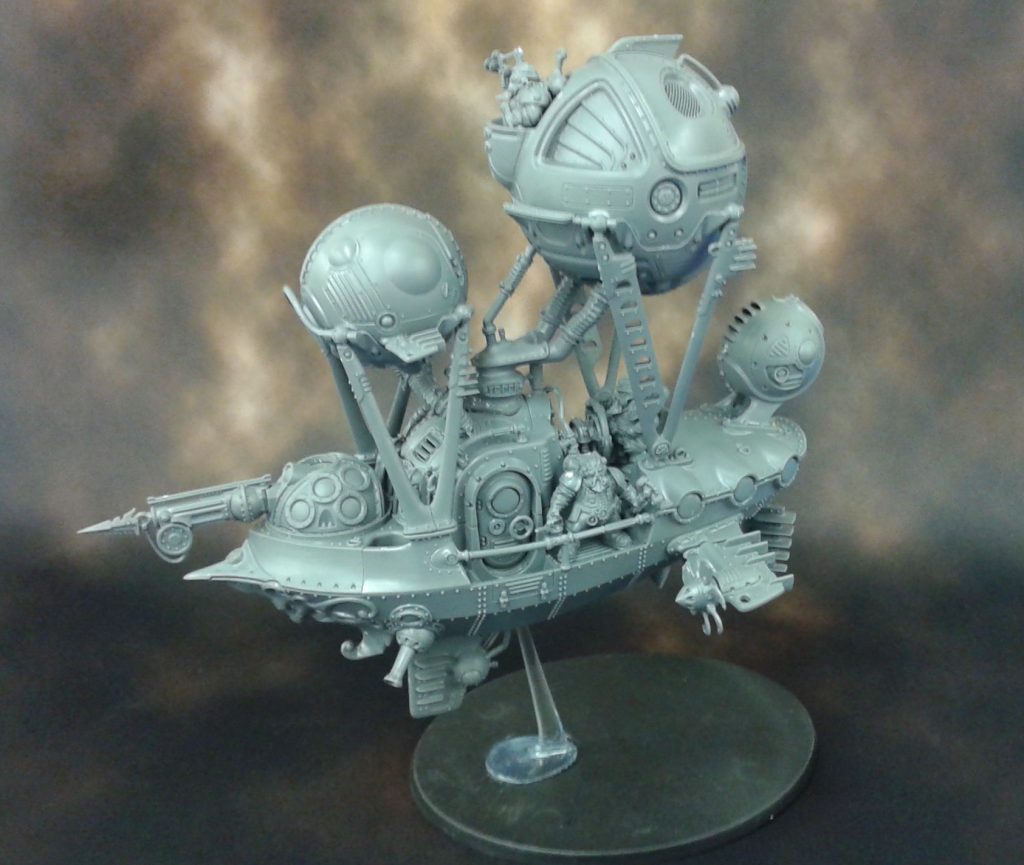 The Ironclad sports 8 Carbine shots (3+ to hit, 4+ to wound, rend -1 and 1 damage) and Torpedoes which have 4 shots, hit on a 4+, wound on a 3+, rend -1 and D3 damage, but both degrade in shots as the Ironclad gets wounded. All of the Skyvessels can sport a Cannon which seems most appealing to me (hits on a 4+, wounds on a 2+, rend -2, D6 damage) but you can also opt for a Skyhook which does less damage but can move the ship if it hurts its target.

Lastly they all have a variety of bombs which typically trigger when they are charged by enemy units, dealing damage (often mortal wounds) to them or slowing them down in combat. 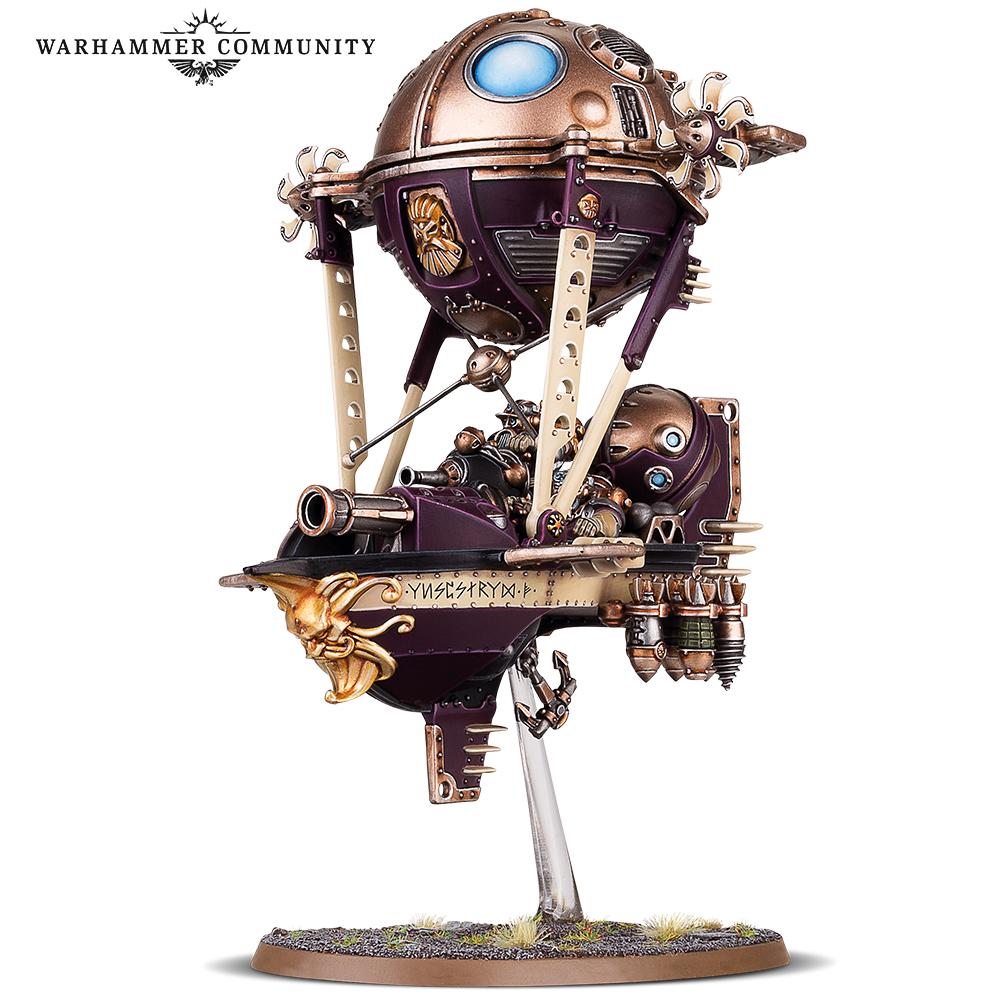 They all have some cool special rules, too. The Ironclad can issue orders that impact all visible Skyvessels, allowing them to reroll 1’s to hit, increase their range or number of Carbine shots, etc. The Frigate can reroll hit rolls of 1 for itself and the Gunhauler has the aforementioned ability to block shots on the other ships.

In all, these fell like they don’t hit that hard for the points, but a lot of what you’re paying for is their speed and transport capacity. I think these are units you really have to put on the table to get a good feel for. 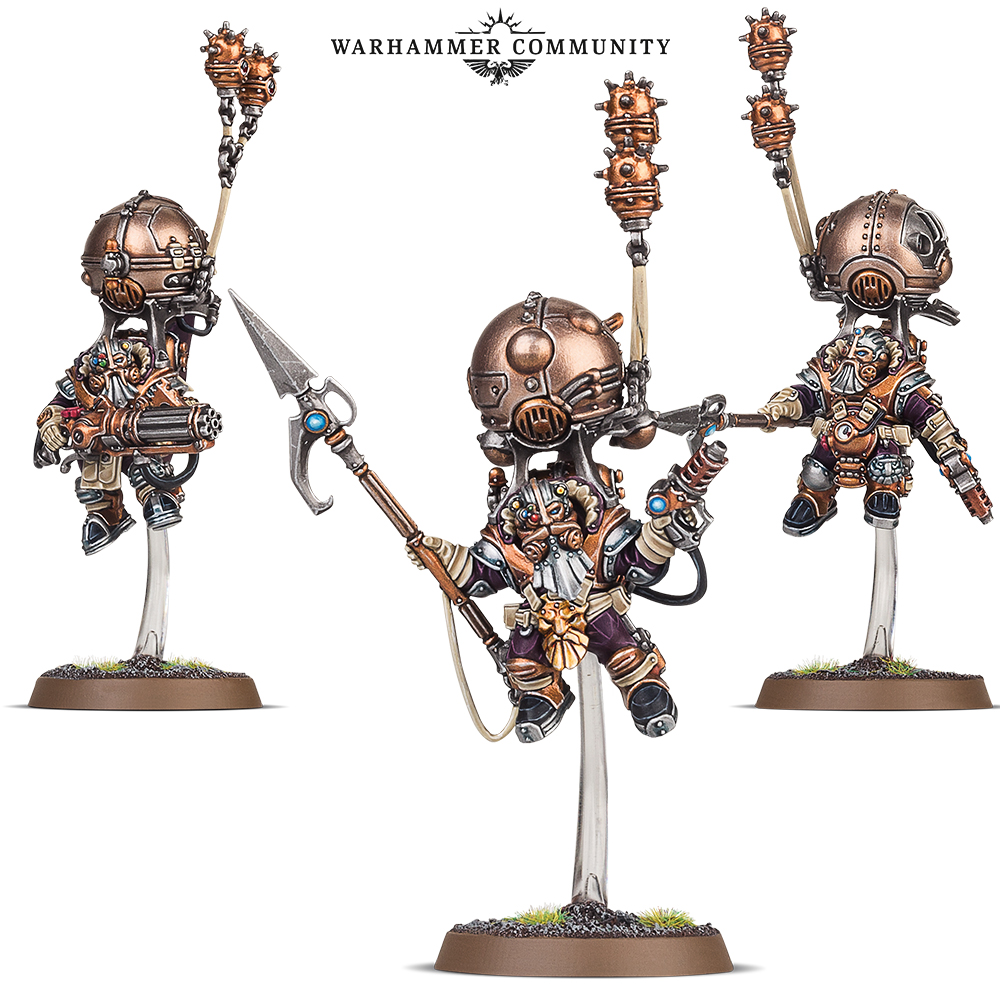 These are the “jump pack” units that fly suspended on balloons, and look quite cool. Both units have a 12″ move (and can fly), a 4+ save and 2 wounds. Not bad! They both can hitch a ride on a Skyvessel and ride with it without counting towards the transport capacity.

Both units have a wide variety of specialty weapons that can do damage, move the unit incredibly fast (the Grapnel Launcher can move the unit up to 24″ additional inches in the shooting phase!) or both in the form of the Skyhook which can hurt a unit and move the firing unit, too. Pretty cool.

Uniquely, the Skywardens have skymines that damage Flying units that end their charge move near them and they damage enemy units when they retreat from combat. Endrinriggers can repair Skyvessels for 1 wound in the Hero phase.

Both units are a bit pricey, weighing in at 120 for 3 of the Endrinriggers and 100 for 3 of the Skywardens, but at a glance they both seem pretty solid. 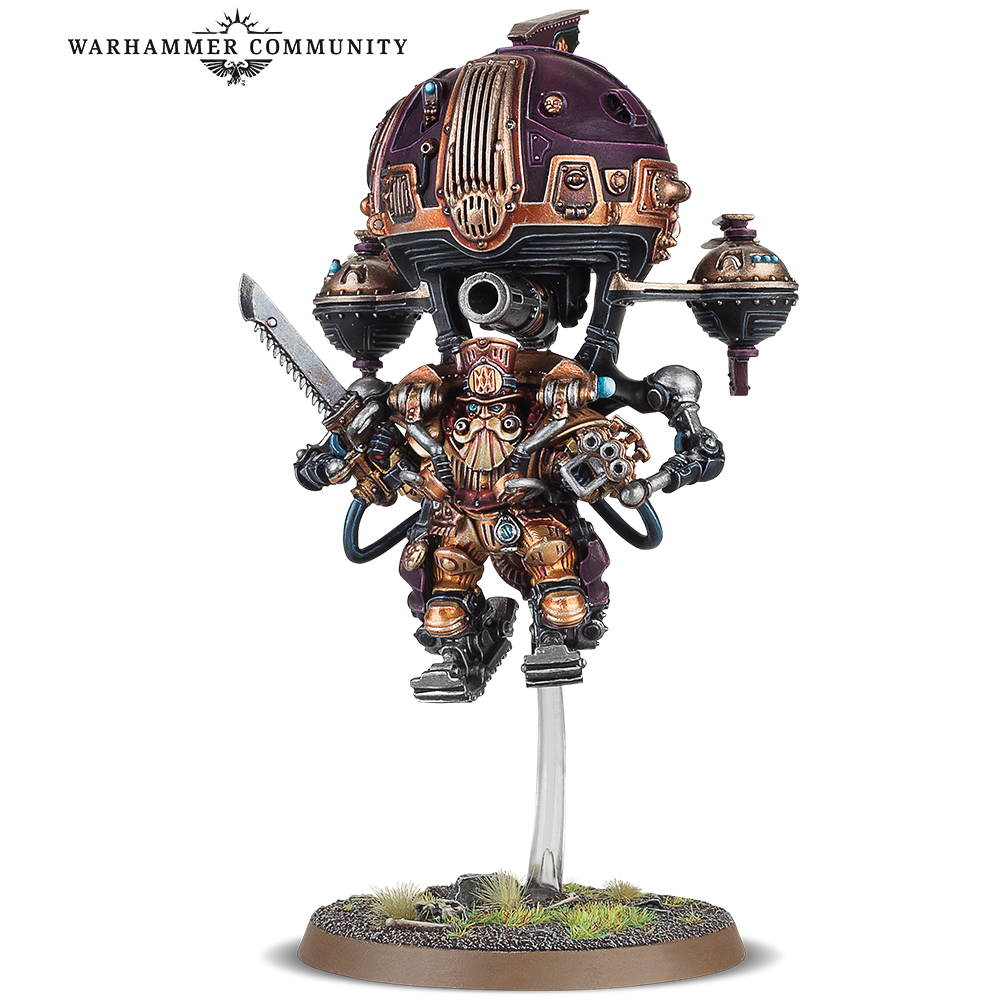 Brokk Grungsson is an interesting character. He’s fairly straight forward: he shoots things! With a 3+, 12″ move and 8 wounds, his base states are solid. He’s got three guns (including–and I kid you not–a mustache gun!), all hitting on 3’s, which is nice. He packs in a total of 7 shots, too, so quite the arsenal. His Gungsson’s Boast wounds on a 2 with rend -1 and does D3 damage, so he can take a bite out of many units. In melee, he’s got 4 attacks, hitting on 3’s, wounding on 2’s with rend -2 dealing D3 damage a pop. His Champion of Barak-Nar ability lets him reroll hit and wound rolls of 1 for Brokk Grungsson if his targets are either Heroes or Monsters. He also deals Mortal Wounds on the charge, and can super-charge his Saw to automaticlaly deal 3 damage per attacks in melee. He has the hitcher special rule to ride along with Skyvessels without taking up any transport capacity and his Command Ability, First Rule of Grungsson, allows Kharadron Overlords units within 18″ to charge even if they’ve ran in the same turn. Questionably good a shooting army, but perhaps there are some pieces of the puzzle I am missing here. At 300pts, I am not 100% certain he’s going to be taken too often. 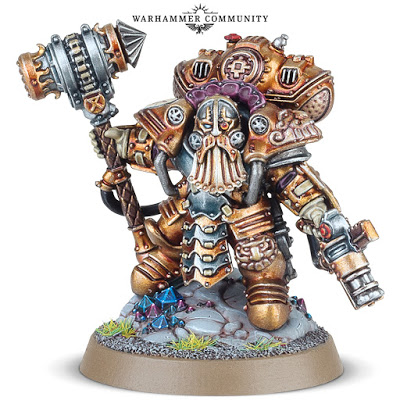 The Arkanaut Admiral is quite good, in my opinion. He shoots decently, with 3 rend -1 shots, punches OK, with 2 rend -2, 2 damage attacks, and is decently tough, with 6 wounds and a 3+. He, like Brokk, can reroll hit and wound rolls of 1 when fighting Heroes or Monsters, and allows Skyvessles to run and shoot if he is embarked on one. Lastly, he can Invoke the Code, giving 1 of 3 bonuses. He can make friendly Kharadron Overlord units ignore Battleshock within 12″, look out sir wounds to a friendly unit on a 5+, or reroll failed hit and wound rolls for himself in the combat phase. At 140pts, he is a tad pricey, but allowing units to ignore Battleshock is no joke. 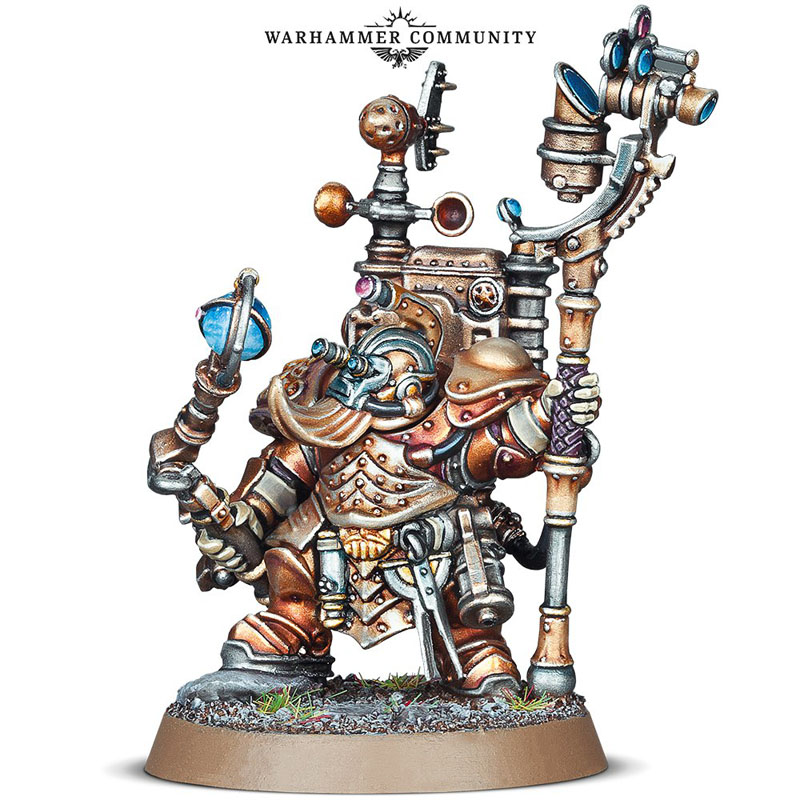 Aetheric Navigators provide you with spell defense, being able to unbind spells. They can also summon the Aeterstorm, which halves enemy units’ movement if they are within 18″ of him and can fly. If he doesn’t move, he can read the winds allowing all visible Skyvessels to reroll the dice when they run or charge. He’s got OK shooting and melee attacks and weighs in at 100pts. He’s decent. If you are playing against flying units though, he can change the game. Great in formats that use two lists or a sidebar. 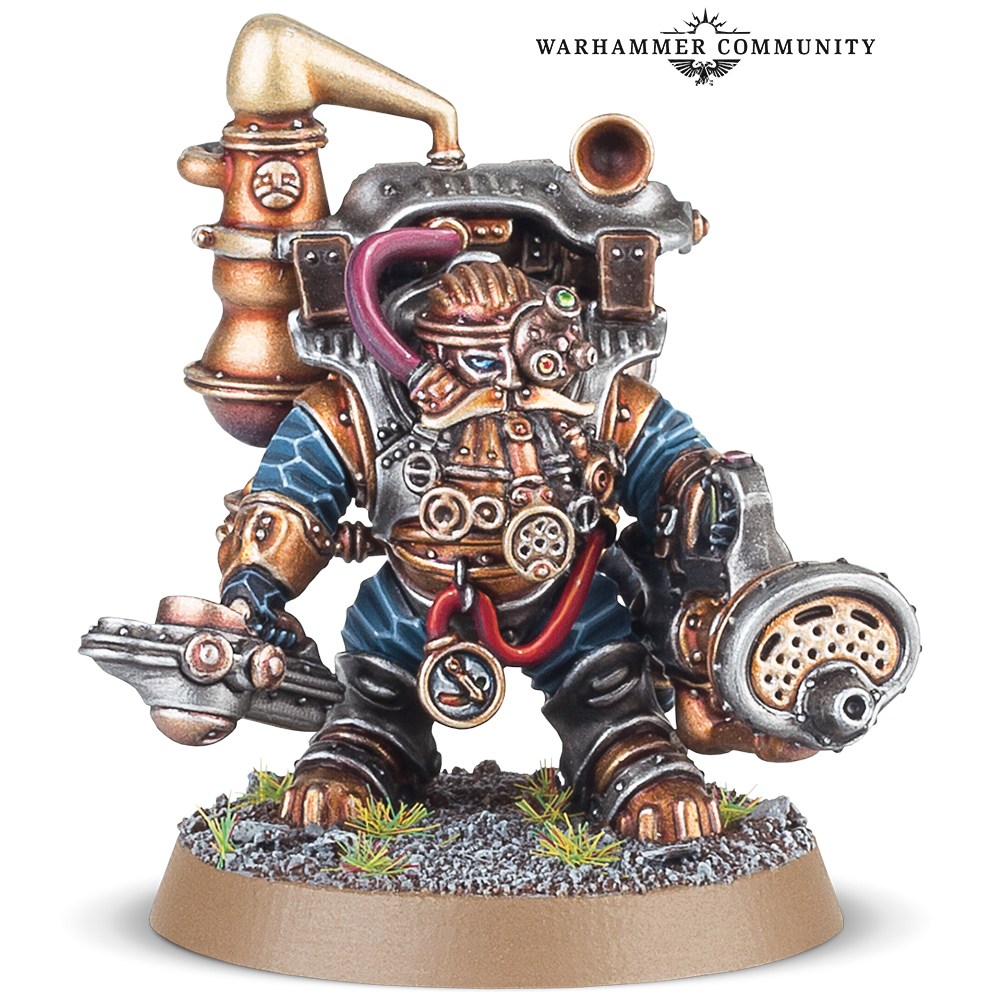 The Aether-Khemist is a real winner, to me. He packs a 3d6 shot gun with 10″, hitting and wounding on a 4+, rend -2 and 1 damage which is solid on it’s own. But his ability to buff a nearby Skyfarer unit with +1 attacks to one of their weapons (which includes shooting weapons) is amazingly good. You can buff up a unit like the Grundstock Thunderers who already have impressive damage output. Lastly, they reduce the number of attacks of enemy units in melee by 1 to a minimum of 1. Wow, for 100pts this is a great unit and I think will be the most common in Kharadron Overlords armies. 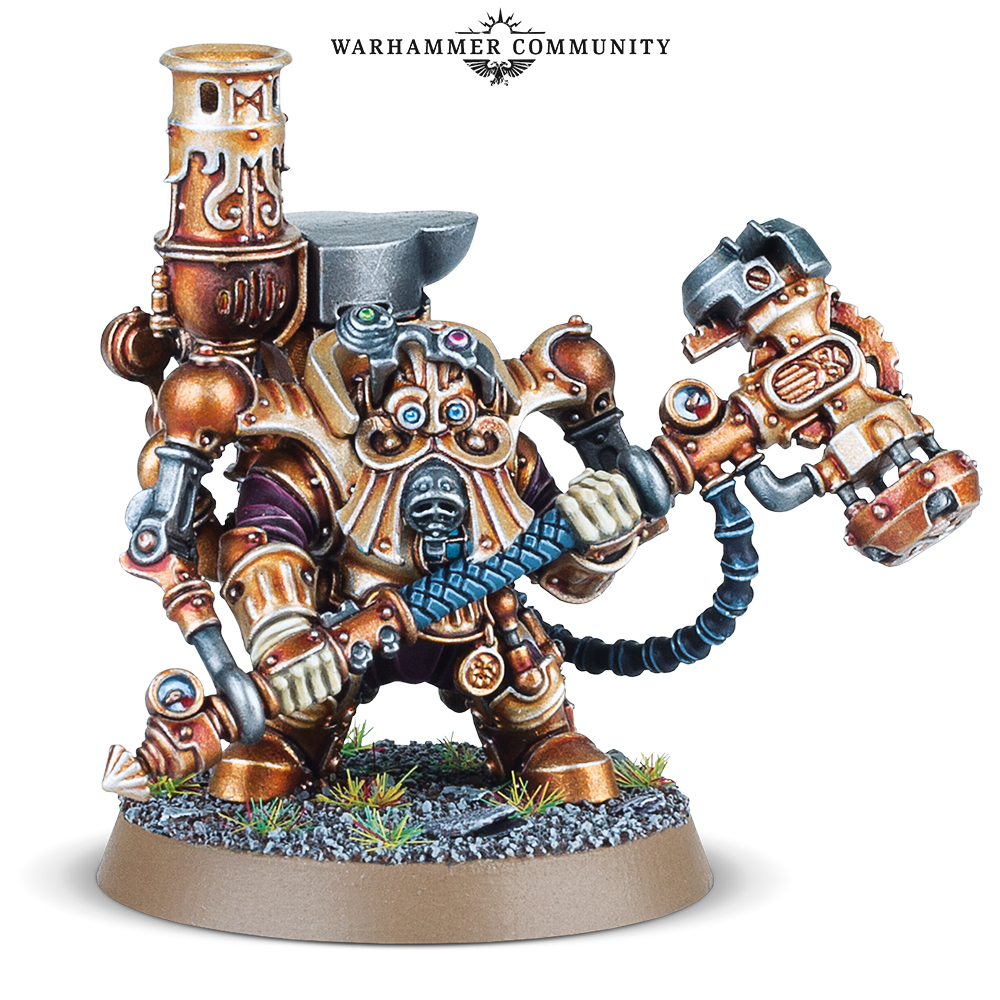 The Endrinmaster is a decent character, if a bit pricey at 140pts. He smacks things with his hammer which is quite good (3 attacks, 3+, 3+, rend -1, D3 damage) and can supercharge it up to always do 3 damage at the risk of a mortal wound on the roll of a 1, and can heal Skyvessels within 3″ for D3 wounds. Not bad, but as stated, a little pricey.

So there you have it! Part 1 of the overview done. This army looks great, and I think it will draw a lot of folks into the awesomeness that is AoS. What do you all think?

← Fairness and the Rules
Team Atomic Death Squad – Display Board →