A Beginner’s Guide to Legion of Everblight

You are here: Home › Tactics › Warmachine › A Beginner’s Guide to Legion of Everblight

Do you like Hordes, but think there aren’t enough dragons? What about a whole faction of dragon spawn and warped abominations! If this sounds awesomely metal to you too, then welcome to the Legion of Everblight!Check the Tactics Corner for more great articles!

Hey guys, BigVik here with another faction review, and this week it’s the Legion of Everblight! The high threat, beast spam faction that sets everything on fire. If you like dragons, fire, and the inevitable background metal music in your head as you WATCH THE WORLD BURN! 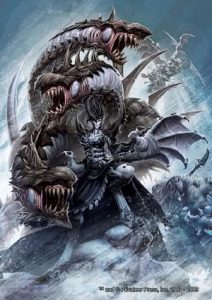 Of the children of the Dragon Father, Toruk, the self styled most clever of his children was Everblight. Ever plotting and planning, Everblight had more control over his blight than his siblings. Over time Everblight learned to manipulate his own blight to control or create living weapons to do his bidding. A long time before the present time of the Iron Kingdoms, the eleven armies of Ios converged and ‘killed’ Everblight. Though a dragon in this world can never truly be killed, they tore away his athanc and imprisoned it within an isolated mountain peak.

Centuries later, through manipulation of his surroundings, Everblight has re-emerged. But rather than re-forming his natural form of a dragon, he has spread his power through several warlocks, enslaved the Nyss by blighting them on a racial scale, and created an army of dragon spawn to do his bidding.

Everblight desires only survival, and that is only guaranteed through the accruement of power, through any means necessary. For thus has the Legion of Everblight been born. 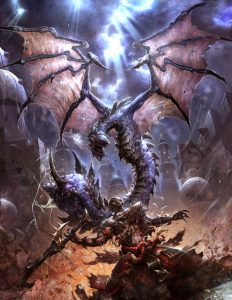 Legion is, in general, a ranged game combined with a beast heavy glass cannon game. The ranged game is generally going to look like a large number of scouts and other archer models, along with Nephilim Bolt Throwers and Ravagores, or something along those lines, to allow for some ranged game in your battle group.

The beast heavy game will be a threat overload, where you throw a large number of large beasts across the table in scary positions which your opponent must deal with or spontaneously lose either due to scenario or attrition when nothing is left to kill those big beasts. 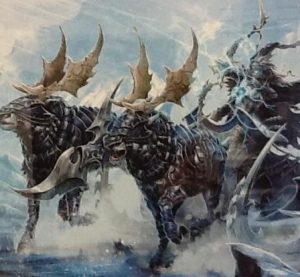 The Warlocks in Legion cover a variety of themes, from being hard hitting beat sticks like the Thagroshs of the world, to the absolutely scary ranged game of the Lylyths. Lets not forget Vayls 1 and 2 who each have their own different games, with one being a buff bot and the other being a spell assassin, a hard roll to fill in this game. Then there’s Absylonia 2, she throws a 10 gallon jug of beasts at your opponents and asks what he can do about… not much in my experience. 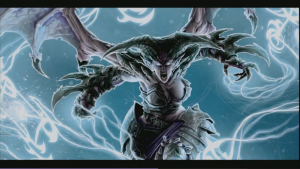 First up, Absylonia, Daughter of Everblight, or Abby 2. She has flight, high speed, mat, average Fury and 2 pow 14 claws with a pow 12 stinger, not game breaking but definitely enough to personally close a game out. The money maker here is Alpha Hunter, basically if she kills something of your opponent’s she gives a speed and mat buff to your  battlegroup, which is very scary since a large number of them have pretty respectable threat ranges. Spell Wise the only ones  playing into her regular strategy are Psycho Surgery, and Return Fire. Psycho Surgery heals each beast in your battle group, very good for getting those aspects backup late game, and Return Fire which allows a friendly faction model to make a basic attack after being targeted by a ranged attack from your opponent, never anything quite like getting 1.5 turns per turn!

Finally her feat gives a strength buff, flight, and range 2 on all melee weapons in her battle group, are you seeing the combos? Yea I thought so, she’s got one of the most back breaking alphas in the game, and piloted properly, there’s nothing left to kill those beasts after that big first hit.

Our next Warlock today is Lylyth, Reckoning of Everblight, Lylyth3. She’s got low fury, high speed and rat, with a 3 shot magical bow, eyeless sight and pathfinder. She has blood boon on the bow meaning she can cost a cost 3 or less spell for free after killing an enemy model once per turn. Spell Wise her important spells are Battle Host and Wind Wall. Battle Host increases the movement of her Beasts by 2, gives her an armor buff when close to one of them, and Wind Wall means if she doesn’t want you shooting her, you don’t get to. Her feat has a great name “THE REAPING.” It makes enemy models hit by a ranged attack, originating from a friendly faction model in Lylyth’s control range, become stationary. Its one of those feats that’s really simple but really scary in practice.

Now let’s put all of this together, she has a 21 inch threat magical bow that lets her cast wind wall for free after she’s done shooting, so she kills a few models, backs up and becomes immune to most return fire, she increases the threat range of her bolt throwers, because what else is she going to field. On the turn you finally have a plan to take her down, you set it up, pass turn, and she makes all of your important pieces stationary… or just kills your caster. She is very much the Caine 2 of Legion (pre nerf) with the exception that Caine was best at killing support staff then coming in for the kill, and Lylyth turns your army off for a turn, then puts you out of your misery like a knife to the back of the skull of the wounded deer she’s been toying with. 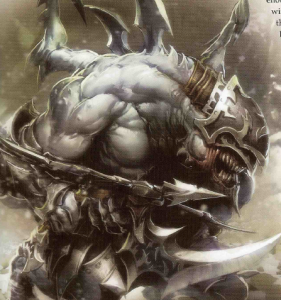 Beast Wise Legion has some interesting themes, nephilim a merger of elf and dragon with the closest analog being Uruk Hai in Lord of the Rings, but these are 10 foot tall dragon… things. They are the utility beasts, meaning they don’t see too much play. That is with the exception of the new beast, Azrael, which… if you play Legion go buy and play this beast, he’s crazy good. Next are the naga, though there only seems to be one or two of these guys, the Naga Nightlurker is a great source of ranged support fire with an animus that gives out blessed and magical weapons, very good!

There are some very unique character beasts in this faction. We already mentioned Azrael, next is another Nephilim, Zuriel. He’s a high threat dual blade wielding badass! His swords hit hard, with high-ish pow and high mat and a 2 inch reach. What makes him shine is his dragon breath assault shot, making him capable of incidentally killing some casters. The model also has precision strike, so he chooses the column/branch his damage goes to on ‘Jacks and Beasts, making him very efficient at disabling troubling jack spam. 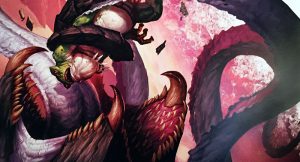 The warriors in Legion follow a few themes. The first race to be taken into the fold were the nyss, elves of the northern wastes. These guys make up the bulk of the Legion’s forces comprising archers, scouts, swordsmen, and many others. Grotesques are essentially gargoyles from the old television show, they’re high threat, sneaky, and have some cool shenanigans like gunfighter spray 6 brain damage shots, which keep your caster from casting anything for a round. Blighted ogrun are essentially barbarian ogres from DnD but… blighted. They’re tough, they hit hard, simple but effective.

The last things I want to touch on are the two strongest units in the faction. First, raptors, 21 inch threat archers with poisoned bows that are effectively weapon masters against living models, very scary. Finally the Hellmouth, the mini-Sarlacc pit of WarmaHordes, it grows tentacles out of the ground to hit opponents’ models, drag them in and eat them, it has 8 boxes, armor 18 and impervious flesh, one less die on damage rolls against it, so it’s  a definite threat every time, and it can be pretty tough to remove. 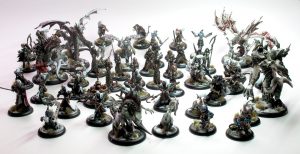 Again as a whole, Legion is a glass cannon kind of army which lives by the credo; Hit early, Hit hard, Hit often. They fold to outrageous damage skews, but then they can drop the lylyth ranged spam and just dance around outside the threat ranges and laugh. Lots of people though this faction got nerfed into the ground, but I feel Legion is in a perfectly strong position right now.

That’s it for this week, come back next week for my look at a couple of the ‘Jack oriented theme lists stomping around the meta!

Posted on April 14, 2017 by BigVik in Tactics, Warmachine