Hey all, Danny from TFG Radio here again to go over another Troop-turned-Fast-Attack entry in the Tyranid codex, the Sky-Slasher swarm!  Of course, if you want some more tech, go check out Frontline’s Tactics Corner! 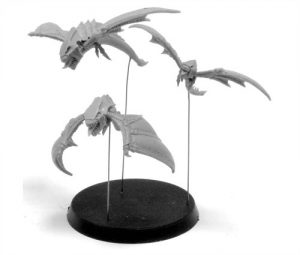 Sky-Slasher Swarms are all about speed and volume of attacks,  but these little buggers are sadly outpaced by other options.

The unit may take 6 additional bases.

Sky-Slashers are just winged Rippers, so they very much have the same exact options, which makes sense.  Just like Rippers, they have no equipment standard, and you can give them a gun, which isn’t too terrible as 4 twin-linked shots isn’t horrible for under 5 points per base. Adrenal Glands is likely not too helpful as S4 is good on the charge, but as they are Jump Infantry, you don’t need the extra burst of speed from fleet as much. Toxin Sacs is real money though as it solves the S3 problem.

In general, cheaper is better, and as they have Deep Strike native, you can run these bugs naked as they day they were spawned, but if you do want to upgrade, Toxin Sacs is likely the best way to go as it greatly increases their melee power against just about everything out there.  Spinefists can be funny, and if you are really dedicated to having a full unit of 9, 36 twin-linked shots at BS2 isn’t too horrible, but it’ll only net you on average 2.2 Marine-Equivalent kills, which isn’t too great for almost 40 points worth of upgrades. 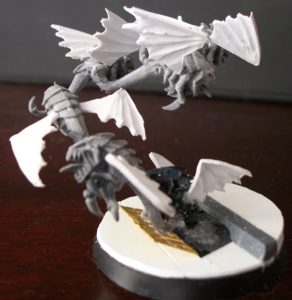 You can try to make a bunch…

Just like Rippers, Sky-Slashers have the unfortunate problem with being saddled with the worst IB, but again thanks to low model count in unit and multiple wounds each, they don’t suffer as badly as others.  Swarms means that these little guys are super vulnerable to artillery spam or even a standard flamer, but at least they are Fearless, so you can use them as a tarpit without having to worry about Synapse nor will they ever fall back.  They are Jump Infantry, so yay for Deepstrike and if you only move 6 in the movement phase (and as swarms, they ignore terrain anyway), you do get some sweet S3 hammer of Wraths on the charge.

So in short, watch out for templates and remember these little buddies are fast.

So, why take them?

Well, the Sky-Slashers do excel at one thing: holding up enemy units.  With 3W each and a low profile to hide (assuming you make them that way), they are pretty tough for what you are paying.  A full unit of 9 is not much over 150 points, and that’s 27 wounds and 36 attacks base.  With native Fearless, they can certainly hold the line against anything, and as long as you aren’t fighting massed S6+, they are going to stay there for a good amount of time, and if you do give them Toxin Sacs, they can threaten a lot of units with just volume of attacks back.   I actually like Sky-Slashers not for their deep strike as I think larger units are actually more tenable, and 9 40mm bases can be hard to effectively land.   As they can move 12 and then run, you can start them on the board and have them flood the center to help delay any enemy units trying to take the center of the board.   Sky-Slashers don’t make bad tarpits simply for the fact that they are fast enough to dictate the terms of the fight, namely where it happens on the board.  This can be a life-saving tactic to hold up units or even just get in the way, letting you set up counter-charges.

You can try and take them in a super MSU build where you are just dropping down as many units as possible to try and flood the board, but Rippers are just better at this thanks to Objective Secured and being cheaper base for base. That said, if you want 6 units of Rippers and 3 units of Sky-Slashers, why not then?  That’s a lot of bases to remove.

So why don’t you really see them?  Just like Rippers, they are super vulnerable to S6 attacks, and well, there are just far more of these than there used to be.  As they are only T3, any S6 wound is going to pick up a base at a time, and as they are swarms, blasts and templates have a field day. Renegade Artillery spam, regular old AM artillery spam, even a thrown Krak Grenade can do some serious harm to the unit, and Sky-Slashers really can’t hang with all of the high strength weapons out in the world, not to mention the many blasts and templates that a lot armies cart around.

In close-combat they are safer, but S8 is not at all uncommon in melee and neither is S6, so these little bugs are still very squishy. While they can ignore grav, there is too much standard shooting and melee that really threatens them, and so they are not at all survivable enough to be taken in any real concentration.

The big problem is that if you want a fast tarpit unit, Gargoyles are just categorically better choices, and if you want small, MSU style units, Rippers are better as they are Objective Secured and can get Deep Strike, all cheaper base per base than Sky-Slashers.  Let’s also not forget that there is no GW model except for FW for Sky-Slashers, so you are on your own with making them, which can be a barrier of entry for those of us who don’t model that well or have the time to do a lot of conversion work.

So, is there a reason to bring the flying teeth-worms? No, not really.  There are superior choices everywhere, and Tyranids are not a strong enough codex to get by with subpar choices.  They can be pretty characterful and fun if you have them for more casual games, and even in Kill Team, they are actually a blast, but if you are playing a game to win, they are not a great choice.

Welp, let’s move on through the Fast-Attack slots and see what we can see.  As always, thank you for reading, and check out our follies over at TFG Radio.