Hey again everyone, Danny from TFG Radio here to talk about that Pig-Pen of Tyranids, the lynchpin of defense, the Venomthrope! Of course, you can see through the cloud of spores easily by going to Frontline’s Tactics Corner! 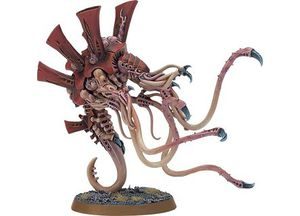 The Venomthrope is a dedicated support piece who buffs the defense of every bug near it, and it is a necessity for a lot of walking bug builds. 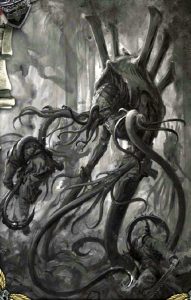 Toxic Miasma: Once per game in the assault phase, all enemy units engaged suffer a number of hits equal to number of models in base contact with this unit.  These are resolved at S3 AP- Poisoned (4+) Ignore Cover at initiative 1.

Upgrades: You may add 2 more Venomthropes to the unit.

Ok, so there isn’t a lot of upgrade potential here, and really, you aren’t taking Venomthropes for these things.  Lash Whips can help against squishy, high initiative units as the Venomthrope swings at I6, but their WS3 and 2 attacks are not great, but again, against very squishy units like Harlequins, you can do a bit of damage before you die.  Toxic Miasma is again very corner case as Venomthropes don’t have a lot of survivability, so you’ll likely not make it to I1, but they, it could help every once and awhile. 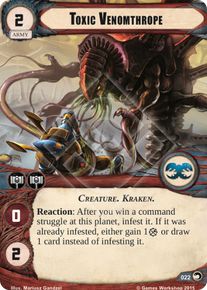 Instinctive Behaviour (Lurk): If Venomthropes are out of synapse and fail a Leadership 6 check, they may fall back, or they may have to seek cover to be able to shoot and can’t charge. Eh, not terrible but never good either.

Spore Cloud – All friendly models with the Tyranids Faction that are within 6” of a Venomthrope gain Shrouded.  Here is the money.

Ok, so it should be pretty clear why you would want to take Venomthropes.  Spore Cloud is absolutely a great ability, and it gives a lot of defense to Tyranids.  Getting Flyrants to have a 2+ jink ain’t bad nor is giving a unit of 30 Objective Secured Termagants or Hormagaunts a 5+ in the open or 3+ with standard cover.  If you face an army with no ignores cover, a Venomthrope suddenly makes a lot of Tyranids far more survivable.   The super poison isn’t too bad as it means that the Venomthrope can sort of help in a fight, and it having its own Shrouded means that it likely always has a 3+ cover save from hiding behind whatever it is buffing with Spore Cloud. If you want to try taking a big nasty like a Hierodule, you better have one of these little bugs tagging along.

So, what do you do with these guys?

The very obvious answer is to use them to support a front line, whether that be hordes of little bugs or a few big bugs.  Venomthropes are pretty much just support pieces, but when they work, they can make an army work.  Yes, 60 T3 bugs is easy to kill, but 60 T3 bugs with a 3+ save? That starts to become difficult.   Pretty much all of the Monstrous Creatures in the codex benefit (or even rely) on the cover save from the Venomthrope, and in general, for less than a Lictor or a Zoanthrope, you can radically increase the survival of your units.   This is what they are made for, and they are very niche, but they are essential.  Venomthropes are one of the only ways to really increase the durability of the bugs.  I’d like to wax poetic but it, but really, it is that simple: Venomthropes keep your bugs alive by giving them decent cover saves.

So why aren’t they everywhere? Well, the reality is that they are hurt most by the things outside of the codex, namely a lot of ignore cover.  Tau alone make Venomthropes cry because their whole ability is negated, and all the bugs around them start to drop.  The Hunter’s Eye still means that Grav-Centurions get to kill anything at will when they drop, and since they are T5 with a 2+ save, a lot of bugs struggle to kill them.  This is what hurts Venomthropes the most: there is too much ignores cover in the game for them to be useful.

They are also only T4, so they can get Instant Deathed easily, they don’t fight well, so once they are engaged in melee, they are going to die terribly, they are slow, and they don’t have synapse, so you can’t use them as MSU objective grabbers.  They also compete with Zoans and Lictors for elite slots, and both of those units are far more dependable.

So are Venomthropes competitive? Yes and no.  Yes in the sense that you can make a strong, strong army using them as support pieces, but no in the sense that too many other competitive builds will ignore them and their abilities.  Venoms really belong in a friendly game where you want to have a good mix of units for variety’s sake, but in the competitive scene, unless you get to tailor your list, they are not really worth it.   Thanks for reading, and as always, see our troubles and triumphs over at TFG Radio