Hello everyone, Danny here from TFG Radio with the first of our fast-attack fellowship, the speedy little mini-bosses of the Tyranid hive fleets, the Shrike Brood! As always, go hit up Frontline’s Tactics Corner for all your gitgud needs. 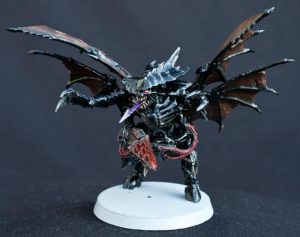 The Tyranid Shrike Brood  is a mix between a support unit that keeps little bugs in line but also brings some decent melee and shooting punch to the mix, all on a jump infantry chassis. 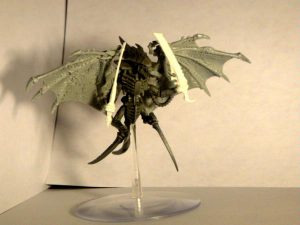 Seeing as Shrikes are just Warriors with Wings, they have the exact same list of kit, and just like warriors, they can go of two routes: They can arm up and be a shooting unit or they can bring out the swords and go for pure melee. With 3 attacks base, they can make use of the combat upgrades, and with inherent WS5, they are more threatening in melee to the average trooper than they are shooting with their BS3. That said, each Shrike is going to shoot 3 times a piece regardless of just about any gun you give them, so with enough dakka, they can still do some work.

The basic Bio-Cannons are still a bit meh although the Barbed Strangler can do some work against densely packed units like zombies, conscripts, or orks.  The thing to consider here that as Jump Infantry, Shrikes do get Deepstrike, so loading them up to shoot means they can drop in and blast.

For melee, just like with Warriors, you can make these bugs decent fighters with either Bone Swords for AP3 and the chance at ID or just rending claws for an extra attack each and rending.   Also, Shrikes still get Flesh Hooks, which is pretty amazing for Tyranids.  As always, the issue here is cost as once you start upgrading them, they get real pricey, real quick. 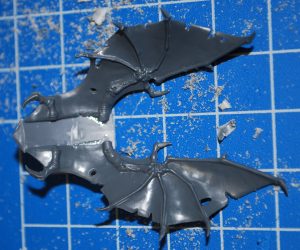 You’ll need a lot of these.

So you have only a few Special Rules here, and just like Warriors, they are all about support.  Shadow in the Warp can be clutch, especially with native Deep Strike, as it makes psychic heavy armies easier to hit with Scream/Shriek as well as makes Perils of the Warp far more dangerous.   Synapse is never a bad thing to have, and as Shrikes are much faster than Warriors, you can get some much needed coverage just about anywhere with them.

If you play Kill Team, Shrikes are great and a good alternative to Warriors as they are much faster, so just giving them Rending Claws can make them pretty dangerous.

Ok, so what do with Warriors With Wings?  Pretty much all of the same tactics apply save one.  Shrikes make an excellent backfield shock as since they have Deep Strike, you can load them up for shooting and suddenly plop up to 9 beefy bugs that also lay down some decent firepower. Loaded with Deathspitters, you can put out a lot of S5 right into the rear armor of vehicles or start laying down some hurt on backfield objective campers.  Even a unit of 5 Shrikes isn’t a completely laughable threat, so your opponent will have to pivot to deal with them in some way.  If you go super heavy and just load up with all the guns, you can do a respectable amount of damage, and the bugs’ short ranges are mitigated by the fact that this unit just gets to show up where it wants (well, after scatter).

You can also make use of WS5 and 3 attacks base to load them up for combat.  With just Rending claws/Scything Talons and Flesh Hooks, each bug pumps out 5 attacks at WS5, S4, and Rending.  That’s not bad at all, especially considering that these bugs have 3 wounds each.  The Flesh Hooks also give them just a tiny bit of shooting which can help soften up some more numerous targets.   You can really go for broke and give them all adrenal glands too for Furious Charge, and then you have S5 attacks on the charge, and with Rending, that lets them threaten technically any armor value although highly unlikely.  You can also use them as a big center unit surrounded by little bugs as an Synapse escort, and especially with a Venomthrope for back up, you can get them some decent protection against anything that doesn’t ignore cover.

While they are not great at being your own backfield objective campers/synapse beacons, they can be used as great objective stealers.  They do not have Objective Secured, but they can Deep Strike, and at just under a Mr. Grant, they are not too expensive, but with just Devourers and Scything Talons, they can threaten a lot of weedy backfield campers.  With some Reserve manipulation, you can delay these little bugs to come in on turn 3 or 4, and again, with both Deep Strike and the ability to move 12 in a turn, they can really play havoc with the objective game for your opponent.

Of course, these are bugs, so they come with downsides, mostly centered around that the Tyranid codex is just underpowered compared to the other toys out there.  Just like Warriors, at T4, Shrikes are highly vulnerable to Instant Death, particularly the ever common S8, whether that be melta or powerfists.  To make it even worse, they only have a 5+ save, so they are super easy to gun down with just volume of fire. If your army can easily kill Space Marines, they can kill Shrikes even easier.   Granted, the drop to 5+ makes sense for a faster, more agile bug, but it still really hurts their survability, especially since they are best when dropped in unsupported to some obscure part of the battlefield.   As with most bugs, Shrikes lack an invulnerable save, and they rely on one psychic power to get them Feel No Pain.  So, unfortunately, Shrikes are even more vulnerable than their Warrior cousins.

BS3 also hurts as it limits the effectiveness of their shooting, and while you can give them a Tyranid Prime (LOL) to boost them to BS4, it cannot Deep Strike, so now you are paying an extra 200 points for a Prime and a Tyrannocyte.  Ouch.  The Shrikes are actually not too bad points wise, but if you are trying to upgrade them to do real work, they quickly spiral out of their efficiency.   Another random issue is that there is no official model for them; you have to get wings from somewhere and then glue them onto the Warrior models, and while I love the Warrior models as a kit, it is a hassle to find after-market parts.

Are Shrikes competitive? I think you could build a bit of a corner-case list with them as objective stealers, but on the whole, no.  They are great in Kill Team, and they are fun to use in more casual games.  They also give you some great opportunities for cool conversations, but alas, they will likely only be brought out for some narrative style games.  Thanks as always for reading, and stay tuned as I stumble through the Fast Attack slot here, and go check out TFG Radio.