Hello everyone, Danny from TFG Radio here to talk about that haphazard hulk, the Haruspex.  Of course, you really should check out Frontline’s Tactics Corner for everything under the sun and more. 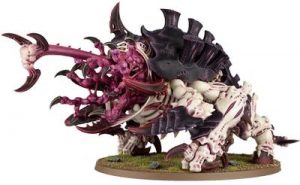 The Haruspex is a dedicated melee beastie designed to hit hard and slowly regenerate itself while in combat, but it is hampered by a few key weaknesses. 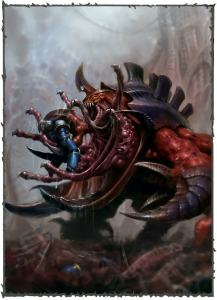 Toxin Sacs (4+ poison), Adrenal Glands (Fleet and Furious Charge), Regeneration (a 4+ It Will Not Die roll)

So the Haruspex has a decent amount of upgrade potential to go along with its kit.  Grasping Tongue isn’t a bad attack as with precision shot, you get a 16% chance to snipe out a Powerfist to help limit the heat the Haruspex takes in combat, and Crushing Claws means that this big bug is likely to pop armor.  Acid Blood isn’t too exciting, but it can occasionally help.  In terms of upgrades, the real winner is Adrenal Glands as this bug needs more speed and fleet helps, and if getting the charge, S8 with Armourbane means this bug punches AV14 on average dice.  That’s not bad at all.  Regeneration seems like it would synergize well, but it is a lot of points on an already expensive bug. 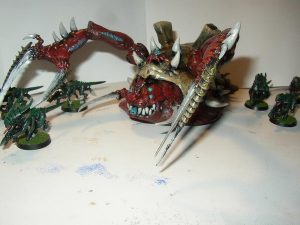 Fearless: No running away here.

Feeder-Beast: The Haruspex heals a wound if it caused an unsaved wound in the assault phase.

Instinctive Behavior (Feed): If it fails an LD7 test out of synapse, on a 1-5, this bug cannot run/shoot and must attempt assault the closest viable enemy.  On a 6, it does the same but receives Rage.

Rapacious Hunger: If this bug charges, it gains a bonus attack for each unsaved wound it causes. These attacks do not create new attacks, and Hammer of Wrath, Acid Blood, or Tail biomorphs do not count.

Ok, so the special rules definitely reinforce what this bug wants to do.  Feeder-Beast is helpful for letting the Haruspex shrug off chip shots from melee, and since this happens in any assault phase, you can theoretically heal 3 wounds per game turn (if you take Regeneration).  Rapacious Hunger makes each Haruspex a mini-Old One Eye, and in an ideal, ideal situation, a Haruspex can theoretically pump out 10 attacks in one turn assuming IB roll of a 6 and all 5 initial attacks hitting, wounding, and causing an unsaved wound.  This is likely to almost never happen, but in terms of averages, you are looking at an additional attack per charge.   IB Feed is actually not too terrible as really, it just means the Haruspex has to charge (which it wants to do) and 1 out of 6 times, it will get Rage.

Ok, so what do we do with this beastie? Well, the Haruspex is all about brute power, and with Crushing Claws at initiative 3, it is pumping out S7 armourbane attacks at AP2, which isn’t terrible.  The Haruspex, much like Old One Eye, is great at popping vehicles, so sending it up against anything on a tread is a good idea.  The Haruspex can even tangle with most dreadnoughts as it has enough wounds to soak a few powerfist hits, and it will likely punch through in one round.  With Adrenal Glands, getting S8 armourbane really does equal dead vehicles as the average penetration roll with be 15.  That’s not bad at all.

With its ability to heal, the Haruspex is also not too bad at eating small chaff units as it will be able to shrug off a wound here and there, keeping it in the fight and healthy.  If a Haruspex is at half wounds, it is worthwhile to send it into a larger, squishier chaff unit to heal up a few wounds before going back to hunting something more valuable but more dangerous.  Acid Blood helps it hit back on low initiative threats, and if the dice love you, a Haruspex can throw out more than a surprising number of attacks.  The Haruspex loves it a Tyrannocyte as it means that the Haruspex can get into the scrum without taking fire, and a T6, W5, Sv3+ beastie can be pretty hard to deal with if you get it out of the threat range of your opponent’s heavy hitters.   A Haruspex is best at running around the backfield, eating chump units and forcing your opponent to split attention.

Of course, this bug almost never sees the table in competitive play for a few big reasons.  The first is Speed.  This bug is slow.  You almost have to buy adrenal glands for it to at least get it a reroll on run/charges to help it along, but it is not going to catch too many units, and because it is so slow, it will often get charged.  The Haruspex needs to charge to really do damage, but it is too slow to really guarantee this.

It also lacks the stats that make it truly threatening. WS3 on a melee bug? Really? Making this bug hit on 4s against most everything is terrible, especially with only 3 attacks base.  That is just wrong.  It is supposed to just keep eating and eating, but it sucks against Tarpits because with only 3 attacks, it will pretty much never clear them.  Let’s not forget that it is only initiative 3, which is higher than many bugs, but in the era of Knights, it will get a D-sword to the face by Knights before ever swinging.  The Haruspex would be a good answer to Knights if it at least hit at I4 as you would likely trade pieces, which works out for the Nid player.   Let’s face it, T6 and W5 is good, but it is not that good at this point, so it really doesn’t have the resilience that you’d expect.

Finally, cost is an issue.  If you take a Haruspex with Adrenal Glands as the near mandatory Tyrannocyte, you are looking at Land Raider sized points for a model that will not get to charge until Turn 3 at best.  That’s not so good.  If you throw on Regeneration, this bug is almost 200 points, and it will still die to any dedicated firepower.

So, is this revival from EPIC worth it on a competitive level? Mutoid-Man says No Way. It is too expensive and lacks the kill needed to really do much. It is a great looking model, so for friendly or narrative games, it can make a great addition to the table, but remember that it is a handicap in an army, not a benefit.   Thanks as always for reading, and of course, come see what we’re doing over at TFG Radio.