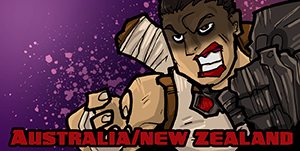 Scott Devall has the report for the largest Australian ITC event complete with army and LoW breakdowns as well as a rules showcase of how they handle slow paying in Australian 40k. (Hint: It may involve giant spiders with mana bars).

Hey guys, Scott Devall here from The 2nd Wave Podcast with a TO’s report for the Australian Warhammer 40K ITC 2016 Championships held at Cancon 2017 on the 27th to the 29th of January at EPIC in Canberra. This one is going to have plenty of meat to it to digest and give solid perspective of the Australian 40K Scene. 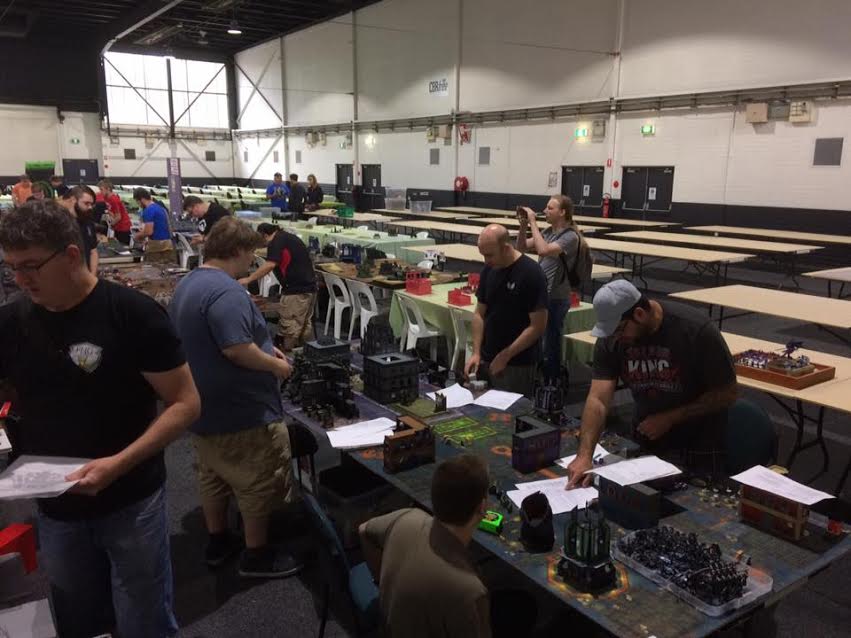 The tournament was 1850 Points with 8 Games being played over 3 Days. This has been the traditional format for the Main 40K tournament at Cancon in previous years. The format was almost identical to that of the ITC with a few adjustments to better suit the Australian Tournament scene, with a Super Heavy/Gargantuan Creature Lord of War choices cap in place for the tournament. The Missions that were in use were my own modified missions that are based off the Standard ITC Missions that are better suited for the Australian Tournament Scene and using the Straight ITC FAQ with our own rulings on the Interim ITC FAQ rulings. The event reach 80 Players out of a 96 Player capacity, which was not only the largest ITC Formatted event here in Australia to date, but a 66% increase on the previous year’s attendance for the Main 40K tournament at Cancon. It was a personal goal of mine to get to 80 players for this tournament and I’m quite humbled by the turn out as a TO and member of the 40K community. 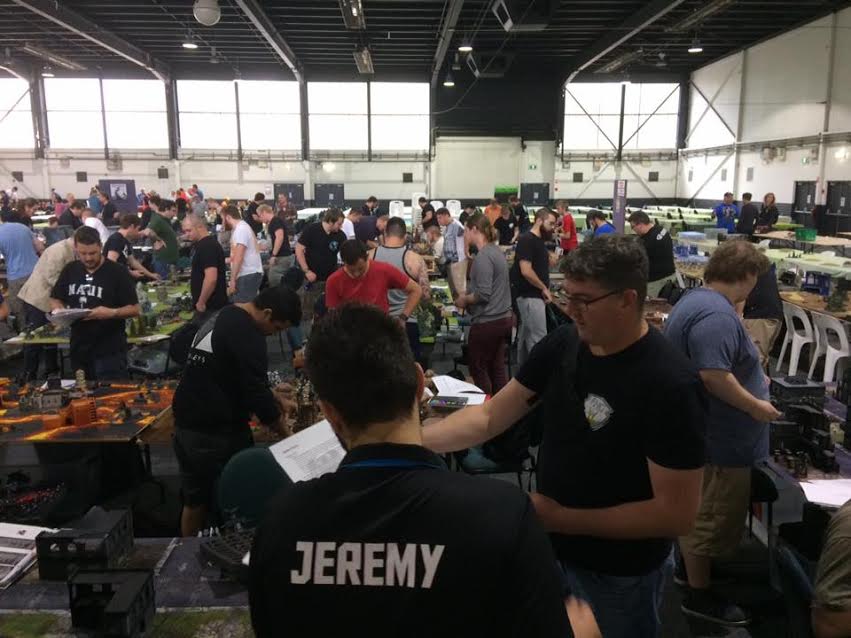 The format for the Championships was straight ITC apart from a Super Heavy/Gargantuan Creature Lord of War points cap. Now, I have been slowly increasing this cap over the past year and a half at the ITC events I have run as I have perceived that the scene is slowly being more aware of them and factoring in to deal with them with their lists. The points cap for them was that you can spend up to 650 Points per SH/GC model in your army and up to 900 Points per army. This allowed for units of 2 Stormsurges as well as 2 Imperial Knights of any variety in armies, plus allowing for the usual suspects of both forms of Wraithknights and some unusual ones, like Astra Militarum Stormlords and Big Mek Stompas. There was a total of 30 Super Heavy/Gargantuan Creature Lords of War present at the tournament and here is the breakdown of what was present on a per model basis: 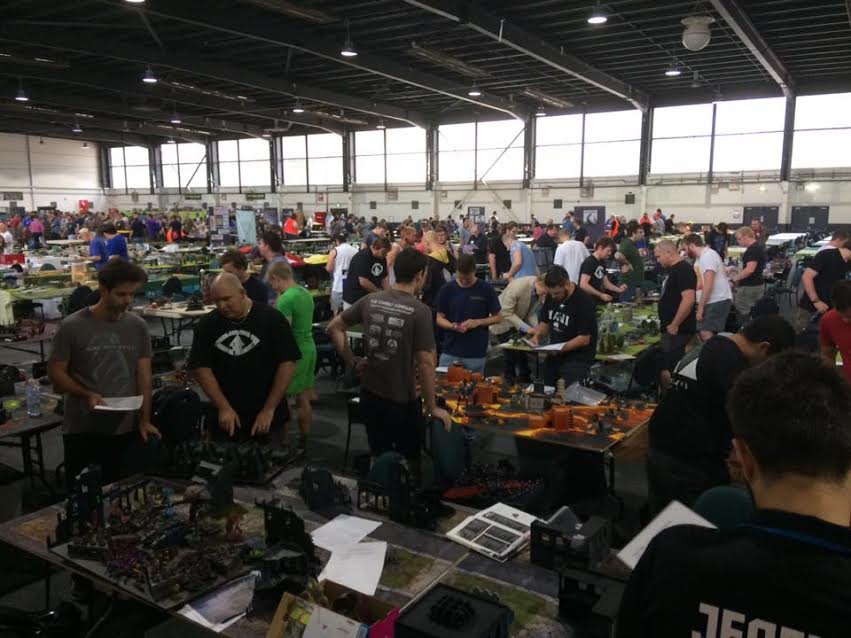 The meta for the Championships was quite diverse and was the same level of diversity that I have seen at my previous tournaments. So here is the breakdown of the meta as per Primary ITC Factions: 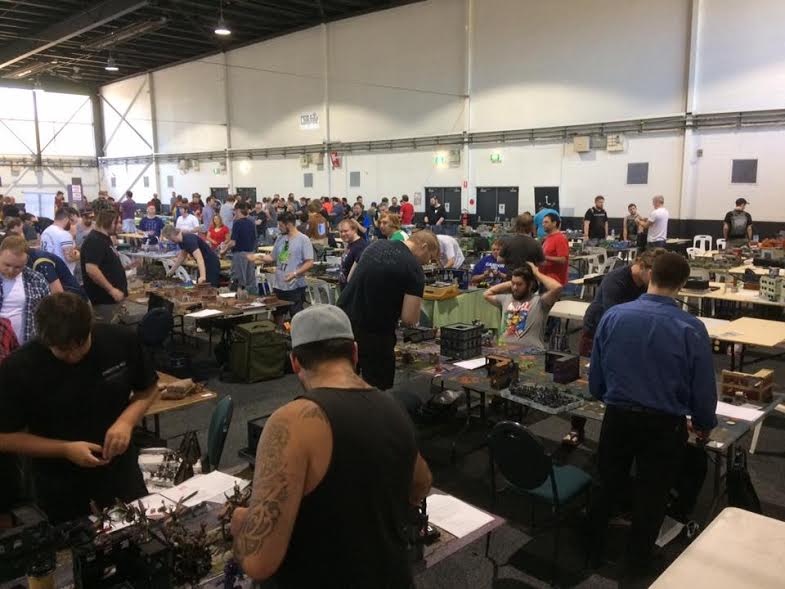 So, I decided to modify the ITC missions to have a sliding scale in terms of the ‘degree of victory’. I have been running these missions for about a year now and they’ve been working the exact way that I had created them to do as well as getting a great response from players who are playing these missions. Here’s a quick run through of how the missions are modified:

With the Aus Championships being an 8 Round tournament, two of the missions were repeated. Now, I didn’t make which two missions would be repeated public until the event itself, however the missions that were repeated was Modified ITC Mission 3 and 6. I did change up the order of the missions, which started with Mission 6, then Missions 1 through 6 and finishing with Mission 3. So Kill Points and Crusade were duplicated because those were the 2 out of the 3 possibly choices that would make for interesting matches, with the other possible choice being Mission 1. 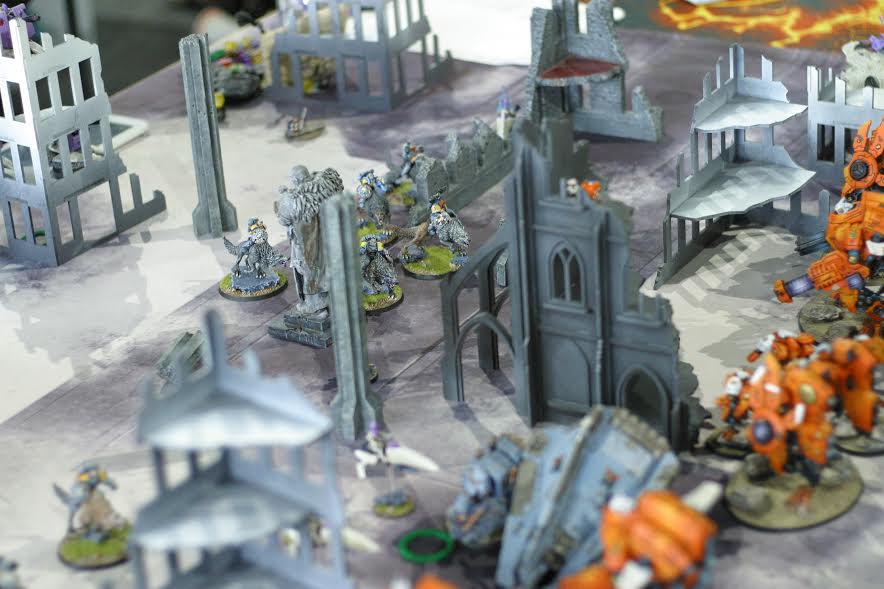 Slow play is something that has been discussed as being an issue with the game at the moment. With armies getting free point either through Summoning, Formations, etc, games aren’t just straight 1850 points anymore, they’re sometime 2000 points or more depending on how many free units are on the table and such. From this comes the issue of Slow play. Over here in Australia, at least from the other East Coast events that I know of, we combat this for the most part using a Slow Play Table, which assigns a number of points to a player depending on what turn the games ends unnaturally on. Depending on the event, these points will vary, but for the Championships, here’s the points for Slow Play:

For every 8 slow play points that a player accumulates, they a penalised 10 Battlepoints. However, as a TO, I tend to wait for a trend to appear so that I am not hitting players who aren’t at fault for slow playing and depending on the number of rounds, will depend of how many rounds I wait before I assess a trend for a player and apply those points. At the Championships, there were 11 Players who had accrued enough of these slow play points to incur the Battlepoint penalty with some being penalised more than once. That’s just under 14% of all the players who were in attendance, which I believe is a great percentage to be at with how the game is currently. It’s mean that just over 86% of players are considering their army choice going into a tournament so that they’re able to get a full game with a natural conclusion within the given round times, which was 2 and a half hours. The tournament ‘standard’ for Australian 1850 Point events is between 2and a half to 3 hours per round, and most of the time player can get a full game in during that time. 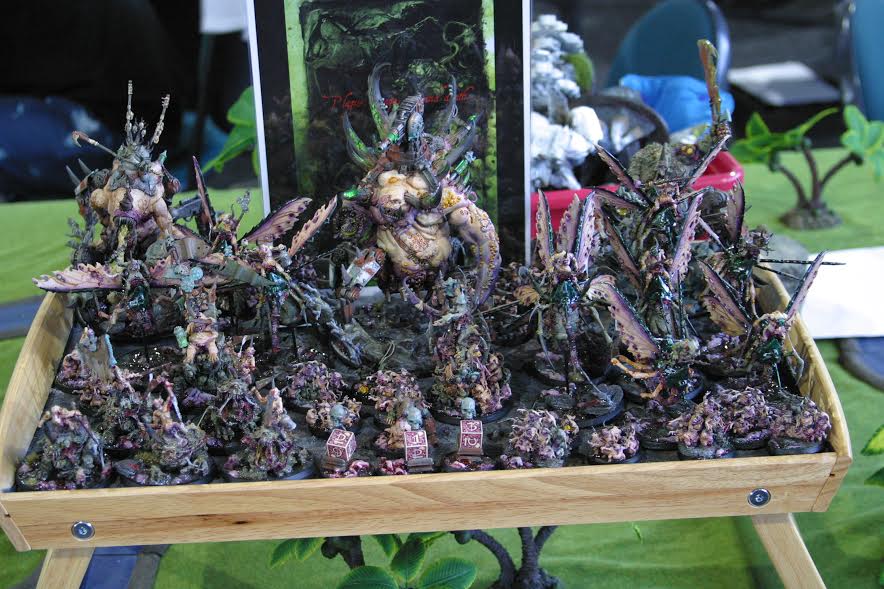 There was plenty on offer in terms of prizes in the form of some spectacular timber Trophies, Hobby Cases, Table Top gaming supplies, Miniatures, and Vouchers from various sponsors, which are the following:

With the contributions from these great Companies sponsoring the event, the prize pool was worth over $2300, which was all given out to the players in attendance. To start with, here’s the Prize Winners of the Australian Warhammer 40K ITC 2016 Championships: 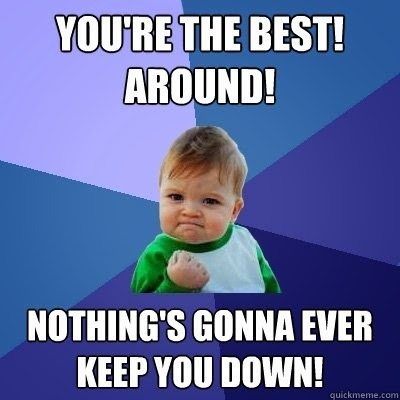 It was very tight with some of the Top Player’s and some faction award as well with quite several upsets to who got awards and such as well, which can happen with the Championship event. We did Live Stream our Award Presentation on my podcast’s (The 2nd Wave Podcast) Facebook page, which you can check out here: https://www.facebook.com/The2ndWaveWP/. You can also check out a comprehensive article of the event from a Player’s perspective done by the guys over at Menza Gaming, which you can check it out here: http://menzagaming.net/cancon-2017-itc-2016-championships-weekend-review/ 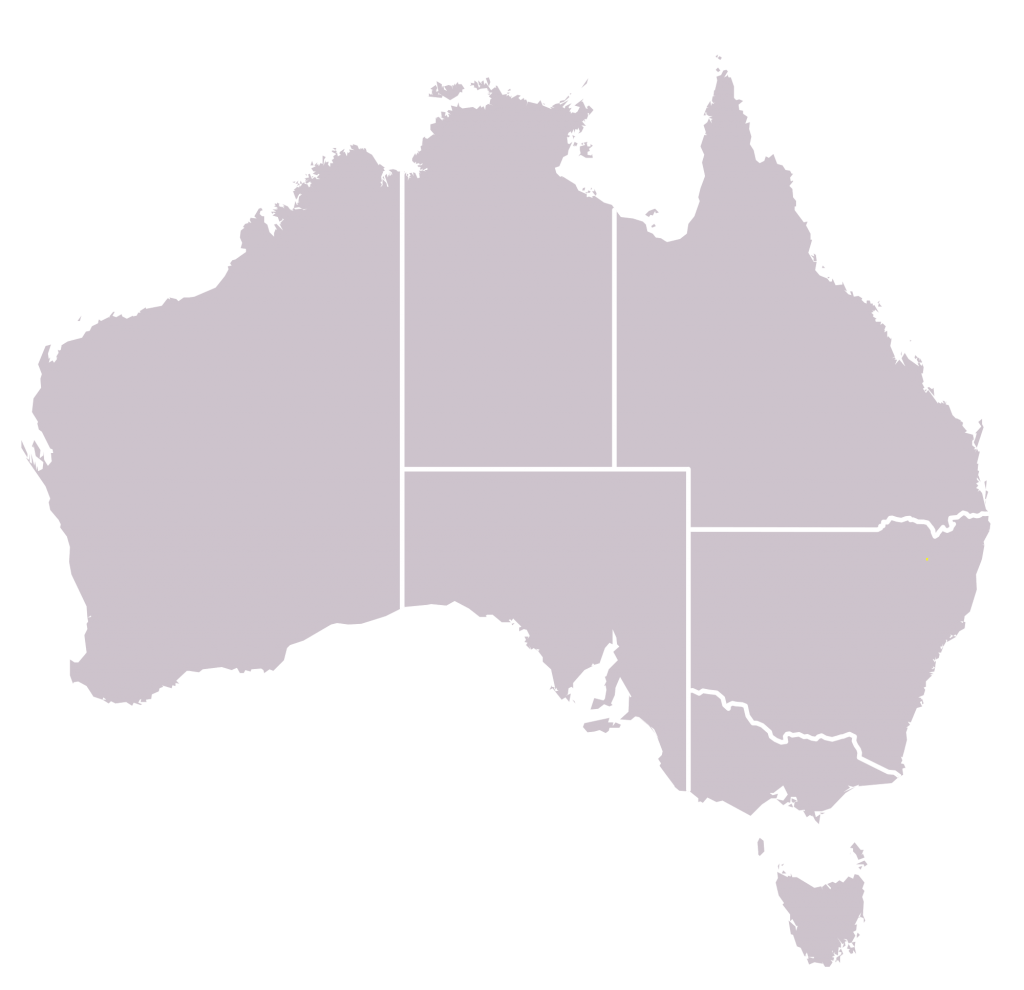 To wrap up the whole TO’s report on the Australian Warhammer 40K ITC 2016 Championships, I’d have to say that it was an awesome event from a TO’s perspective! We had players from almost every state in Australian (WA and Tassie, com’ on guys, get over here next year aye!), and despite some of the issue we ran into, John, Myself and the rest of the Toing Team overcame them to kept on running the event as smoothly as possible for the players, which greatly showed through the thanks and feedback we have gotten from the players for the event. This tournament was the Largest Australian ITC Formatted event and considering we went from 1 event in the 2015 Season, to 20-30 events in the 2016 Season, it’ll continue to grow exponentially in the 2017 ITC Season, which as both a Player and TO is a positive sign to see the Australian 40K scene growing and thriving once again. Make sure you check out my Podcast, The 2nd Wave Podcast, and give us a Like on Facebook and Subscribe on iTunes (The 2nd Wave Warhammer 40K Podcast) as I’ll be doing plenty of coverage of the Australian ITC Season for 2017. Just want to throw a massive shout out to the Frontline Gaming guys for giving me the opportunity to do this article and I look forward to speaking to you in the future.

← Please vote for Frontline Gaming in this competition! (Last day day to vote)
Tactical Terrain: Secret of the Flock →