Come on down to Honest Grixulab’s Discount Alien Warehouse, where we’ve got weirdos and xenos of all shapes and sizes for rock-bottom prices! Click to read on, or check out the Tactics Corner for more reviews and strategies. 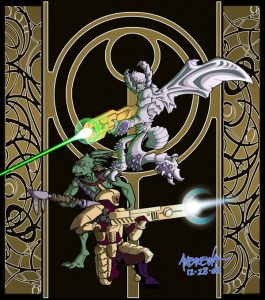 The Allied Advance Cadre (not to be confused with the Advanced Allies Cadre, or Cadre of Advancing Alliances) is one of the lesser-known formations in the Tau codex; indeed, nothing about it is likely to jump out at you as a “wow” moment, but none the less it’s a fairly solid option that can significantly improve all of its component units while having fairly minimal taxes involved.

The formation consists of four units of Kroot Carnivores and two units of Vespid Stingwings; the units can be of any size and composition desired, so I typically cleave close to my standard setup for both (13 or 17 models for Kroot, minimum size for Vespid.) 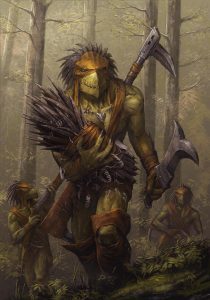 Although it’s hard to say that the formation really ever “shines,” if anywhere the bundle of special rules is certainly its top feature. Essentially acting as a “networking” formation, it shares the benefits of both units to their other half as well as giving them some small additional bonuses to represent their cooperation.

The Vespid’s bonuses, unfortunately, are the smaller of the two- though still not insignificant. Just like the Kroot, they have the Infiltrate and Stealth (Forests) special rules, allowing them to not only keep pace with their lesser brethren as well as giving them another option for keeping themselves protected. (As you’ll recall, Vespid already have Stealth [Ruins] built in, as well as Move Through Cover.)

The bonuses for Kroot are more powerful, though with a catch- in order to get them, the Kroot have to stay within 12″ of the Vespid. This isn’t exceptionally difficult to do, since the Vespid are fast and can Infiltrate along with the Kroot. However, as both units can be a touch fragile, it’s entirely possible for the enemy to wipe out the Vespid first in order to deny the rest of the formation its benefits, which can be problematic. Still, for all that it’s still not bad; when in range of their alien pals the Kroot upgrade their Stealth (Forests) to Shrouded (Forests), a rule that technically doesn’t exist but is pretty easy to intuit what it’s intended to do. More relevantly, they also get +1 Ballistic Skill, bringing them up to a much more respectable firepower output- especially when further enhanced with Markerlights or other bonuses.

Last but not least, all units in the formation have the Supporting Fire special rule, but can only use it to protect other models from the formation. This isn’t particularly huge, but like Supporting Fire itself it will occasionally stop a charge cold when you get lucky- the AP3 and Sniper weapons in particular have good odds of dissuading even many of the larger targets out there from making 11″ and 12″ charges on your units just out of boredom. 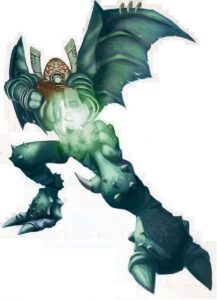 So, what do we do with this? If you’re taking the Allied Advance, you’re probably not doing so as a standalone formation- that would mean giving up Objective Secured on the Kroot, which is a pretty big loss. So you’re probably dipping into a Hunter Contingent or Dawn Blade Cadre and running it as an auxiliary option, which will flavor how we want to use it.

As noted earlier, we really need to be keeping the Kroot and Vespid near each other if we want to be getting our full bonuses, and that means keeping the Vespid alive. Our 12″ range is actually pretty forgiving, especially because we’ll likely be taking larger units of Kroot that we can spread out where needed, so a lot of the time the Vespid will essentially be playing peekaboo: hiding behind some blocking terrain to stay in range of the Kroot most of the game, and then jumping out to put some damage on a unit of MEQs or the like late in the game.

One big advantage is that the Vespid are a lot more survivable than you might expect, so long as they keep to cover- you have Stealth for two of the three most common terrain types out there (forests and ruins, with hills being the missing one) so chances are very good you’re getting a 4+ or 3+ cover save, and if you Go to Ground (as you will probably need to) you can increase that even further. T4 and 4+ armor also help, since even most Ignores Cover weapons won’t cut through you and you aren’t taking excessive numbers of wounds from weaker weapons like Lasguns.

The Kroot, meanwhile, really want to be finding a forest to hide in or at least tag with one toe- remember, even just a single model being in a forest for Shrouded will benefit the whole unit. With their enhanced BS and Infiltrate, I find that it’s worthwhile to take not just the Sniper upgrade on them but also mix in a Krootox as well; those S7 shots into side armor (or against high-toughness targets) can be pretty valuable, and every once in a while you’ll be able to make use of those S6 melee attacks as well. As always, a solo Kroot Hound to help with Outflanking and Sweeping Advance is also very helpful.

The biggest problem with the formation is that it doesn’t really serve any specific purpose in a list- as Kroot are a troop unit, they don’t have a strongly-defined role on the battlefield and tend to just kinda hang around taking potshots at things. While that +1BS certainly makes your potshots a lore more effective, they still aren’t going to be ruling the battlefield, and as the whole thing is a non-trivial amount of points that is a bit of a problem.

Both of the Tau decurions provide excellent benefits to the Allied Advance Cadre; Combined Firepower can really put the hurt on a target with BS5 sniper weapons, especially if you keep the squad size small so that you’re not wasting shots. Coincidentally, the formation as a whole is the perfect size to do two Combines (i.e. six units) against a pair of different targets. The Dawn Blade bonus is arguably even better for them, since rerolls to wound let you fish for Rending hits with your snipers and can turn them into emergency backup tank killers as well. However, as both detachments can easily access Kroot (and Vespid, if it comes to that) via their core detachment, the incentive to take an Allied Advance is rather low overall- nothing that it does is exceptional or impossible to replicate through other means. 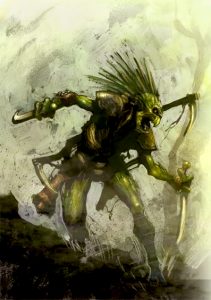 The Allied Advance Cadre is far from a bad formation; if you like Kroot and want to slip some into a list, there are a lot worse ways you could do so. However, it does suffer a bit from being a rather bland choice overall, all the more so because it’s largely composed of troop units. Tau’s basic infantry, like those of many factions, just don’t cut the mustard in a competitive meta and so formations composed of them are pretty unlikely to do so either unless there’s something exceptional going on, and there really just isn’t in this case.

Remember, you can always get GW products and more at up to 25% off at the Frontline Gaming store.