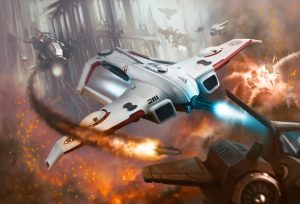 Up until here, my review of the Tau book has been pretty positive- there are a lot of good units in the Tau codex, and while many of them may not get seen at tournaments much that doesn’t mean they are completely useless, or even particularly subpar. However, even the Tau have their stinkers and the time has come to start addressing them, starting with the Sun Shark Bomber.

The Sun Shark was released in early 6E with the new Tau codex, alongside the Riptide and several other new features, but boy it does not measure up. Worse yet, it has suffered significantly from the changes of 6E to 7E, as the vehicle itself didn’t really change at all (like most of the “updated” Tau codex.) But the real problem is more fundamental than that: it’s just got a bad statline to start with, which means that it’s looking at disadvantages in multiple different areas and multiple different ways right out of the gates.

The Sun Shark is relatively mid-range for a flyer, coming in at 160pts, but for that price tag you get an extremely weak profile- AV11/10/10 is only barely better than the paper airplanes that the many stripes of Eldar get, but with the added disadvantage of only being BS3 to boot. (This is particularly odd because the Hammerhead/Skyray have BS4, as do many of the Forge World aircraft.) It does come with three HP at least, but this is very little consolation when even Bolters have a shot at doing damage to you. If you’re using Death from the Skies, the Sun Shark is also stuck with what is by far the worst role (bomber) and a very mediocre  Agility 2. 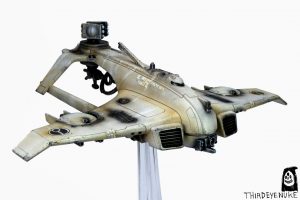 But I mean it’s a Tau vehicle, right? So it makes up for it with its armament, right?

Unfortunately, it does not. The Sun Shark comes with a Missile Pod on a turret (which can be upgraded to twin-linked for a token price) as well as a Networked Markerlight and two Seeker Missiles; beyond that, it carries a Pulse Bomb Generator and the two Interceptor Drones.

The Pulse Bomb Generator sounds like it could be good, but it’s not- it’s a S5 AP5 large blast (because Tau were really hurting for those S5 weapons, right?) that keeps regenerating on a 2+ each time you use it. Now, that sounds impressive when you put it that way (you almost always get it back!), but really you should be thinking about the weapon the other way around- roll a die every time you shoot it, and on a ‘1’ you lose the weapon for the rest of the game. That… doesn’t sound so good. Most of the other Bomb-type weapons in the game are single-use because they have a strong profile and can do a lot of damage in that one pass; the Pulse Bomb is really just a shitty gun that fires into your rear arc and has extra limitations about how it gets used.

The Interceptor Drones are even worse, however. Like all drones, they start embarked on the vehicle and can shoot out from it while they stay attached; unlike most drones (and other passengers), they have special permission to disembark at any point during the vehicle’s movement if you so please while still allowing it to continue on with things. So that part is neat. What isn’t so neat is the fact that they come with Skyfire (and Interceptor) stock- this means that they can never use the blast mode on their Ion Rifles (which are otherwise S7 AP4 Rapid Fire) and will be forced to make snap shots at virtually every target around. They also will be forced to snap shoot any time the Sun Shark moves more than 18″ in a turn (i.e. its combat speed), which further limits their firepower. And remember: the drones have to shoot the same target as their vehicle does, so you can’t even do any cute split-fire shenanigans to make better use of them.

So what you have is a vehicle that is putting out two S7 shots at BS3 and two S7 shots at BS1 most of the time, plus a single S5 bomb. That is not very good for any faction, much less for Tau who are supposed to rely on their superior firepower. Even the Skyfiring Markerlight doesn’t really do much to mitigate this weak performance, since the chances of hitting with it are not particularly good. Like most bombers in the game, the Sun Shark just has incredibly weak damage output for its cost.

The one high point for the unit is the vehicle options it can select from; most all of them are good buys for it, or at least better buys than they are for regular Tau vehicles. The Decoy Launcher, at 3pts, is particularly notable since it gives you a 4++ save against any weapons with the Interceptor rule. Note that this applies even if the weapons don’t make an Intercept attack- so all of those enemy Tau suits taking 5pt upgrades like a chump are suddenly giving you a free save. The Disruption Pod is a lot more expensive at 15pts, but gives you a flat +1 cover save; nice when Jinking and nice just in general, though it does feel a bit pricey on such a fragile unit. The Automated Repair System lets you try and undo the loss of a weapon, but since it can’t restore your Pulse Bomb when it runs out it probably won’t be all that relevant. 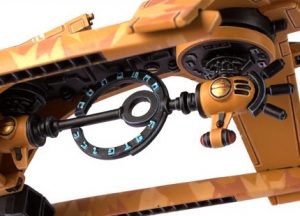 The best use for the Sun Shark is really simple: convert it into one of the Forge World airplanes like a Barracuda variant. No, really- as much as I’d like to say something charitable about it here, there is basically no reason for the Sun Shark to exist in a world where the Razorshark (itself a mediocre vehicle) and Barracuda AX-5-2 are both available. It’s hard to even characterize its performance as “mediocre,” since other vehicles with pretty much the same price do the job infinitely better, and that’s not to even mention the huge variety of actual good units the Tau have access to.

The only positive thing you can really say about the Sun Shark is that it is able to engage two different targets at once via dropping a bomb and then shooting at something different. This isn’t exactly an astounding ability in a faction that can get Target Locks all over the place, but it does at least count for a very small something- in an ideal perfect world, you would get to fly over a mass of infantry and drop a bomb onto them then fire your guns into an enemy airplane to try and shoot it down. And that is one other small factor in the Sun Shark’s favor- its guns (and drones) all have wide arcs of fire, allowing you pretty free targeting at things almost no matter where they are on the battlefield. It’s not a lot, but when you’re scraping the bottom of the barrel like this you take anything you can get.

I’m being pretty hard on the Sun Shark here, but it really deserves it- it’s an incredibly poorly-designed chassis that doesn’t really do anything well. Airplanes normally excel at survivability, so what you typically have with any flying platform is something that will stay in for most or all of the game putting firepower on various targets. But the bomber’s weak armor values combined with unimpressive firepower leave even that role out of its reach; unlike a Stormraven or Vendetta, you aren’t tough enough to ignore the random S4-6 shots that might come your way and unlike a Hemlock or Razorwing, you don’t put down enough firepower to actually make the enemy have to deal with you. The Sun Shark is a great big target with “FREE KILLS HERE” stamped on the side and that’s about it; you could get similar survivability and better firepower out of any of a half-dozen different platforms within the faction, to say nothing of going outside it.

The Sun Shark is available in a number of different formations, probably far more than it really deserves- you can take it as a “FA” choice in a Hunter Contingent as well as the Air Caste Support Cadre, which actually has two different versions (though the DftS version is just straight-up worse than the one published in the codex.) Nothing in either formation is really good enough to redeem the chassis, though, so you’re not any more likely to see them fielded in that way.

I can’t with any honesty say that the Sun Shark comes anywhere near a “worst unit in the game” title- while it may be resoundingly mediocre and arguably even bad, it can’t measure up to all-stars like the Pyrovore or Penitent Engine. It’s worst crime is to be an unexciting unit in a codex full of above-average or good ones; taken within the context of the whole of the game it might not be that awful, but when lined up against the other Tau units its sins look much more egregious. So if you’re absolutely desperate to run one, you can go ahead and do so- it at least won’t hurt you, most of the time, but understand that almost anything else in the book (including Vespid) would probably be better.