Is the Space Pope reptilian? One faction’s weird trick, and what happens next will shock you! 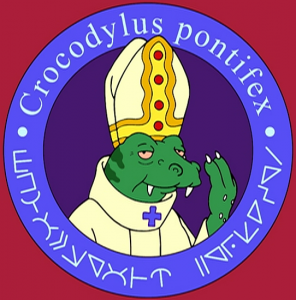 Aun’va is the head honcho of all Ethereals, the veritable King Mister Fancy Pants of the whole Tau race. He and his two slabs of beefcake (seriously, look at the uniforms he makes them wear- they’re like one nipple tassel away from a Chippendales dancer) will on some occasions show up to lend moral support to a Tau army, doing what Ethereals do best, i.e. handing out buffs to all your good units while being a walking liability to your army.

Aun’va’s unit consist of himself and two bodyguards, and unlike other Ethereals they always act independently and can never join other units. Aun’va himself has a pretty miserable statline- WS, I, and A of just one pip each with only S2 and T3, pretty much what you’d expect from the oldest, most crochety geezer in the whole race. However, he does have four wounds at least, so as long as you can stop him from getting pulped by S6+ weapons he can be surprisingly durable. His Honor Guard have a somewhat better set of numbers, with WS/BS4, S/T3, and A/I3 as well as a pair of wounds each. All members of the squad come with 5+ armor and Ld10. Coming in at 100pts, the Aun’va crew is fairly cheap for a named character and not that much more than a stock Ethereal. 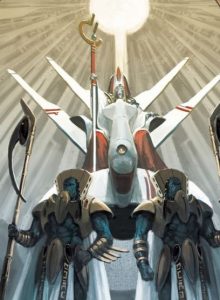 Like most support characters, this is where the real meat of the unit is. Aun’va is Stubborn like all Ethereals (though this barely matters, since he can’t join other units) and is Very Bulky should you decide he needs to get inside a building, but neither of these are what’s selling you on him. The real reason to be using Aun’va is to turbocharge the powers of a regular Ethereal, and in that respect he does quite well- his Invocation of the Elements gets to pick two abilities each time. Though there’s typically one of the Invocations that will be obviously better than the others, getting to sustain the 6+ FNP while also putting out another ability (since that’s inevitably what you’ll be using) is pretty handy.

But that’s not the only aspect where he offers an advantage over his lesser cousins; he also puts out the usual 12″ morale bubble of an Ethereal while simultaneously letting you reroll all failed Morale/Pinning/Fear/Regroup checks for all your Tau models on the table. The table-wide nature of the bonus is clutch, because it means you aren’t beholden to staying clustered in one section of the battlefield in order to make use of it. Also very important is that the bonus applies so long as Aun’va is alive- he doesn’t even need to be on the battlefield, so it will function when he is hiding in reserves or stuck inside a building, an important distinction from his other abilities. (Note that unlike previous editions, there is no special penalty beyond the usual if Aun’va is slain.)

His last ability is perhaps the most interesting, if not always necessarily the most useful. His Paradox of Duality gives him a special “bonus” save against any shooting attacks that strike the unit; you roll a d6 and if the result is equal to or higher than the AP value of the attack, the wound is negated. As per the item’s own text, this means that AP1 attacks will always fail against Aun’va and those with no AP value cannot be negated in this manner. This gives the unit a bit more durability than might otherwise be expected given their weak statline, but in an age of massed high-AP firepower it really can’t be counted on to keep him alive against sustained shooting.

Aun’va comes with Exemplar of the Selfless Cause warlord trait fixed, which allows all Tau units to stand up from Gone to Ground status once per game. As it’s one of the best traits on the table this can really only be considered a plus, though some Tau armies will have trouble making use of it. 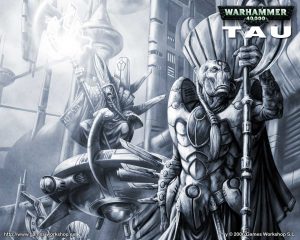 Although Aun’va is no longer the stone around a Tau army’s neck he was in some previous editions, neither is he a particularly great character- his inability to join units is pretty damning, since that is typically how Ethereals stay alive. Moreover, the recent GW FAQs that explicitly prohibited using any kind of auras from inside a vehicle or building hurt him even more, since that was really the only safe place for him otherwise. Nowadays if you want to get any mileage out of the Space Pope he’s gotta sit on the table where he is pretty vulnerable; hiding behind terrain can get you some protection, but it’s hardly infallible and it will limit how you can position him.

So what do you want him for, anyways? It really comes back around to the morale thing, really- if you want a double Invocation bonus you can just take two Ethereals and run them side-by-side, but his ability to hand out a universal reroll on Leadership is something you can’t find anywhere else and for an army like Tau that often struggles with morale checks it can be a godsend, especially if you’re running lots of squads on foot. Aun’va can do a pretty alright job of solidifying a gunline to ensure they stay in place. While the Leadership 10 from a normal Ethereal is certainly good and will hold most of the time, than 9% chance you fail it is still unpleasantly high and often enough you’ll find that some of your units are out of range of it anyways. Rerolls are always invaluable for any unit and especially so on something clutch like Leadership checks; even those measly Ld7 and Ld8 in your army will find themselves sticking around the vast majority of the time when you get two tries to succeed on every roll.

The army that this will work best in is likely something like a gunline that is running lots of units of Crisis, Broadsides, Strike Teams, and Pathfinders- basically, units of guys on foot that want to be holding in formation and shooting away and come in units big enough that morale checks are potentially a thing that can happen. This has the double benefit of also making good use of Aun’va’s warlord trait, which gives your units a lot more survivability.

Aun’va is available in the Hunter Contingent as a Headquarters selection, where he can do a reasonable job of supporting things, even if he has no specific synergies with that army in particular. He does, however, have an interesting interaction with one other Tau choice- specifically, the Tidewall Shieldline fortification. Aun’va’s Paradox of Duality notes that it negates the wound “exactly as if the unit had passed a cover save,” and the Shieldline’s ability to reflect shots similarly triggers off of successful cover saves- so you’ve got a bonus chance to bounce back attacks at the enemy with him, giving them a disincentive to puts shots into him. It’s not a game-breaking combo, but it can be a cute trick and a way to offer him a bit of extra protection to keep him alive that much longer. 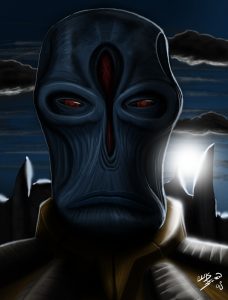 Like most of the Tau named characters Aun’va isn’t hugely impressive, but neither is he completely awful. He’s cheap enough that you can put him into an army without breaking the bank and functional enough that he can do something unique and useful for an army without inspiring furious nerd rage in your opponents. Plus, he’s a Space Pope on a flying hoverchair with two exotic danger bodyguards- that’s gotta be worth something.

Remember, Frontline Gaming offers up to 25% off on Games Workshop products every day, whether you’re looking to start a new army or fill out an existing one.