Hey, everyone. Chandler here with a look at the new blue Beastmen of Tzeentch for Warhammer 40k from the Wrath of Magnus and Traitor Legions supplements, the Tzaangors.  For more battle reports, tactics, and analysis check out the Tactics Corner.

Tzaangors are Tzeentchian mutated beast-men who follow in the service of the master of change and his arcane sorcerers.  They are pursuers of knowledge primarily focusing on the collection of ancient artefacts and relics.  Along with being pretty sweet looking models, they also come with some pretty decent rules, giving Thousand Sons players some cheap bodies to hide their Exalted Sorcerers within. 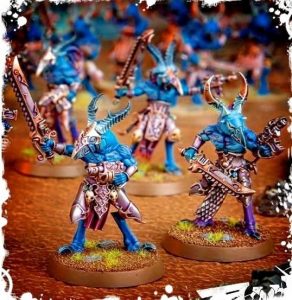 Tzaangors don’t really seem like anything special at first glance. A cheap Mark of Tzeentch unit akin to Chaos Cultists.  In fact, with the presence of Cultists in the Chaos Space Marines Codex, they hardly seem like a necessary addition at all really.  For 70 points, however, you get a unit that is slightly better statwise than a Cultist unit.  They have mostly the same statline as a Chaos Cultist only their Weapon Skill and Toughness are both 4, which doesn’t seem like a big deal, but goes a long way in helping keep them alive for a round or two of shooting, especially when they are clinging to cover.  They also come stock with two close combat weapons, giving each one of them two attacks, which at WS4, isn’t half bad considering their points.  They come with a miniscule Leadership 7, however so it’s not a bad idea to upgrade one to a Twistbray to get to Leadership 8, unless you plan on throwing an Exalted Sorcerer, or some other Fearless or high leadership character with them.  Additionally you can field these guys in blobs of up to 30 in a squad, each for 7 points per model.

As mentioned above, they come stock with two close combat weapons, but for 1 point per model can replace these for a chainsword and auto-pistol.  Unfortunately these are their only wargear options which really limits their effectiveness quite a bit.

Tzaangors come with two special rules of note, the Mark of Tzeentch, giving them a 6++ Invulnerable Save (as they have none without it), and the Relic Hunters rule.  Relic Hunters allows you to re-roll failed To-Hit rolls in close combat against enemy models equipped with a relic (or equivalent).  While that’s a pretty interesting special rule, and certainly entertains their fluff, it’s not all that appealing considering it is a model-to-model basis, which means only those Tzaangors actually engaged with a character holding a relic can make use of it. Still being WS 4 does help, as they’ll hit most things they might face on 4s in combat.  Because their Strength is only 3, it also helps give more dice to roll to hopefully sneak some more wounds in as well. 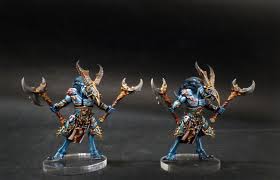 Tzaangors are an interesting unit, if for no other reason than their aesthetic look really, but they do have some limitations that make them less appealing than your standard Chaos Cultist.  First off, consider if you actually purchase auto-pistols for Tzaangors (something Cultists come stock with) then you’re at 80 points.  Add in a Twistbray on top of that and you’re at 90 points. Nearly 100 points for a Leadership 8 unit with a 6++ isn’t that great when you consider a Cultist has the same leadership and wargear, for 30 points cheaper with a Mark of Tzeentch. Sure, Tzaangors have the added benefit of being WS and T4, but is that worth 30 points per squad over Cultists? Probably not.  If you’re just looking for some cheap obsec units in a CAD to hold down objectives in cover, then you’re better off sticking with the ol’ faithful Chaos Cultists.

That being said, because they are T4 they make great ablative wounds for units that can do some real damage like Exalted Sorcerers.  Considering Exalted Sorcerers are also Fearless, you won’t have to worry about the Tzaangors running away either when they are attached.  They won’t get a benefit from Blessing of Tzeentch as they don’t have Veterans of the Long War, however so without some help from psychic powers, they won’t get any better saves.  Endurance is a nice power to cast as a defense because they are T4 it means that most of the time they’ll get that 4+ Feel No Pain roll, which can go a long way in keeping your Exalted Sorcerer’s meat shields in the fight and on the table.  Honestly, this is probably the better way to utilize them if you plan on running them in Thousand Sons Combined Arms Detachments, or using the Tzaangor Warherd Formation. 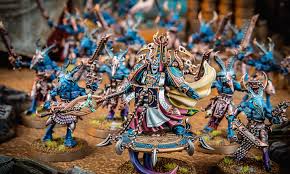 The biggest drawback to running a Grand Coven Detachment is the fact that the Tzaangor Warherd Formation is not a Core choice for the Detachment. Instead, you have to spend a lot of points on either of the other choices, not leaving you much room for the inclusion of the Warherd, as the Formation without any upgrades at all comes in at 370 points. Yes, that is a lot of bodies on the table, and the Formation gives you some nice special rules such as Fleet and the ability to Run and Charge in the same turn, but the main issue is that the Grand Coven has very little that can deal with armor values, thus the Auxiliary slots will often be filled with some heavy hitting units like Maulerfiends or Chaos Predators with Lascannons.

Personally, I find the best way to use these guys is just stock 70 points as compulsory Troops units in a CAD as meatshields for the Exalted Sorcerer.  They gain obsec which can become a pretty significant threat with the Sorcerer attached, and it gives your Exalted Sorcerer some wounds to plow through so he can get up the field and unleash Psychic hell.  You can get the same effect using Cultists, but because of T3, the Cultists are not the best option in that role.  Another bonus in a Thousand Sons CAD is that, while more expensive than their Cultist counterparts, Tzaangors are still a fairly cheap Troops choice, which in an army inflated with high-cost units, can be a huge mitigating factor. Throwing down 2 or 3 of these units each with an Exalted Sorcerer attached, gives you a good amount of options and board control letting the Exalted Sorcerers move up the table and deal the real damage in the Psychic Phase.

The only real drawback to the whole “meatshield” tactic, is that because they come with the Mark of Tzeentch, you’re limited in what Independent Characters you can attach to them.  Only other Mark of Tzeentch units can go with them, leaving you with the option for say a Bike Lord with Seer’s Bane, or the aforementioned Sorcerers.

Overall, I think Tzaangors definitely have their uses, but are they worth investing in? I’d say if your plan is to build a Grand Coven then no, absolutely not. If you want to run Thousand Sons CADs and need a decent and cheap escort for your Sorcerers, then they can be pretty decent options.