Beginner’s Guide to Convergence of Cyriss

You are here: Home › Tactics › Warmachine › Beginner’s Guide to Convergence of Cyriss

Do you like Warmachine, but look at the Warjacks of other factions and say “These guys are WAY to simple to play”! Boy have I got a faction for you! Oh yea and the CoC jokes just keep coming!Check the Tactics Corner for more great articles!

Hey guys, this week we’re gonna talk about CoC! Why talk about CoC you ask? Well maybe I like jokes about flopping my CoC on the table (and I do, I really do), but… they’re a really interesting ‘Jack focused faction! Let’s dive in. 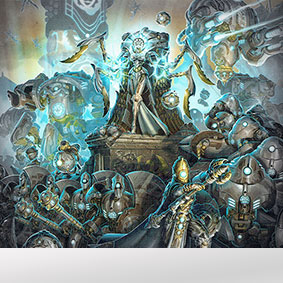 From a playstyle point of view, CoC is a pretty unique faction. None of the vectors, what CoC calls its ‘Jacks, have cortexes, so no free power up focus. To make up for this, they have induction, which allows for a ‘flow’ of focus from one ‘Jack to another throughout the turn. And second, the ‘Jacks don’t have mat and rat scores, they adopt those stats of their warcasters.

What this sums up to is CoC playing each turn like you are assembling a Rube Goldberg to ensure that you can use your focus to maximum efficiency. In general, CoC will play a very ‘Jack heavy playstyle. 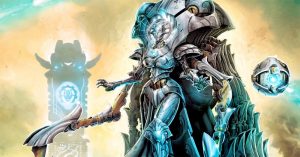 Many of the buffs which the warcasters have are very battle group centric, and as of such we’ll be concentrating on that paradigm. Maybe in the future I’ll know a CoC player who fields infantry, and can pry some knowledge out of his brain for you guys! 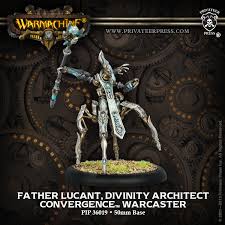 First up is Father Lucant, Divinity Architect, an oldy but a goody. Notably he has field marshal shield guard, deceleration, positive charge, and watcher. Deceleration gives an armor buff to friendly faction models in his control area, positive charge is a melee to hit and damage buff to a warjack and friendly models close around it, and watcher lets you move a ‘Jack on your opponent’s turn if they end their movement too close to Lucant. His feat, Clockwork Reinforcement, is an armor buff to all friendly faction models in his control range, along with a buff to repair rolls. Between his feat, shield guard, and deceleration, his army can take quite a bit of damage. They also have the ability to move that damage around to ensure your opponent doesn’t get to kill what they want to, meaning Lucant’s battle plans are much tougher to derail than those of other CoC lists. His one hit and damage buff, positive charge is very powerful. With a couple positive charged ‘jacks and what’s left of your army hitting your opponent’s soft bits, you can definitely take a massive chunk out of most opponents’ armies.

Lucant plays an ‘honest game’ as in he walks right into his opponent’s best right hook, takes it like a champ, and closes in for the kill. Its simple, it works well, and it’s dang scary! 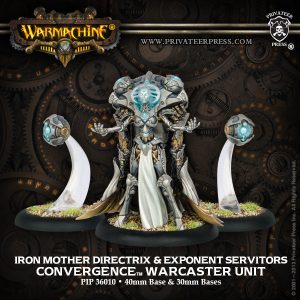 Up next is Iron Mother Directorix, or iron mom. She has, notably, ‘exponent servitors’ which give a damage buff against things they hit with their aperture beams, field marshal arc node, backlash, domination, fire group, and tactical supremacy. Backlash is a spell stolen from Skarre 1’s card, which makes your opponent’s warcaster take damage every time the hit warjack is hit. This allows for very wonky assassination vectors.  Domination takes control of an opponent’s warjack allowing it to make a full advance and a basic attack, this spell is downright scary because you can now mess with your opponent’s plans, kill their models, and even enable assassination vectors which would never otherwise be possible. Fire group is a range buff to her battle group, simple but very scary, solidifying her status as gunline supreme within CoC. Tactical supremacy is a simple spell, the model/unit affected gains reposition 3, simple but it can allow for a unit to go in, hit an opponent’s jack, pull out, and allow another unit to do so. This enables some fun assassination runs.

If you didn’t notice, iron mom does not fight an ‘honest fight’, she uses a combination of harsh ranged game, spell slinging, and some light control elements to ensure your opponent is always waiting for some crazy assassination vector to pop up.

The Mom and Dad pairing is what I generally see, and it works quite well, they complement each other quite well, and since CoC is not a very popular faction, many opponents don’t have a plan coming into this kind of pairing, which is always a good place to be for the CoC player. 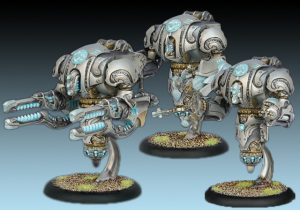 CoC has a ton of very unique ‘Jacks, or ‘vectors’. Most have a gun, which invariably causes some esoteric effect from throwing ‘microswarm’ barrages to having homing spikes with beacons on them to buff friendlies charging the target. Some of them look like spider walkers, some of them float in the air, some of them fling… ellipsaws? Yea, they have some unique jacks, and as of such are very confusing for non CoC players. 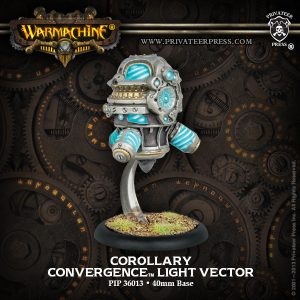 As of such, my choice for their ‘jack to look at is the corollary. Yes I know, there are much shinier toys in the CoC’s toolbox, but this guy is *THE* toolbox that almost every CoC list has in it.

Now this doesn’t sound like much, but did I tell you that CoC builds a Rube Goldberg machine each turn for its game plan? Well this guy makes everything a little less painful to set up. If you set up a ‘Jack too far to induct to another ‘jack, you can salvage your plan using the stored, or free, focus from the corollary. If you really want to make your battlegroup efficient, you can move the same focus from your last turn, through all of your ‘Jacks and right back to the corollary to allow your warcaster to keep their full stack and still have focus to allocate.

In short if you are playing against CoC, kill the corollary first. 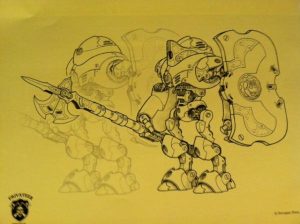 The infantry of CoC are generally priest/engineers who revere the machines which the build and maintain as one would treat a shrine to one’s God. While other units are clockwork angels capable of flight, shooting ‘binomial beams’, or the hardy reciprocators who have a load of boxes, with high mat, and the ability to really take a punch between shield wall, and the ability to give themselves set defence, making it harder to land charge attacks on them. 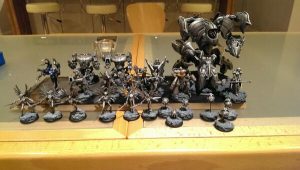 CoC is not just a bunch of ‘Jacks, but most people do in fact mostly play the faction for those ‘Jacks, and I don’t blame them. Especially with how well the faction repairs, buffs, and generally utilizes these guys, why would you field anything else?

Well that’s it for this week, next week we look at Mercenaries! How am I gonna get that into one post?

Posted on February 19, 2017 by BigVik in Tactics, Warmachine

2 Responses to “Beginner’s Guide to Convergence of Cyriss”