Broadsides and Pathfinders, working together- it’s the wacky buddy-cop comedy of the 40K world. 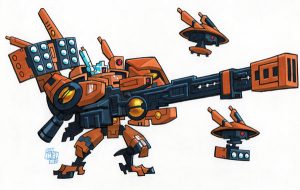 Broadsides and Pathfinders; you’d be hard-pressed to find two more diametrically opposed units in the Tau codex. (Perhaps Vespid and Stormsurges?) On the one hand, you have the epitome of Tau firepower efficiency with eight twin-linked shots coming off a single model, all with an above-average statline and special rules. On the other, you have T3/5+ infantry with no real protection at all and weapons that force them to stay static while being guaranteed to be any competent general’s first target to get rid of; even their own codex entry admits that Pathfinders are pretty much doomed to die straight away.

The Ranged Support Cadre, however, manages to combine the two together in a way that makes them both effective without fundamentally rewriting the rules for either. It’s a powerful formation that hasn’t gotten a lot of attention so far, but with Paul McKelvy taking a top slot at TSHFT using it and other Tau players starting to take an interest, I feel like it’s poised to break into the general meta in the near future if LVO doesn’t completely shake things up. 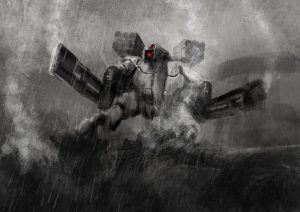 The basic setup for the formation is pretty forgiving: three units each of Pathfinders and Broadsides, in any configuration. Although it’s featured in the Farsight Enclaves book, it is not required to be a Farsight detachment (unless you take in a Dawn Blade Cadre, of course)- though the Broadsides can benefit a lot from Bonding Knives, since they typically run large numbers of Drones in the squads.

The formation features several different special rules that give it a lot of hitting power and synergy within itself. The first, and perhaps most important, is that the formation’s Pathfinders benefit from the Infiltrate, Stealth, and Shrouded rules; however, they lose the latter two if they make any movements (including Scouting) or fire a weapon other than their Markerlights. As Pathfinders typically want to be standing still and lighting up enemies at every opportunity anyways this isn’t really a big limitation at all, and it lets you make sure that your Markerlights are exactly where you want them to be on the battlefield.

Second, the Broadside units in the formation gain double benefit from the Markerlights of the Pathfinders teams; this means that a mere one counter raises them up to BS5 (or BS4 in the case of the drones) and another one will give them Ignores Cover. This is absolutely huge, since it means that even a single hit from the Pathfinders on a target will turn the XV88s into absolute killing machines- it’s especially devastating when shooting flying targets or otherwise snapfiring.

Finally, the Broadsides can use Supporting Fire at any distance for their smaller companions in the formation, provided that they are in weapon range and line of sight. As the Pathfinders are often placed well outside your deployment zone and away from other units, this can be quite handy; a bucketful of twin-linked shots will often discourage people from throwing incidental charges into your units, though it probably won’t stop a dedicated assaulter. 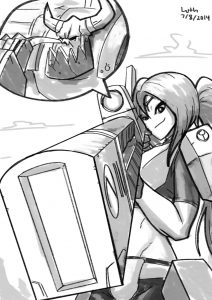 The Ranged Support Cadre does exactly what it says on the label: itlays down a lot of strong firepower at medium ranges and brings its own Markerlight support to ensure maximum efficiency. Obviously the counters placed by the Pathfinders aren’t exclusively for use by the Broadsides, but they typically gain the most use out of it and so are your first pick for doing so. While it can suffer a lot from being fairly static in an environment that strongly favors mobility, few units in the game can compare to the raw efficiency of shooting that Broadsides put out against infantry and light vehicles.

Anyone who’s ever faced Tau before probably knows just how hard those fistfuls of S7 and S5 shots can hit, but it’s worth reiterating because they aren’t as commonly-seen on the battlefield anymore: Broadsides are a gun and a half and very few armies can afford to just sit inside that 30″ bubble and absorb firepower for any length of time. Now add in the additional firepower from a full complement of Missile Drones (which you absolutely should take) and Ballistic Skill bonuses in abundance and you suddenly have a unit that is putting ~20 hits that wound on 3s/2s onto an enemy target every turn- and god help you if you are a vehicle, because anything below AV13 will quickly go down in flames to the barrage of heavy shots. 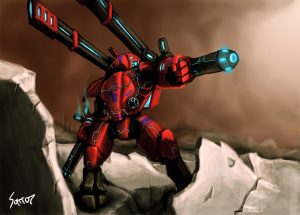 The Pathfinders are no slouch, either, since that +3 to all cover saves means that they will typically be rocking the same 2+ that the Broadsides usually have. They are still vulnerable to anything with Ignores Cover, of course, but with your multitudinous shooting you should be able to wipe out such units quickly enough to preserve them reasonably well. Keep in mind, however, that they are still just T3 infantry at the end of the day and even basic guns can put a lot more wounds on them than you’d expect. As such, I usually buy them in units of five (or, if you’re feeling spendy, nine) to minimize the chances that they’ll have to take a morale test and bolt off the table. Also, be very careful when putting them down because you will lose your protections if you make any movements, no matter the type or reason- even a pile-in movement in combat or the mandatory move to restore coherency after taking casualties.

As the Broadsides really don’t want to move and the Pathfinders essentially can’t move (unless you want to give up all their bonuses), the formation as a whole ends up being extremely static. Tau certainly have plenty of other units that can fulfill a more mobile role- including most of the other options for the Dawn Blade Cadre- but the Ranged Support itself is not going to be moving around much. Make sure that you have plenty of good forward-moving units to take those midfield/enemy objectives as well as handle the sorts of targets the Broadsides won’t be particularly good at killing; heavy (AV13+) vehicles and MCs (especially those with 2+ armor) are prime contenders here, though quick-moving assault units are another big concern. 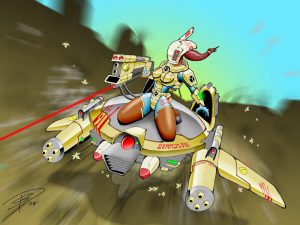 The Ranged Support Cadre is a great formation for bringing a combination of firepower and Markerlights to an army, as it’s one of the few that can do both. Taken accompanying a Combined Arms detachment it can do a pretty good job of of filling gaps in an army (and being able to field up to six units of Broadsides is no laughing matter, either), but it really shines when used in a Dawn Blade Cadre. Broadsides with rerolls to wound and penetrate are absolutely brutal, as anyone who remembers 6th Edition and the old Firebase Support Cadre will tell you; even AV13 vehicles will go down in short order when you point your BS5 Ignores Cover Tank Hunter units at them. Just as importantly, it provides some resilient boots on the ground to go along with the slippery-and-sneaky deployment options from a Retaliation Cadre or the on/off table bouncing of a Firestream Wing.