Attacking AOS – AOS on the Cheap?

You are here: Home › Age of Sigmar › Hobby Blog › Attacking AOS – AOS on the Cheap?

I know a lot of people that have been getting into AOS. As a longitme GW player, I have tried my hands at some Fantasy here and there, getting a big ork and gobilin army together at one point, Bretonnians at another, but the game didn’t stick with me. The bound movement trays pivoting and turning were lost on me and I went back to 40k.

That being said, I enjoy Fantasy themed things and the buzz that is brewing about AOS is interesting. The simplicity and mechanics are getting high praise from tournament players like Dr. Insanatron, The French Overlod, and Ben Captain America Mohlie. 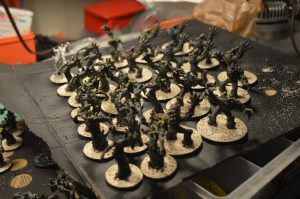 Coupled with that was a set of models that I had been collecting for some time now and have been wanting to use. A long time ago, before 40k, I got into Mage Knight, a fantasy steam punk collectible miniatures game that had some pretty cool sculpts. Their tree themed pieces were pretty cool and some of my favorites. Too bad they sucked in the game and they collected a lot of dust. When I got into 40k I looked at how I could reuse a lot of these minis and turned a bunch of them into zombies and Daemons, but held onto all of my tree themed minis. I even started a Syvlaneth army back when Fantasy was still a thing. I would find little lots of my tree themed guys and pick up some here and there, but it eventually sat in a tub like many of our hobby projects.

Recently, I broke them out, fooled around with Battlescribe and figured out I was actually pretty close to a 2k army with what I had. I picked up a little bit more and now have a full 2k Syvaneth force to use and start some adventuring into AOS. I’m pretty happy with what I have and what I’ve been able to do so far. Lets take a look at what I have and how you might be able to do something similar.

I’ve ended up with only a handful of models, which limits what I can do for the army, but I don’t really care about that. The models I have to work with and their obvious counterpart (at least to me) are as follows: 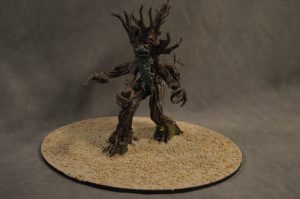 These large lumbering trees look to be perfect for the Treelords. I envision them covered foliage and lumbering across the battlefield 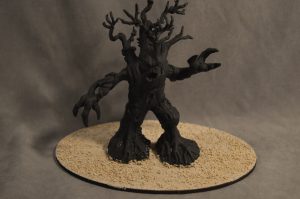 This is by far my favorite MK mini. It is a ton of character and looks great, like a living writhing tree. These will be my Dryads. 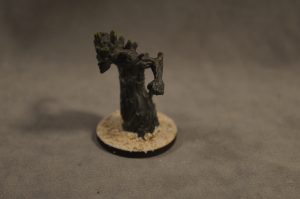 Large and bulky, these seem to fit the Kurnoth to a tree (wakka wakka wakka). I’ll have them all be the same type to limit confusion. 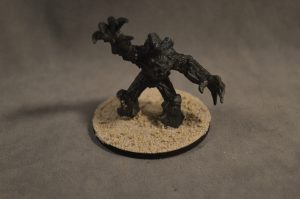 I picked this up a while ago and it will be exactly what it is. 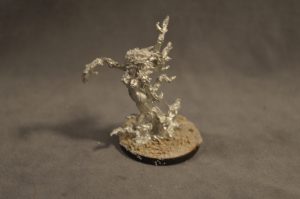 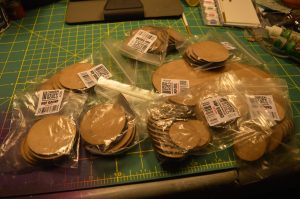 Originally all of my models were on square bases, so the thought of purchasing bases for all those models was daunting, but I found a great resource for regulation sized bases in Green Stuff World. This Spanish company has a bevy of laser cut mdf bases on eBay and through their site. I was able to pick up 60 32mm bases, 2 Large oval bases, and 20 50 mm bases for $28 bucks shipped. They come from Spain, but only still took about a week. Overall it was a great value and I’ve also used them for my Ratsturrection 1st string bases. Check these guys out for some cheap round bases that work great 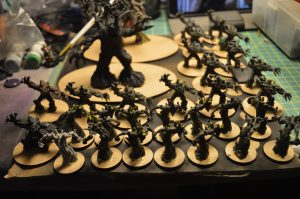 I’m still a bit unsure, but I think I’m going to do a fall theme. Again, from Green Stuff World, they sell a hole puncher that punches out little leaves in all sorts of shapes. They also sell leaf tubs with precut leaves. I purchased a hole punch and plan on doing fall colors for the bases and branches to give that warm orange glow. I think with a good prime spray paint, some airbrushing, drybrushing, and washes will make short work and I should have a fully painted army with minimal effort. Something I am hunting for right now. 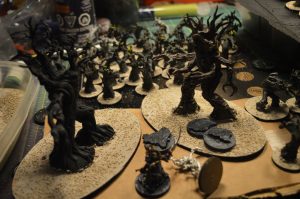 Cheapness is something I often suffer from, but it isn’t necessarily a bad thing. I mean, I can’t take this army to the LVO, as they aren’t GW models. I also can’t go to a GW store for the same reason. Somewhat limiting, but I don’t care. As long as you can get past that you too can get an army together on the cheap.

Most players have armies or models from other systesm already, and fantasy models are pretty easy to come by. You will usually have to miss out on the aesthetics of the new GW models, but I really liked what I had already. You might also know a friend or find a good deal for older used Fantasy models that could port over to the many branches of AOS. One of the great things about AOS is the groupings or factions are much broader and can be combined to make up the force you want. Many used model sellers (hint hint) carry a bunch of older figures that you can mix and match to your delight.

Another great thing about AOS is their great starter boxes from GW. You can build a similar army with starter boxes similar to mind and more competitive for under $200. Hit up FLG for up to 25% off to make that deal even better. You can really make a competitive AOS army for very little cash right now. It’s great. But you could probably do it even cheaper if you hunt for used deals. Lots of options! 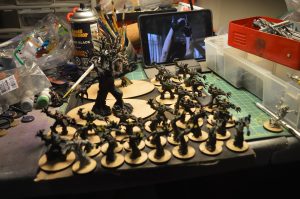 I haven’t even played one game yet and I’m still excited about the project. This has been a long time coming so seeing it all start to form together in one mass of trees is neat. Look around, you might just have the start of an AOS army on your shelves right now or even a complete force that could be put on the table today. Let’s attack AOS!

Posted on January 28, 2017 by CaptainA in Age of Sigmar, Hobby Blog

6 Responses to “Attacking AOS – AOS on the Cheap?”