Ah, how the mighty have fallen. Once the scourge of tournaments across the land, now little more than a footnote in the codex. Click to read on, or check out the Tactics Corner for more reviews and strategies. 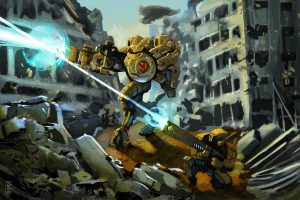 The Firebase Support Cadre- not to be confused with the Cadre Fireblade, or Blade of Cautering Fire, or Cod’s Fire Blade of the Dre- is a fairly basic formation option available to Tau. Its original incarnation was one of the first formations introduced to the game back in 6th edition and was exceedingly powerful in its day due to letting you break the limits of the Force Organization Chart as well as possessing an extremely powerful set of rules combined with the best units from the codex. Nowadays it’s not nearly so absurd, but that is equal parts because of the scaling of power levels in the game as well as changes to the formation itself.

The formation consists of two units of XV88 Broadside suits and one unit of XV104 Riptide suits; they can be equipped however one likes and there are no special limitations on unit sizes. 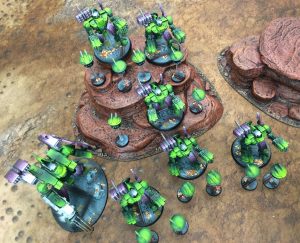 The Firebase Support Cadre doesn’t gain any static rules benefits, but does have an additional shooting option: all of the units in the formation can choose to combine their shooting into a single attack in a similar fashion to the one available through the use of the Coordinated Firepower ability. (Note, however, that these two abilities are different and you cannot take advantage of them both at the same time- you must choose which set of benefits you are getting.) All units in formation must participate and must all shoot at the same target as though they were a single unit, including for purposes of benefiting from Markerlights. If they do so, they gain the Tank Hunter and Monster Hunter rules for the duration of the attack, allowing them to reroll failed penetrations and wounds, respectively.

Even just taken on its constituent units, the Firebase Support Cadre is a pretty decent formation- Broadsides and Riptides are both good-to-excellent units and with absolutely no limitations on how you set them up the formation is extremely flexible and not too unreasonable in terms of the entry price. The Coordinated Firestorm ability is decent, although the limitation of shooting the whole formation at a single unit can be a bit problematic due to the amount of shots you’re putting into that single unit- unless it’s something really big like a Wraithknight or an Imperial Knight, you’re probably gonna end up wasting quite a bit of firepower in doing so. Still, it’s an option you don’t have to use and it can be handy if you absolutely must kill some hard target.

If you’re looking to make much use of Coordinated Firestorm you probably want to minimize the size of the units in the formation; a single Riptide, accompanied by two solo Broadsides with a pair of Missile Drones each is a very solid setup. The Broadsides will want High-Yield Missile Pods, natch, but the Riptide can feasibly be equipped with either Ion (for hunting MCs) or Burst (for taking out vehicles), depending on your needs.

Beyond simply being taken as a stand-alone formation, the Firebase Cadre is also available as a choice in both the Hunter Contingent and Dawn Blade Cadre, the two Tau meta-formations. Both of them are potentially very solid options in their own right, but also have access to Riptides and Broadsides outside of the context of the Firebase, so we need to look at the relative merits of these inclusions in different places.

The Hunter Contingent has the Coordinated Firepower benefit, as already mentioned, which does not stack with the Firebase’s ability to combine shots. As a result, you will have to decide if you would rather get +1BS or rerolls when shooting with the unit as a whole- or fire them all separately, of course. The +1BS can still be useful if firing at a big blob of enemy models (deathstar, horde unit, etc) that you want to maximize damage against, but keep in mind you can always just spend Markerlights for the same benefit, so you’re not getting anything truly unique there. Moreover, the core formation of the Hunter Contingent allows you to take both Riptides and Broadsides on their own, which will then benefit from that formation’s ability to extend Supporting Fire and Run before shooting- both pretty significant. It can also take the auxiliary formation Retaliation Cadre, which again includes both a Riptide and Broadside unit- albeit just one of each. As a result, the Firebase isn’t bad in a Hunter Contingent, it’s mostly just unnecessary; you have tons of other ways to access those units.

A Dawn Blade Cadre is a bit more interesting of a case; it has the same Hunter as a core option as well as the Retaliation Cadre, giving it lots of ways to access both units again. However, the Dawn Blade is usually best taken with the Retaliation core, meaning that it could easily end up wanting to include some additional units of Broadsides and/or Riptides, which is where the Firebase becomes useful. Moreover, the Dawn Blade’s command benefit is actually quite beneficial to the Firebase- it gives you rerolls to wound/penetrate against a single unit each turn, which is generally a lot better than having to commit all your shots in a single go the way the Firebase forces you to do. Since it essentially replicates the “old” Firebase when used in this way, I think that the Dawn Blade is a very solid choice for including the formation into an army- or, indeed, just making use of the Dawn Blade’s abilities in the more general sense.

One interesting thing to remember with the Firebase Cadre is that the usefulness of the Coordinated Firestorm actually goes up as the units in the formation are killed off, which is a bit counterintuitive. It mandates that all models in the formation must participate in the attack, but doesn’t specify any minimum number for this to be possible or to gain the benefits- so even if all you have is a single drone model from the formation left, it can “coordinate” with itself and gain the Tank/Monster Hunter rules when shooting.  When you have the full three units of firepower-heavy squads, putting them all into a single target isn’t an exciting proposition; most likely you’ll waste a lot of shots, as discussed earlier. However, once you start losing models (or units), odds are you’ll be a lot more likely to have a target that is worth firing the entire formation at once at- and if you get down to a single Riptide or whatever, you may as well activate it every turn unless you’re planning to combine attacks with something else. Do remember, however, that you can only use Coordinated Firestorm during your shooting phase, not during Overwatch or Interceptor attacks.

One other option that was more common in the previous incarnation of the formation is to include the Firebase Support Cadre in a non-Tau army, allying it in to something else like CSM, Eldar, or Necrons. Again, this option isn’t as exciting as it once was because the meta has shifted a lot and the Firebase itself isn’t as strong of a standalone option, but it’s still there for armies that find they need to put a lot of anti-vehicle or medium/high-Strength shots into their army. As stated, Broadsides and Riptides are both very solid inclusions in any army, even with no bonuses at all, so you could do a lot worse than bring it in as a support element to something else- worse case, you gain a whole bunch of shots to rain down on the enemy at ~30″ range.

The Firebase Support Cadre doesn’t fundamentally change the way you want to use any of the units in it; it doesn’t open up any new capacities or even really introduce any game-changing abilities to the units contained inside. It offers a mildly-useful benefit that scales up over the course of the game, but probably isn’t going to be a game-winner most of the time. Still, rerolls are rerolls and there certainly exist targets in the game that warrant the kind of high-end response that the formation excels at- if you see a lot of gargantuan and superheavy targets in your meta, the Firebase Cadre can be a solution (or part of a solution) to such problems in a Tau list.

Remember, you can order Games Workshop products from Frontline Gaming at up to 25% off everyday.