The Riptides bigger, badder brother who maybe ate too much at college and is now a few pounds overweight- the R’varna battlesuit. Click to read on, or check out the Tactics Corner for more reviews and strategies. 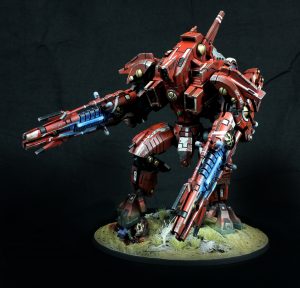 The R’varna is a slower, heavier variant of the Riptide battlesuit; it shares a lot of its qualities with its smaller brother suit, though from a functional standpoint the two models actually end up being quite different at the end of the day. However, in understanding what it is that the unit does it’s fine to take the Riptide as a starting point, so long as we keep in mind that they are not truly the same. Although the R’varna’s rules when it was first released were rather absurdly overpowered, the changes since then (as well as changes to the game’s core rules) have brought its power level down significantly and these days it’s really just a fairly standard, if expensive, addition to the armory.

The most notable and immediate difference between the two is that unlike most battlesuits, a R’varna does not have the Jet Pack unit type and thus is limited to a standard 6″ movement each turn. Apart from that, it has a statline nearly identical to the Riptide- WS2 and BS3 for middling basic combat ability, S6, I2, and A3 for near-identical close combat functionality, and 2+ armor (and a 5+ invuln) for extensive survivability. However, there are two very notable bumps that help it out- Toughness 7 makes it not only immune to S3 weapons but also significantly reduces the chance of middle-tier weapons like Scatter Lasers have to hurt it, while an extra wound (for a total of six) gives it longevity even against the toughest firepower. While it is quite pricey at 260pts, it still has a lot to offer. R’varnas cannot be taken in squads the way other suits can in the newer codex. 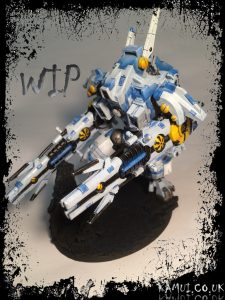 Armament is probably the most relevant way that the Riptide and R’varna differ. Rather than being equipped with a main/secondary setup of guns, the R’varna carries a pair of identical primary weapons; while this does give it some pretty fearsome shooting, it cannot swap them out for other options and thus lacks a lot of the flexibility that it might otherwise have. However, the weapon itself is nothing to sneeze at- each Pulse Submunition Cannon comes with a very respectable statline (60″ S6 AP4 large blast) as well as a special rule that causes it to multiply in effectiveness against “larger” targets. Very Bulky and Beast/Cavalry/Bike models instead are hit with S7 and take two hits for each model underneath the blast marker; Extremely Bulky, vehicle, MC, or artillery models take a further increase to S8 and three hits for each model caught in the area.

This means that the Pulse Submunition Cannon will not only wound almost everything in the game on 2s despite its somewhat unexciting statline, it also is shockingly efficient against many of the heavier targets that blast weapons typically don’t do all that well against- catching four or five Bikes underneath a template normally won’t do a ton of damage, but when you can do it multiple times per turn and double up on your hits you suddenly are in business. Similarly, hitting light vehicles 3+ times (especially if they are clustered up, as Battle Company is wont to do) is great for stripping hull points. And nothing, nothing puts the fear into a Renegades army like a couple of R’varnas across the table that can consistently get 20+ hits on a unit that wound on 3s.

As a Tau battlesuit, the R’varna comes with Supporting Fire (which it is sadly unable to use, since it only has blast weapons) as well as a Blacksun Filter and Multitracker as normal. It also has a Flechette Discharger, which is normally only found on vehicles- any enemy in base contact at Initiative 10 will suffer a S4 automatic hit, which can be great for chewing through tarpits and whatnot.

Like the other XV100-class suits, the R’varna has a Nova Reactor that it can activate at the start of the movement phase. (Interestingly, the wound suffered when failing to activate the reactor cannot be negated by FNP.) However, its Nova Charge abilities are quite different from the standard Riptide’s, and so bear some discussion here. Nova Shield is identical, giving the unit a 3++ save until your next turn. Volley Fire is its firepower increase option- it allows the R’varna to fire each of its weapons twice (a total of four shots), but with the meaningless restriction that it is not allowed to fire any weapons on the ensuing enemy turn. Flank Speed gives it a repositioning option, gifting the suit with the Fleet rule and the ability to Run 2d6″ rather than the normal distance. Finally, Electromagnetic Shockwave inflicts a S2 AP5 Haywire hit on every model (friend or foe) within 6″ of the R’varna; though this can be used to break up massed vehicles, more commonly it will act as a supplementary source of close combat damage when the suit is locked in with a horde unit.

R’varnas are limited to only two support systems, the Stimulant Injectors and Positional Relay. This limitation is actually quite significant, as it leaves them helpless against enemy Deep Strikers or other reserves- normally a major strength of big Tau battlesuits. Stims are a nice option to have, especially on something so absurdly tough already, but the Positional Relay is something of a niche option most of the time. It can also purchase Shielded Missile Drones, though they are no more attractive here than they are on any of the other units- and in fact less so, since taking the full pair of them will reduce the unit to majority T6. 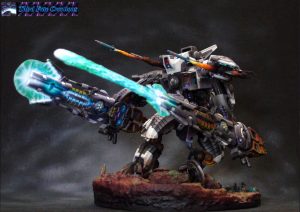 We’ve compared the R’varna to the Riptide quite a lot, and the comparison is an apt one- if you’re taking a R’varna, it’s a very easy question to ask why you aren’t just taking a Riptide instead. While the R’varna may be tougher, the Riptide is available in better formations (including the Riptide Wing) and significantly more mobile and flexible. The Riptide can access AP2 weapons (for both is primary and secondary) and the built-in twin-link on its backup weapon systems means that it is a lot more reliable overall when shooting, not to mention the advantages of SMS and Fusion against particular targets. And you’re also giving up the possibility of Interceptor and other bonuses from support systems- all in all, quite a lot of stuff. So is the R’varna worth all of that?

Well, maybe- like with almost every unit, it depends on what you want it to do. The R’varna is fantastic for taking out certain types of targets, and it’s also even tougher to kill than a Riptide against almost all weapons- both big advantages. If you’re blowing up light-to-medium tanks (anything with AV13 or less, basically) the R’varna can be quite dangerous due to getting enormous numbers of hits. Its guns are also quite brutal against massed infantry of any kind, since they wound all basic troops on 2s and will deny Feel No Pain to stuff like Zombies. But really, what you really want the R’varna to do is be hitting targets where you can take advantage of its blasts multiplying hits on targets- artillery, bikes, and beasts are all great here because they are relatively common in the meta and are things you need to deal with. With four large blasts, even a full-size unit of Flesh Hounds or Fenrisian Wolves is gonna be pretty nervous seeing a R’varna on the other side of the table, since it will be pretty simple for you to put ~30 wounds onto the unit in a single shooting phase. Artillery are even more scared of it and the R’varna is functionally immune to return fire from most common artillery weapons, so even a single R’varna can cause huge problems for a Renegades list if you see them around.

The R’varna also is lacking compared to its brother in another notable department: mobility. While Riptides can actually be very useful to Tau thanks to their rapid repositioning of 6+2d6″ movement each turn, R’varnas are rather slow and clunky. While this suits their intended role (long-range fire support platforms) well, it means that they can’t be used to press forward nearly as well as the Riptide and other suits can, nor can they escape assaults nearly as easily. It’s hard to call anything with a statline as beefy as the R’varna’s “vulnerable” to close combat, most competitive armies will have little trouble locking one in combat if they so choose- this is where the Flechette Discharger and Nova Reactor can come in handy to augment its ability to break lose from a fight. Avoiding combat in the first place is the preferred strategy, however, so make use of that 60″ range and ability to fire on the move and try to keep out of assaults as long as possible.

Speaking of the Nova Reactor, it’s also worth remembering that the R’varna has no way to access any kind of rerolls for its Reactor attempts (and can’t use FNP against them for some reason)- this means that activating it will be much, much less reliable than Riptides typically are and anyone who has used Riptides knows that they absolutely love to fail their Nova Reactor on critical turns. While the R’varna may start with an extra wound, realistically this is going to get consumed by self-inflicted damage pretty much every time, because you want to be popping off that Volley Fire just about every chance you get.

Of course, to even be able to take the R’varna you need to be using a Combined Arms detachment (as it isn’t available in any formations), but this is actually much less of an issue than one might think- Tau rely heavily on taking CADs in order to access the Stormsurge, Tetra, and other specific combinations of units. Still, it’s something that is worth remembering- a R’varna has no way of benefiting from any of the special detachment rules that other Tau units have access to and won’t get any real benefits from a CAD (apart from being available), either. 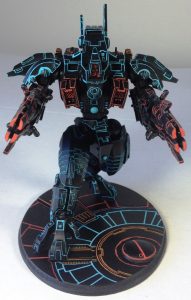 The R’varna is a somewhat specialized and expensive tool, but still a very good one none the less. For Tau armies looking for firepower against the right types of targets it can be an absolute godsend and the unique abilities on its Nova Reactor make for some interesting shenanigans if you can get it into the right situations. Thankfully Forge World listened to the complaints about it and toned down the power of its main guns somewhat during the “test” period, making it a much more fair-seeming unit all things considered; we can only hope that the rumored Tau vs. Mechanicum book that has been in the works for some time now will finally put the R’varna (and other “experimental” units) formally into the game at some point.

Remember, you can always buy Games Workshop products at up to 25% off from in the Frontline Gaming store, whether you’re looking to add to your current army or start an entirely new one.