The Tau’s solution to close combat and point-blank engagement, the XV9 Hazard suit. Click to read on, or check out the Tactics Corner for more reviews and strategies. 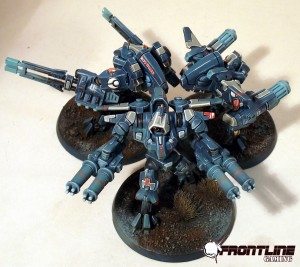 The XV9 Hazard battlesuit is a mid-tier close-engagement suit for the Tau army. When originally introduced they were intended to be a larger, upgraded version of the Crisis/Broadside suit- however, with the changes in model scale, they really aren’t any bigger than Broadsides despite their nominal classification and despite supposedly sharing a mass class with the XV95 Ghostkeel they are significantly smaller than it.

In most respects, it is easiest to compare Hazard suits to Crisis, since they are essentially just an upgraded version of them. Their statline is very similar- they have T5 as an upgrade and all Hazards benefit from Leadership 9 due to being piloted by veterans, but aside from that they are identical in terms of their basic numbers and their loadout ends up being rather similar as well. 3+ armor isn’t exceptionally exciting, but their upgraded Toughness makes them less likely to take wounds from basic guns (especially S3 ones) and prevents them from being pulped instantly by weapons like Lascannons and Battle Cannons. 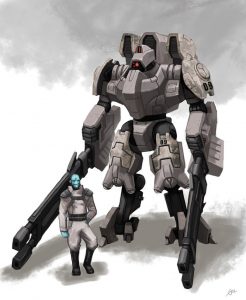 XV9 battlesuits, like all suits, have built-in Multitrackers for firing two weapons and Blacksun Filters to ignore Night Fight and Blind; they additionally come with Bonding Knives, Vectored Retrothrusters (Hit and Run), and Defensive Grenades in the mix, giving them a very solid setup. The basic suit comes with a pair of twin-linked Burst Cannons for 75pts, meaning they essentially are paying 17pts (compared to a theoretical Crisis with the same equipment) to add in +1T and defensive grenades. This is not a bad thing all in all, especially as the Burst Cannon as a weapon is significantly improved compared to older editions.

Hazards can also upgrade to several other weapons that are unique to them- however, these upgrades are very expensive and so often don’t look terribly attractive, especially since the base suit itself is far from cheap. Weapons are available to be swapped individually, but as with other suits you should avoid mixing them in order to keep the unit’s role clear, so I will be discussing them as pairs.

Phased Ion Guns are the cheapest of the upgrades at 20pts for the pair; they are very similar to the basic armament with 18″ range and four shots, but are S4 AP4 with Rending. The slightly altered profile is actually fairly awkward- while it does well against Necrons and other 4+ save models, it is worse against both Guardsmen and Marines, only really having any serious improvement against MCs and vehicles. The Fusion Cascade is 30pts for the pair and is a bit more useful; although only 12″ range and S6 AP1 to start, each gun gets d3 shots, so you can actually put a lot of hurt on an armored target if you manage to land within double pen range- Commander Farsight seems like a necessity here. Again, though, the significant cost and deficiencies in the statline mean that you may very well be better off with a simpler option, since you can’t ID characters, etc with them and a squad of Crisis with standard Fusion will put out similar numbers for the cost. The last of the weapons is the Pulse Submunition Rifle, which is a 24″ range with S5 AP6 and Ignores Cover, firing a nice big pie plate. This is an extremely excellent statline (range aside) and can do a lot of work for you, but at 40pts it is incredibly pricey- still, it chops up basic infantry pretty well as long as you can stay alive and having Ignores Cover built in is nice. Also note that it is a Pulse weapon, and so can benefit from the Ethereal’s Storm of Fire.

Compounding the issues with the Hazard’s price tag is the mandatory upgrade to a support system for every suit. Thankfully there are some good options here that don’t break the bank- Counterfire Defense Systems (BS2 overwatch) and Advanced Targeting (Precision Shots) both stand out as good choices for several of the guns and Target Locks are always useful- but the mandatory inclusion on top of an already-expensive platform does not do them any favors. Hazard squads top out at three members plus the usual drones- however, be very careful when including drones, as they can easily bring the squad down to Toughness 4. 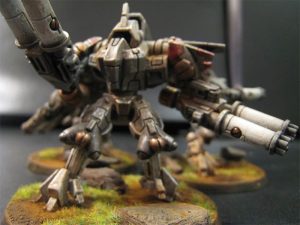 The Hazard suit is an unusual inclusion for Tau, but sadly probably not one most players will have much interest in. Its “unique” guns are universally overpriced and come on top of a suit that is itself probably more expensive than it needs to be, so there is not much incentive to do anything with it; anything that a Hazard can do, a Crisis or Ghostkeel won’t do better or more cheaply. They aren’t completely without advantages, though- Hit and Run built in is a nice bonus, and Hazards effectively are getting six “hardpoints” worth of gear: two each for the Burst Cannons, one for the Retrothrusters, and another for their final support system. If you really want to do something fancy with a squad, Hazards just may be able to pull it off.

The price tag really is the problem for the Hazard- with most weapon loadouts exceeding 100pts for a T5 W2 model, it looks incredibly fragile and not all that impressive of firepower given how much you’re paying- when a Skyray or Hammerhead being only marginally more and a full-size MC battlesuit not much more than that, it’s incredibly difficult to justify spending those points on a Hazard unit. As we’ve mentioned before, the Tau codex has a lot of pretty solid options available to it- nearly everything in the book, in fact. That the Hazard doesn’t meet this same bar means there’s virtually no reason to look to it when a dozen other options from the book can do at least reasonably similar jobs with a multitude of advantages of their own.

The “best” loadout if you feel you want to use them is probably the basic Burst Cannons- with high rate of fire and high accuracy as well as a natural predisposition to get in close to the enemy, they can serve quite well and the 75pt cost for this version is not too unbearable, considering how it compares to other units with similar armaments. Pairing the unit with Commander Shadowsun can be a very nice trick- her Stealth+Shrouded helps keep the Hazards from taking too many wounds while their T5 protects against the basic guns that are often the bane of such a unit and easily shrug off larger weapons. Moreover, her warlord trait lets the unit quickly reposition to best advantage and she can crack open transports while they bring down any infantry in the area, providing some natural synergy for the two.

The Hazard suit isn’t completely worthless, but it’s a long, long way from being an all-star and even in casual games it’s rarely going to impress much. Unless you have some you desperately want to use or are taking a voluntary handicap, you’re better off with almost any other selection from the Tau armories. Still, it’s not all doom and gloom- while I may harp on the weaknesses of the unit a lot, it can’t be compared to the real stinkers like Pyrovores, Hellions, or Penitent Engines.

If you’re looking to expand an existing army or start a new one, Frontline Gaming offers up to 25% off on GW products everyday.