Ibushi back from the webway, today we’re looking at another classic space pirate unit – the Corsair Wasp Assault Walker. This was originally released in IA11 as a powerful Corsairs troops choice but in the new version it has been changed somewhat. Aside from bouncing around like a jackrabbit, can this model do anything on the tabletop? Read on to find out, and be sure to check out the Tactics Corner for a wealth of great articles.

Styled as both scouts and assault elements, more aggressive than the classic War Walker, the Wasp Walkers first came out in the original Doom of Mymeara release looking to be a new iconic Corsairs unit. You could actually take them as Troops which was amazing, as this was before scatbikes were a thing. Re-released with some new rules, the Wasp is very much back to stay, but I would argue FW dropped the ball on this one, leaving a somewhat lack lustre unit. Saying that, it is still a solid unit that can get work done, with a couple of nasty tricks up its sleeve.

Much like the regular War Walker, a Wasp Assault Walker is an open-topped 2HP walker with AV10 all round and two heavy weapons, coming in units of 1-6. Weapons are a choice of shuriken/splinter cannons, scatter lasers, bright/dark lances, starcannons, or EMLs, the usual Eldar and Corsair stuff for marginal point costs if anything. Like a regular War Walker it also comes with Scout and Fleet, then Reckless Abandon or Battle Focus – all solid rules.

Craftworld Wasp Walkers also come with Power Fields for a 5++ while Corsair Wasp Walkers get Kinetic Shrouds as basic wargear, meaning they benefit from a 5++ if they move their full 6″, and if they Deep Strike they get a re-rollable 4++ which is pretty decent. While a bit of a mixed bag, Kinetic Shrouds do seem a tad better than Power Fields when used in synergy with Void Burners for deep strike deployment, but Power Field saves also apply in combat which is solid. Either way, having some kind of a save on an AV10 platform is helpful. 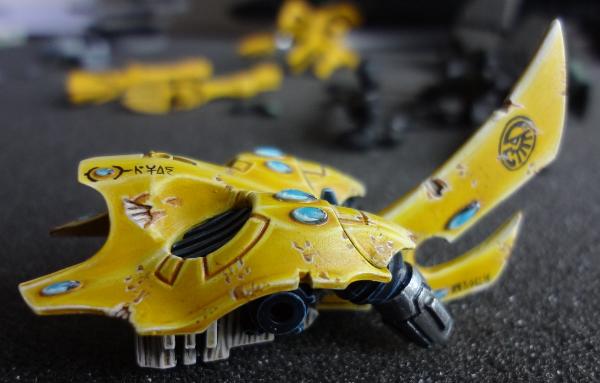 The final piece of wargear is the unit’s namesake: the Wasp Jump Pack, and this is where the wheels start to come off a bit. The Jump Pack allows the Wasp to make a special 8-12” jump in the movement phase (no less than 8”), over terrain etc., but then it can only Snap Fire in the shooting phase. Not great, but useful if you are shaken anyway. Alternately the Jump Pack can be used in the Assault Phase to roll 3D6 and pick the highest for charge distance, and to cause D6+1 Strength 5 Hammer of Wrath hits – not so bad, but why are these guys charging? Lastly, either use of the Wasp Jump Pack juices up the Kinetic Shrouds, giving a re-rollable 4++ for Corsair Wasp Walkers against shooting in the following turn, which is a nice perk, but does not apply in close combat unfortunately.

The Jump Pack is not horrendous, but it does contribute to some role confusion and generally seems a missed opportunity for something better. There are two applications where the Jump Pack wargear is useful: jumping 12” to take an objective and benefitting from a re-rollable 4++ against return fire, or for dog-piling Wasp Walkers into a weak unit to kill it with s5 HoW attacks followed by a few punches. Neither of these uses is a key battlefield role for the unit, nor something to rely upon. At +10 points over a regular War Walker, the Wasp with its jump pack doesn’t seem super worth it based on this, even if extra hammer of wrath hits are a nice bonus. 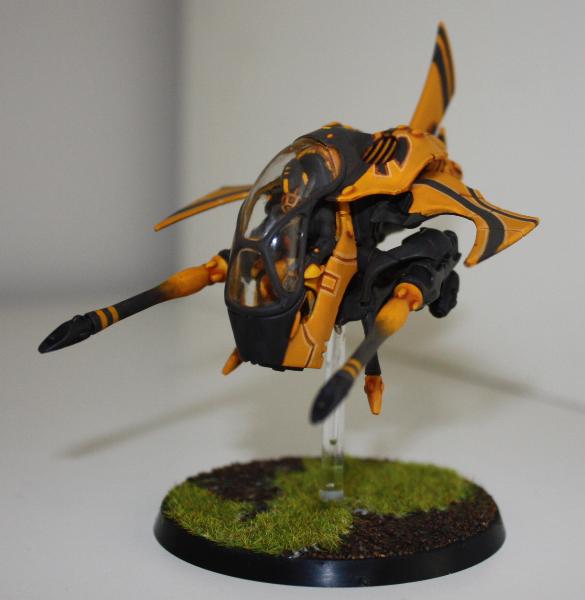 What is frustrating is that the elegant solution of just making a Wasp Assault Walker either a jump walker or jet walker would have been both simpler and better. Jet would be my preference of the two, giving huge mobility when combined with Battle Focus/Reckless Abandon and jetpack thrust moves, as well as natural Deep Strike and a 12” Scout move. Jump is less exciting, only buffing movement and Scout distances, but would still have been pretty decent overall, would differentiate the Wasp from other walkers more, and wouldn’t cause the walker to Snap Fire when jumping. At least giving the Wasps the Deep Strike rule would have been really helpful.

Again there is another truly absurd missed opportunity on FW’s part here, or just a straight up mistake actually, in the awesome-sounding Wasp Phalanx formation for Craftworlds Eldar also found in IA11.2. This formation consists of 3-6 Wasp Walkers (apparently not in a unit), and if they deploy by Deep Strike they re-roll failed Power Field saves and their shooting becomes twin-linked and Pinning for that turn – awesome! Reading the rumours for this formation before the book dropped, I ran out and bought three of the classic 1980’s ob-gyn war walkers in excitement, but upon getting the book and reading it cover to cover several times… there is absolutely no way to actually get Deep Strike for Craftworlds Wasp Walkers. Huh? Yep, you can take the formation for access to a ton of Wasp Walkers, which under the Craftworlds Warhost formation for automatic 6” Battle Focus is seriously good, they just never get to utilize their formation rules. This is another one that you can scratch your head and house rule in the local scene, and which makes Wasp Walkers legitimately fierce, just don’t expect to turn up to a GT and deep strike your walkers without explicit TO support.

Now that we’ve looked at some of the slightly confusing rules that Wasps have, at the end of the day they are basically just 70pt War Walkers with two key differences – Corsairs can take them, and they have their own formation.

The one solid advantage Corsair Wasp Assault Walkers bring to the table is the synergy between their Kinetic Shrouds and Deep Strike. Each model can take Void Burners for +5pts to gain the Deep Strike rule, then of course with Sky Burner Coterie rules they re-roll Reserves and only scatter D6” on the drop, making them nasty drop-shot units. Lastly they are an Elite slot for some reason, which have very little competition in the Corsairs list, so it is easy to squeeze two lone Wasps into a Sky Burners coterie for just 150pts.

Drop these models down in extreme corners of the board with pinpoint deep strike, shoot up rear armour and profit. Compared to jetbikes they are even somewhat resilient thanks to the 4++ and not having morale issues, which really helps for scoring things like ‘have a unit in the enemy DZ’ or holding an objective that is somewhat exposed. If you really want to, Corsairs could take a unit of 6x Wasps for 450pts and Deep Strike them fairly safely into the backfield, from where they would lay down a real hail of firepower. The better tactical option is to go MSU though, which is where Craftworlds Wasp Walkers bring a unique edge to the game. 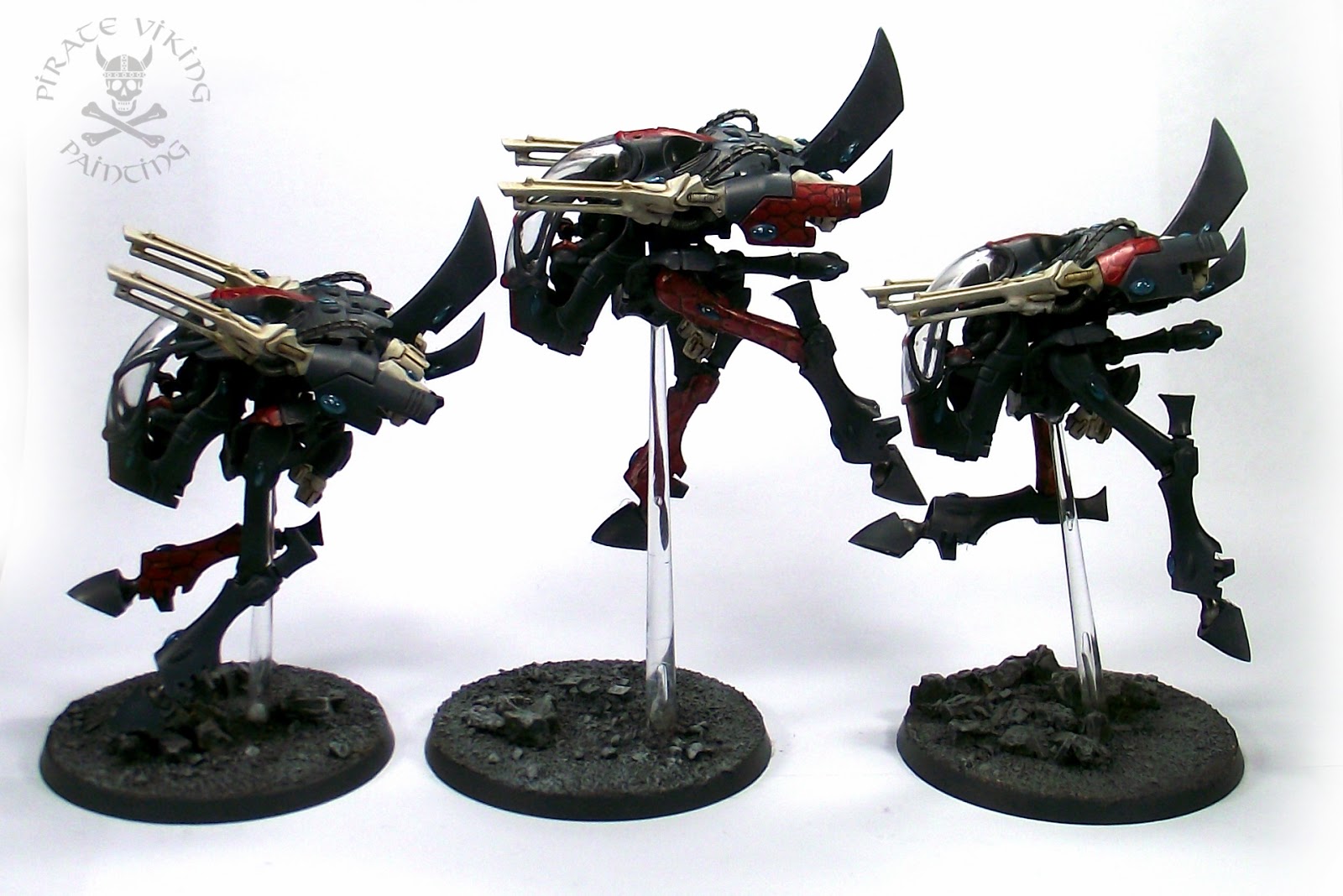 Thanks to the Wasp Phalanx, Craftworlds armies can load up on up to 6 individual Wasps per formation at 70pts per model. These are again slightly more resilient than jetbikes, are pretty mobile thanks to Battle Focus (especially with Matchless Agility), pack a nice amount of firepower in the form of scatter lasers and starcannons (double bright lance on the occasional Wasp maybe), and as the models are individual units it is quite hard to knock them out quickly. The extent of firepower and MSU shenanigans is formidable with a double Wasp Phalanx, and if they could Deep Strike as intended it would be even nastier. Also with this quantity of models the 5++ can really prove its worth, especially in combat. My Corsair Wasps always die to Space Marine combat squads charging in with s4 punches and a grenade — having a 5++ to stop that occasional melta bomb really helps.

Of course unless you have a guaranteed first turn, starting Wasps on the battlefield is usually a one way ticket to destruction with only AV10 and 2HP. Fortunately with Scout they can redeploy behind cover or just start in Outflank reserves. 12 outflanking Wasp walkers, coming in turn 2 on a 2+ thanks to the inevitable Autarch, can lay down a real firestorm from a lot of corner angles, pumping out 56 scatter laser shots for 840pts. 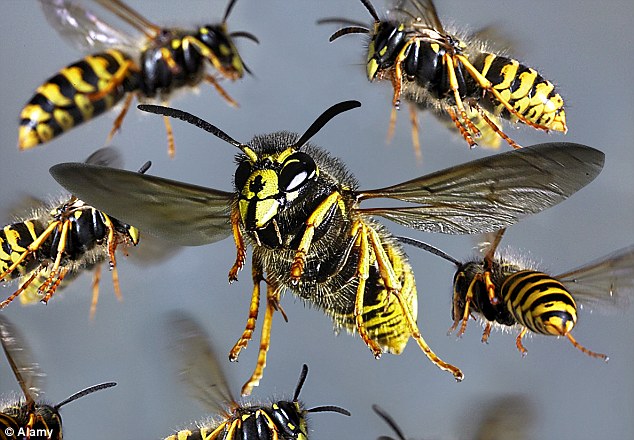 With something like 12 Wasps coming in solo, suddenly the Wasp Jump Pack starts to look like more of an asset too – at least 1 or 2 Wasps will need some extra movement to get onto an objective or to reposition each turn, and that 12” jump comes in handy. Likewise if you have 5 Wasps outflanking into the same board corner, ganging up on units with 5D6+5 HOW attacks at Strength 5 is no joke. If you do pull this tactic off, annoying wasp noises are going to be obligatory.

Not a game-defining unit like the Warp Hunter, the Wasp Walker is nonetheless a solid unit to try out. The trick seems to be focusing on running these as lone predators, 1-2 Corsair walkers dropping down and running amok, or as a whole MSU Phalanx of solo shooters trotting all over the board creating havoc. These knock-kneed Xenos machines are still just psychically animated origami, send them sprawling with some blessed bolter rounds or a hallowed krak grenade and call it a day. Just be aware of the surprising battle of attrition a Wasp-heavy list can play with some Eldar hide & seek tactics.

The Anatomy of a Wasp: http://i16.photobucket.com/albums/b3/WestRider/WaspAnatomy.png

Haha love it, this is great. If only the Wasp Walker rules represented this just a bit more!

Yeah, FW just should have made these things jump vehicles. They way they have them now is just… awkward.

And that’s the story of Wasps, they’re not bad but just awkward.

Agreed, just a bit awkward and really a missed opportunity for something pretty neat.

Even so, if you do try out the full Wasp Swarm approach, it is very nasty indeed. Just costs an arm and a leg to play… like anything FW.