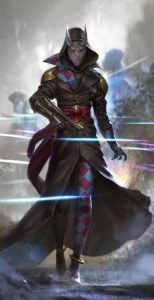 Zyekian here once again to highlight an unsung gem from the webway: the Harlequin Solitaire.  He (or she?) can be a fantastic addition to your list and not just among the pointy-eared xenos.  Read on to find out why this little nightmare has a place in your army.  And as always check the Tactics Corner for more great ways to make your army hum! 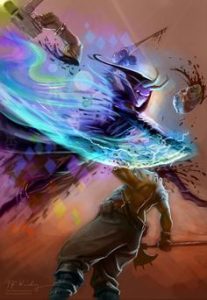 “The first the foe knows of the Solitaire’s onset is a shimmering blur of light and color streaking through their ranks.  Then the killing begins.  Soldiers fall, eyes widening as heads are severed, throats opened, and hearts pierced.  Blood falls like monsoon rain in the wake of a killer too fast to be seen.  Only when he pauses for a moment amid the slaughter do his victims get a glimpse of their executioner – a domino field swirling around his lithe form, his grotesquely masked head tilted at a curious angle as he regards those he hunts.”

Solitaires are the strangest and most terrifying of all Harlequins.  Treading the Path of Damnation with their souls already doomed to Slaanesh, they laugh nonetheless, donning a twisted mask in mockery of She Who Thirsts.  It is said that Solitaires are gifted insight into the Fall of the Eldar by the Laughing God himself, not of a final battle to end the Eldar race but of a final jest, tricking Slaanesh not into destroying the Eldar but freeing them.

Solitaire packs a bucket of tricks for just 145 points.  His 12″ move gives him a large threat range while a flip belts means he ignores terrain for movement and assaults, striking on initiative even without grenades.  And the Solitaire’s stat line is impressive. 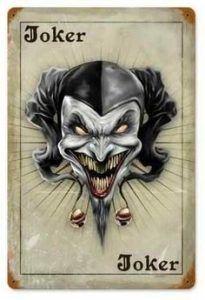 This is a whole lot of rules to keep track of on the table for just one model.  For the casual reader this boils down to a highly mobile assassin who can bounce between combats dropping precision AP2 strikes where they need to go.  He’s particularly good with a bit of backup diverting attention away from him while he challenges out enemy characters.  Assaulting with a nearby Troupe at his side or a unit of allied Coven Grotesques will scare the space pants off just about anything not sporting death star shenanigans.

A word on Knights.  A Knight near a Solitaire is already dead, he just doesn’t know it yet.  When facing an Imperial Knight you should have your Solitaire constantly watching for an opportunity to take the giant down.  The Solitaire throws a haywire fastball on the way in, then blitzes his way in for 12 attacks.  That’s 12 chances to roll those sixes to auto-glance.  A damaged Knight just exploded right there.  Avoiding the stomps is easy enough as long as they’re not squishes, then repeat, hitting and running back and forth as needed.  Solitaires love fighting Knights.

The Solitaire’s weakness is that of all Harlequins: massed small arms fire.  T3 and 3++ save even it’s invulnerable means a fair amount of fragility so expect him to tolerate no more than 20 bolt gun shots before vanishing in hail of glitter.  Eternal Warrior will make him an unattractive target for low volume large weapons though so don’t sweat the big stuff.  Or grav.  And as we’ll discuss in a moment, the Heroes’ Path formation will grant the Solitaire a 2+ cover save in terrain which is extremely good.  Suddenly he’s fairly durable against most shooting in the game.

The Solitaire’s best defense against shooting is being in combat during the opponents’ shooting phase.  With choice targets and a bit of luck it’s possible to pull off matches where he spends almost all shooting phases safely tucked into assaults, finishing them in the opponents’ turn or using hit and run to dash out of combat for yet another assault.  The Solitaire can easily cross the table with this trick, as a 3D6 hit & run move + 12″ move + D6 fleet run + 2D6 fleet assault is a roughly 36″ maneuver (potentially 48″).  And I guarantee your opponent will not see that coming.

A secondary weakness the Solitaire possesses is high-volume melee attacks that can overwhelm his defenses.  Given his mobility and ability to pick his battles this isn’t too much of a problem though.  And remember that with WS9, most opponents will need to roll a 5+ to even hit.  And don’t forget to use precision strikes to eliminate the most effective combatants before they can swing.

A Solitaire in your List – And the Path of Heroes Formation

He’s an obvious choice for a Harlequin list, filling an elite slot in a Masque Detachment.  And you can squeeze him into Eldar, Dark Eldar, or Corsairs, right?  Yeah you can, and the dynamic threat be brings can be very useful, especially in a meta shifting toward rapid assault and counter assault.  He’s got the weight of an entire assault unit himself as well as an invulnerable save, something those armies are often short on.

Harlequins are Allies of Convenience with the Imperium, and that means the Heroes’ Path formation is nice and accessible to a wide array of armies.  It’s just three models: the Solitaire, a Death Jester, and a Shadowseer, all granted stealth, shrouded, and infiltrate by the formation.  The drawback is that each model must walk alone, never attaching to another unit.  The Solitaire adds a dimension of speed and long-range assault that those armies lack, while the Shadowseer can bring a Mask of Secrets relic for a -2 leadership bubble against enemy units, extremely useful for Shriek-brarians.  The Jester brings a nice BS5 shuriken cannon to the table with the potential to make enemy units fall back in the Harlequin player’s direction of choice.  It’s worth considering the Heroes’ Path where you’d use an Imperial Assassin – or in addition to it, especially if you’re using other psykers to pool up with the Shadowseer. 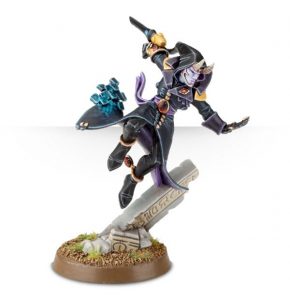 The Solitaire is a blast to play and matches well to his fluff background: a swift and expert killer capable of wreaking havoc in the enemy anywhere on the table.  Give him a try and you’ll be hooked!

What are your thoughts on the unit?  Worth taking in a competitive setting or not?  Be sure to leave a comment down below!

I am… skeptical of the idea that a Solitare is particularly good against a Knight. If it’s already down 3-4 HP, then sure- you’ll kill it pretty good. But if it’s at full health, you will probably run in and do some moderate damage and then he will swing the D-sword at you and Stomp you, and your chances of going under instantly are actually pretty high. Eternal Warrior doesn’t really save you very well at all, and a six on the Sword, or on the Stomp, or just failing an invuln and having it do enough wounds will all take you out.

I witnessed a Solitaire solo a knight in a 2×2 tournament I was in a while back. It took two turns but he solo’d it clean taking no wounds from the knight. I think the Knight was down only 1 hp going in. The Knight needs to roll a 5+ to hit the solitaire. As long as the knight doesn’t roll a six odds are the Solitaire will do some work.

Harlequin players will usually have a troupe nearby with more caresses and a Troupe Master chucking another HWG. I think Solitaire + Troupe assaulting is probably what will tear a knight to ribbons more than just the Sol alone. I think a Sol alone will take advantage of a hurt knight very effectively as you mentioned.

Sure, it’s certainly possible that the Solitare will do the job- they’re very good at pinging 1-2 HP per turn off a Knight (or other vehicle.) But the Knight just needs one six on any of like three different rolls to vaporize the Solitare, and even failing that there is a reasonable chance that it will just sort of drag it down with normal wounds on failed saves.

Bringing another unit in with it (Troupe with Caresses, etc) is much more reliable, since you can swing well ahead of the Knight and kill if before it gets a chance to get lucky and wipe you out.

Actually he might have had a Troupe with his Solitaire. I don’t know, I was in round three of boozehammer and my teammate was doing his own thing…… but his Quins smacked the pants off a knight in CC and I was like whoa.

throwing a haywire grenade is a pretty safe 1 hull point, it’s pretty easy to get around an ion shield.
so 2-3 is pretty likely. and 4 is certainly not out of the picture

I’d agree solitaires have the potential to be impressive vs a knight, particularly considering their respective point costs. It is a potentially risky play, but to have a 400 point model fishing for 5s and 6s vs a 145 point model is worth a mention.

Anything with a caress is good vs a knight. Just wish Kisses could hurt AV13….

Hero’s path is a staple of my Eldar list.

I run 2 farseers, and typically roll on the Eldar table getting one or both with fortune. A fortuned solitaire is nearly unkillable. I have to the frustration of my opponent, tarpitted entire stars. That also means you can charge into nearly any large threat.

My Solitaire has slayed Knights, dreads, demon princes, land raiders, and more. Such an effective tool. however, you need patience.. if you are overly aggressive you will find yourself in mass bolter situations, which as stated will get you killed right quick.