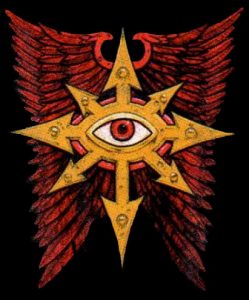 Hey everybody, Adam here from TFG Radio, and today we’ll be talking about the new Traitor Legion rules for my favorite legion, and they better be since I’ve played them for over 20 years, Black Legion! As always, for more tactics articles, check out the Tactics Corner! 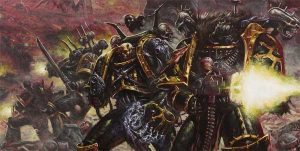 The Black Legion, formally the Sons of Horus, formally the Luna Wolves, are a first founding legion and one of the legions that turned traitor during the Horus Heresy. Led by the Warmaster Horus himself, they were the vanguard for both the Emperor, during the Great Crusade, and then the traitor forces during the heresy. Under the leadership of Abaddon, they have reclaimed their place as the premier legion and continue to be at the forefront of forces of chaos. This article will go over their rules and formations with the new book. 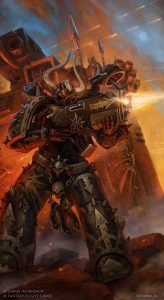 Having only Abaddon available is fine. Although clocking in at about 250 points he is a solid leader for the legion. Even before this book, Black Legion units were required to get VotLW and so added an extra cost, or tax, to already expensive units so getting it for free is a small boost. The wording for generating psyker powers is unusual in that it says that you may, not must, choose powers from their respective god. This allows you to actually get the primaris power for free from some of the other psychic disciplines. (Edit: This is most likely wishful thinking on my part. At the very least you can take all powers from a certain psychic tree in stead of just half. From my experience it has been better to just go with no mark as that gives you greater flexibility.) 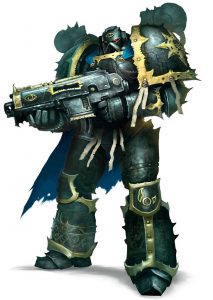 Units in a Black Legion Formation/Detachment gain the following:

With all the armies available to an Imperium player, Endless hatred is actually a nice touch. In most cases you will be getting into combat at some point and those rerolls will help. Terminators and chosen being troops is a carry over the Black Legion supplement, as is most of the formations. This distinction really only matters if you are planning to use a combined arms detachment (CAD). This is still useful as there are formats, such as Oldhammer, that only allow a CAD. Being able to choose artifacts from both this supplement and the Chaos Space Marine Codex is also helpful if you prefer something from their instead.

Depending on what you are fishing for may affect on how useful this chart is. Eye of the Gods and Unholy Fortitude are very useful traits. Having stubborn, leadership 10 units does help with units staying in the game. Balefire, Soul Eater and Black Crusader don’t thrill me as much but can be useful in a pinch.

These are the same artifacts as those from the Black Legion supplement. Eye of Night is basically an orbital bombardment that is a bit overcosted. Hand of Darkness is good, but only 1 attack and 50 points doesn’t fill me with an urge to use it. The 2 I would most likely use is the Skull, with eternal warrior, and the Spineshiver Blade. Both are the most useful with the Skull getting the edge due to eternal warrior being useful all the time. 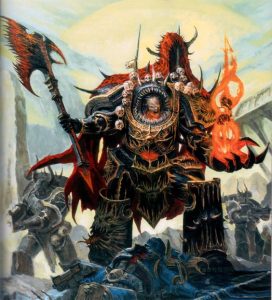 Sons of the Warmaster

Next we have the Black Legion “Decurion”, so here is what we get.

Fear and Crusader are ok and the reroll on the warlord chart seems to be pretty standard these days. I think the nice rule in this is the Speartip Strike. With the right combination of units and formations, you can easily alpha strike most armies with a number of units charging on turn one or shooting the moment they arrive.

The detachments are combined from both the Traitor’s Hate and 2nd Edition Black Legion Supplement. The benefits from the core choices, being able to run then charge once per game and +1 strength if you roll an 8 on the charge(Hounds of Abaddon) and rolling twice on the boon chart, and reroll hits of 1 army wide if an enemy unit is destroyed (Black Legion Warband) are nice but, to be honest, not as good as the objective secured(obsec) and rolling twice on the boon chart every turn that you get with the regular chaos warband, which is also an option for the Black Legion. Everyone’s favorite, Cyclopia Cabal, included as a Command choice, is still there so expect that in almost everyone’s army. 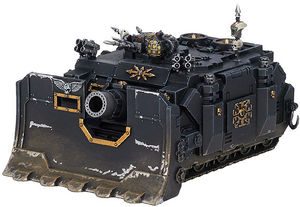 This does not mean that they aren’t workable as a competitive army. Taking advantage of the Speartip Strike rule, you can easily make use of the raptors, from both core choices, and combine it with the Raptor talon formation and the Terminator Annihilation Force for a pretty heavy hitting turn 1 assault and shooting. Sure they aren’t obsec but you can mitigate that by targeting units that are obsec in your opponent’s army. Another option is to use the Cult of Destruction to have units of Obliterators drop in turn 1 and hit a bunch of units. The wheels in my mind are turning! 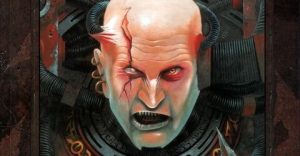 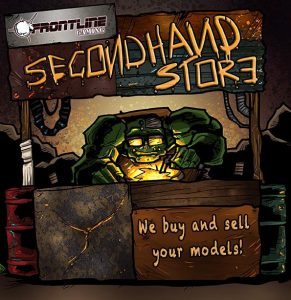 ..probably wishful thinking that the BL psychic generation rule overrides the deity power restriction that comes attached to the rules for having a mark.

I realized that. It just actually lets you use the whole tree, not half. I will correct it.

I want to like the Black Legion, and there is some awesome potential for alpha striking in there especially with oblits, raptor talon and some termicide combi-meltas, but not getting Obsec from the warband hurts. and I am not a fan of their Black Legion warband special rule at all.

Getting the Cabal as a command choice is nice, though. I think you could make a pretty killy force with the Black Legion’s Spear TIp just not sure if it’s better than having the obsec warband.

The FOC swaps still matter in a few places, even when not using a CAD. Not as much as when things move out of FA/HS, but DeathWatch have a number of things that get differing benefits depending on the FOC slot of their target, and when playing regular Maelstrom, a number of cards key off FOC slot.

I think it is better for Black Legion players to use the Traitor’s Hate book Black Crusade Detachment or a CAD. Legion rules apply to ANY detachment that follow the restrictions.

With Black Crusade Detachment you get ob sec, more formation options, and rolls on the boon table every turn. Every roll on the boon table has a 1/18 chance of generating a Daemon Prince. This is done twice per turn and you can choose one or both of the results. Or just use it to super buff a lord.

I think this is better than the Black Legion Speartip that only gives fear (lame), crusader (meh), and possible first turn deep strikes (but only on a 3+ with no scatter mitigation – bleh – way worse than Skyhammer Annihilation or similar loyalist things). I am going to say this decurion straight up sucks.

Word Bearers and some others might also want to Black Crusade detachment as well.

Yeah, with my Black Legion I use the Chaos Warband from Traitor’s Hate. I do plan on using the hounds of abaddon and raptor talon just for shits and giggles