Hello denizens of the internets, SaltyJohn here from TFGRadio bringing you the Word Bearers from the new Traitor Legions supplement! For more reviews, bat reps, tactics discussions, and analysis check out the Tactics Corner! 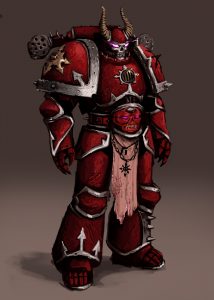 The Word Bearers were the first of the Emperor’s Legions, we know about, that fell to Chaos. After the Emperor, and Rowboat, reprimanded Lorgar and his massive Legion at Monarchia the Word Bearers set out to find beings worthy of their worship. Fittingly the Word Bearers Chaplain Erebus was the architect of Horus’ fall to Chaos and responsible for sowing the seeds of the Lodges into the hearts of the Legions as a tumor that would manifest as the terrible cancer of Chaos. As the first Legion to enter the Eye of Terror they have a larger number of possessed and summoned daemons at their disposal than the other traitor legions. Word Bearers were the first Chaos army I ever built and painted and the Horus Heresy novel Aurelian was one of my favorites so far. The new rules coming to us in the Traitor Legions book have sounded great so far, here I’ll break down the Word Bearers for us. 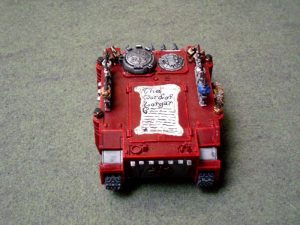 A rhino from my old 5th edition Word Bearers army.

At first glance the Word Bearers didn’t make out as well as the other Traitor Legions who got new rules. They don’t have the relentless hordes of plague marines marching across the table blasting away with their heavy weapons while shrugging off fire, they don’t have the ability to get that sweet turn one charge like the World Eaters, they don’t have access to unkillable Warlords at the head of outflanking Warbands like Alpha Legion, but they do have some really cool options and the best part about this book in my opinion is it all fits with the fluff of the Legions while not having any negatives, or drawbacks, attached to it. Kudos GW on not making each Legion have some crazy draw back for taking them. 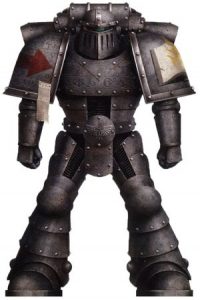 If you take the Word Bearers detachment, and honestly why wouldn’t you the Chaos Warband alone is worth it, you get three additional Command Benefits. 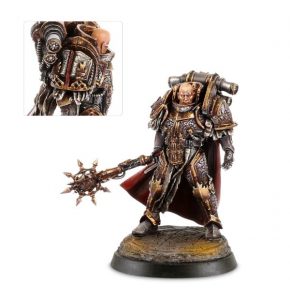 The Warlord Traits for all the factions in the Traitor Legions book are solid and it’s impressive that each Legion got their own, plus the ability to re-roll on the chart if you take the detachment!

The boon chart is really good for Chaos these days with the ability to re-roll most of the bad results. Meaning turning into a Spawn or Daemon Prince. With Traitors Hate and the proliferation of Chaos Warbands across the table tops of the 41st millennium we’ve started to see an awful lot of 160 point Chaos Lords who become absolute beasts in a matter of a turn or two just from the Boon chart. All these re-rolls to the boon chart and ways to roll without winning in combat have finally made the boon chart what I think GW was trying to make it from the beginning. 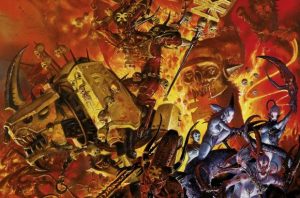 Each of the new Legions also get unique Chaos Artefacts and again it was impressive that the majority of these are good! GW has really come a long way in just under 2 years since Kirby retired and the new board took control. It’s turned around so much in so many different ways. 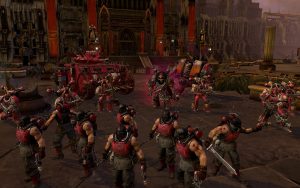 With all these Special Rules, Artefacts, Traits etc giving bonuses to movement, and close combat it’s clear that the Sons of Lorgar seem to be eager to mix it up in the Assault Phase. They’ve also got access to the best psychic forces outside of the Thousand Sons. You can take a large number of Sorcerers and Dark Apostles with this style list. A Warband, plus Lost and the Damned, with Daemon Summoning Sorcerers is going to give you a lot of board control options. Not to mention the boost those units will be getting from the various Special Rules like Zealot and Crusade.

A Word Bearers force can be built to be very mobile utilizing bikes for the characters, or Rhinos. It can also be a fairly fast horde style list with the Zealot rule and access to Cheap cultists in the Lost and the Damned formation. I would try running something like this with Word Bearers:

1850 points. You have a lot of board control, a good amount of Obsec and tons of highly mobile summoning potential for the army to put out even more bodies or even Summon a Blood Thirster if you get a good roll on Malefic! The benefits of the Boon Table re-rolls and extra rolls cannot be overstated in my opinion. Especially in a Word Bearers force where each turn a different character gets an additional free roll on the chart. You can get your 155 point Chaos Lord buffed up to the equivalent of a 200+ point Wolf Lord in no time at all through the boon chart. Also access to Crusade and Zealot in the army and free VotLW makes for a much more viable build for the Word Bearer players out there. When you combine all that the Word Bearers can do you really can get a potent mix. The only gripe I still have actually concerns the original Chaos Space Marines book from which the basic rules for these units are pulled. That gripe is a lack of the Bike option for Dark Apostles. Dark Apostles are cool units in a Word Bearers detachment but their immobile nature, and the GW FAQ not allowing bubble powers to extend outside of transports, makes them a much less viable option. If they could zoom around on bikes handing out Zealot like an ice cream cart vendor to neighborhood kids on a 100 degree day we’d be set.

While this is not the best of the new Traitor Legions rules it is by no means a set of bad rules, or even sub par. I like the characterful nature of all the rules in the new Traitor Legions supplement and the lack of any major down side to choosing to play as these legions. Hopefully this release, coupled with Traitors Hate and Wrath of Magnus will see a nice shift in the meta and more CSM armies once again parading across the table top as actual Chaos Space Marine armies and not just “counts as Battle Companies” in traitors clothing! 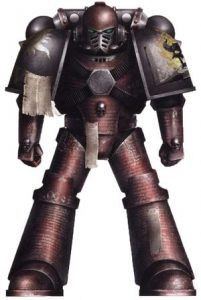