Hello everybody, Danny from TFG Radio here again with another Traitor Legion overview, but instead of Blood for the Blood God, let’s look at the steel strikers, the metal malcontents, the Iron Warriors! You can also check out all the new Tech for Chaos at Frontline’s Tactics Corner.

With the release of Traitor Legions, all nine of those legions that turned against the Emperor are back, and the Iron Warriors provide Chaos players with an army designed to do one thing: blow. $hit. up. With a host of special rules designed to make you an army of armor-devastation, the Iron Warriors are your go-to pick if you want to ruin a rhino-rush Battle Company’s day. 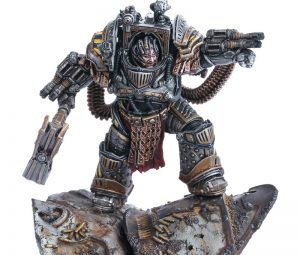 You can tell that his preferred method of war is subtlety.

No unique/named characters of any variety.

All units able to take Veterans of the Long War (VotLW) must do so, but for free!

If you’ve been keeping up with all the new info and guides from Frontline Gaming, you’ll notice that as Iron Warriors are Chaos Undivided, there is no focus on a specific deity, but you also don’t get to have Marked units. 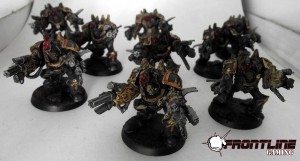 Blood Feud: All units with VotLW reroll all missed attacks in melee against Imperial Fists and do so each round, but all Imperial Fists gain Hatred against you as well.  Nice and fluffy.

Iron Within, Iron Without: All units with VotLW gain a 6+ Feel No Pain (FnP).  A 16% increase in survivability for free is nothing to sneer at.

Patrons of the Technovirus: Obliterators and Mutilators are Troops choices.  This opens up some crazy builds.

Siege Masters: Units re-roll failed Armor Penetration against Buildings.  Havocs, Obliterators, and Mutilators get Tank Hunter! This is the real money.  While fortifications aren’t too common in the ITC, it is always nice to be able to pop Bunkers or Void Shield Generators (plus actually punching through void shields themselves) and giving your heavy weapon units Tank Hunters ensures that Obliterators and Havocs are punching through enemy armor. 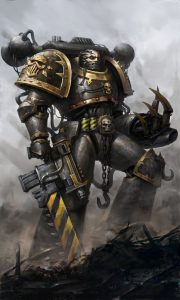 So, let’s get into the meat of this army here.  On the surface, it doesn’t seem as overtly powerful as Deathguard or World Eaters, but what Iron Warriors bring to the table is an uptick in survivability and some real consistency with Anti-Tank weapons.  The big key here that many people may poo-poo is that Obliterators as Troops provides an Iron Warriors Combined Arms Detachment (CAD) some great Objective Secured (Obsec) units that are designed to do what Iron Warriors want to do: blow up anything with an Armor Value.  This is where you will see Iron Warriors excel: allied in with another Chaos army as their own CAD with 3 to 4 Obliterator units that are Obsec, Tank-Hunter, and with a 6+ FnP. Suddenly, these slow, clunky shooters can camp objectives and blow up any vehicle trying to close in on it, and with a 2+ armor save, 5++ invulnerable save, and now a 6+ FnP roll, they are not easy to shift as other backfield campers.  Grav will eat them, but then Grav eats most other units in the game.  Let’s not forget that they come stock with powerfists, so if a smaller, fast moving unit tries to assault them out from an objective, they better have high initiative AP2 or Rending.

With no need to pay points for any of the Marks, larger squads of regular Chaos Space Marines can become a bit more difficult to shift as they have the 6+ FnP roll, and they are cheaper than many of the other CSM squads that the other legions can bring.  Never underestimate the power and annoyance of large squads that have layered defenses.  Of course, Havocs are a bit more reliable here too as even a squad with autocannons can now consistently strip hull-points from the ever ubiquitous rhino chassis out there. Havocs bring more consistent weapon types as opposed to the Obliterators who have to switch between their weapons each phase, and Havocs bring more firepower for less points, so they are still worth a look for a list that may lack ranged AT. 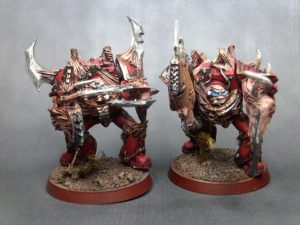 Wouldn’t it be nice to see the table?

Even the lowly Mutilator, so maligned (and for good reason) gains some much needed utility here. If taken as part of a CAD, they suddenly have Obsec, and like Obliterators, they can Deep Strike.  2 or 3 Mutilators that Deep Strike in and take an objective from your opponent isn’t too bad, forcing them to either focus fire or actually assault them.  Mutilators are not as expensive as Obliterators, so if you need Obsec, especially Obsec that can drop down into your enemy’s territory, they make a great compliment to many builds.  With Tank-Hunter and Chainfists, they are pretty much guaranteed to kill any vehicle in combat, assuming they get to swing at Initiative 1.  Hell, throw in a tanky lord, and you could have a relatively flexible assault unit that isn’t too much of a deathstar that pops into the backfield and really disrupts your opponent’s game plan.  Now that I ponder it: 2 lords, 2 max mutilator units is a single detachment that lets you drop 2 Obsec assault elements with a small footprint that are relatively resilient and fight like hell.  Not bad for roughly 550 points.  If coupled with the right army, that could be a really potent second or third wave that sets up the win on the mission.

So all in all, Iron Warriors may not have the same shine on them as some of the other Legions, and perhaps they are best relegated to a supporting role, but they have some moves that your enemy might not expect, and well, never underestimate 18 Obsec Obliterators with Tank-Hunter.  Of course, we’ll take a look at their specific detachment and see what kind of work a full Iron Warriors army can do in a later article, and feel free to check out my usual formation article on TFG Radio.

Iron hands with Obliterators… that would be something to see.

Thanks for point it out. I was so good in every other paragraph. And Iron Hands Obliterators would probably get Grav…

They would get a twin-linked grav gun and a grav cannon, no less. So they could spend every turn alternating between different grav profiles and wrecking everything.

I remember a while back seeing a tyranid list with lots of lictors winning a major tournament. The basis of it being that the lictors would deepstrike onto objectives while the fmc’s flew around killing things. I think obliterators, and mutilators can fill a the same roll now, and perhaps even better. While they may be 5-20 points more expensive then lictors they are objective secured which is a huge boon for a unit designed to drop onto objectives. The only real upside for the lictor is that it does not scatter when it deepstrikes. This can be mitigated with cursed earth since mutilators and obliterators are daemons.

I ran a list of 12 obliterators, 2 daemon princes, a lord of change, and a unit of pink horrors recently to great effect. Between the obliterators and summoning I controlled or contested nearly every objective all game long.

Seems pretty plausible- the Oblits give you some hard-hitting anti-tank and then hopefully the FMCs can wipe out the enemy infantry with Shriek or other tools. I would worry how it fares if you come up against stuff like Renegades, GSC, or other armies with a lot of bodies, however. Finding room for an Aegis Line for reserve manipulation would also be good, since you’re otherwise very dependent on the dice.

Oblits can have assault cannons. The bodies hit the mud like rain when that lands, especially if you have them pop out of escape hatches all over the table.

I don’t care for deepstriking these expensive units as much after I saw them come in on turn 4 a few games.

Also Coblen, Belakor/Fateweaver > than LoC I think. Have the CSM DP’s flying around fish for cursed earth.

An assault cannon kills like 1.5 GEQs in cover, and even a flamer is gonna have pretty limited effect. Being overwhelmed by an army like that is a very real possibility, especially because they will usually have superior firepower and superior endurance.

I am really liking the paradox artifact on Lord of changes. Since I want cursed earth I’m likely to end up getting incursion and summoning as well which becomes crazy with the paradox.

One thing I am very happy about, although I admittedly don’t play my Iron Warriors too often competitively, is that their decurion allows fortifications straight up.

It’s almost impossible to grab fortifications outside of CADs and sometimes it’s really hard to fit a CAD into an army that is already using a core + auxiliary.

I like to play reserves armies with oblits/Heldrakes coming in and the ability to include an ADL + comms relay in my decurion is appealing.

#Oblitshame the list has been born. I like the idea of 6-10 single oblits with some DPs and maybe the Fateweaver+LoC formation from 1K sons.

It’s worth noting that Obliterators and Mutilators will be able to use the Icons of Chaos Daemon allies to reduce their Deep Strike deviation to a single 1D6.

I tried testing out something similar in semi-casual play last year, only with Necrons instead of Oblits. I used Palanquin Summoners w/ Cultists, a Comm Relay, solo Oblits, and an allied Necron CAD with two units of Nightscythe Immortals, some solo Heavy Ds, and adding some Flayed Ones for horde control. Originally I used a Bargelord as my Warlord, but if were to do it again, I would probably switch it to Szeras, just for another S8 shot and improving the Flayed One RP, and maybe find points for a Munitorium Crate just so I could get Torrent Oblits.

Of course, GSC can now use cult ambush to ring around an objective in one go and lock down good portions of the board.

Is there a consensus yet on how the Technoviral Manipulator and Cult of Destruction rules overlap?

Specifically the warlord trait says “Friendly units of Obliterators from an Iron Warriors formation or detachment that are within 12″ of your warlord can choose to fire the same weapon in consecutive shooting phases.”

Whereas the Cult of destruction formation says the nominated unit Obliterators can fire twice in the same phase but can’t use the same gun and can’t use either of those weapons next turn either.

How do those interact? I assume the warlord trait overrides the second half of the Cult of Destruction meaning they can choose the same weapon in subsequent turns but does not override the restriction on firing the same gun twice in the same phase.

That was my reading of it as well.