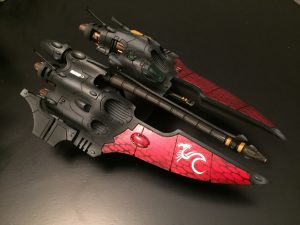 Zyekian here to discuss a unit that created quite a stir in the Warhammer 40K community when the Forgeworld IA:11 second edition book was released, but has garnered relatively little notice since: the Lynx.  Fast and powerful, it takes skill to use effectively without becoming an expensive pothole by turn two.  Read on for tips on how to get the most out of this not-quite superheavy grav tank!

And as always, don’t forget to check out Frontline Gaming’s Tactics Corner for more tips and tricks to make your army hum! 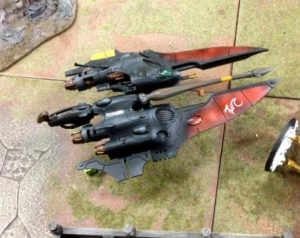 In case you were familiar with one of the earlier iterations of the Lynx, forget what you know and listen up.  It’s no longer a superheavy but a conventional vehicle (flyer, hover).  Checking in at a hefty 255 points, it has a 12/12/11 hull with an impressive five hull points.  Care is required when fielding this unit, as Lynxes are substantial pieces of resin on the table and can be challenging to move around dense terrain without triggering terrain checks you don’t want to make.

That giant gun is why we’re all here though.  The Lynx Pulsar is a devastating weapon with the following attack profiles:

Both options are useful, however the salvo is far better at focusing on erasing hardened targets.  Being twin-linked it’s likely that all three shots will hit, maximizing the chance of a six and overwhelming a knight’s shield.  On average a Knight will be a tattered mess after taking pulsar fire with a real possibility of being taken out in one shot.  Enemy models positioned closely together should be considered for the large blast mode, though the accuracy is diminished.  Salvo is just that good.

The Lynx will garner heaps of attention from the opponent’s army and its size makes it difficult to keep behind cover.  This means it will be jinking and otherwise forced to snap fire.  Again the Salvo pulsar comes in handy.  With three twin-linked shots there’s a 66% chance to land one D-hit while snap firing and a 22% chance to land two.  Those are fantastic odds that make the unit a bit more difficult to stop than at first glance.

Lynxes also pick one secondary weapon which is a stock shuriken cannon or scatter laser.  A bright/dark lance option is available for just +5 points while the Corsair version can select a splinter cannon out of the Dark Eldar codex for free; the Craftworld version may take a starcannon.  Most lists will feature a Lynx to target hardened units, therefore a backup lance weapon may be the best choice.  Avoid the 24″ range shuriken cannon.  The Pulsar is an ordinance weapon however, meaning the secondary weapon must snap fire.  Having 5 HPs means the thing may survive a while with the primary weapon destroyed so it may be more accurate to view the secondary weapon more as an insurance policy.

And for no cost the Lynx can exchange its pulsar for a Sonic Lance which is presently banned in the ITC due to being a hellstorm weapon with torrent.  It’s an impressive weapon in its own right, wounding on 3+ regardless of toughness with AP2, and a more mild S1+3D6 armor penetration hit versus vehicles.  The critical flaw though is that it cannot snap fire, relegating it to specific strategies which we’ll discuss further.  Mostly though it feels like an obsolete holdover from when the Lynx was a superheavy vehicle unable to be forced into snap firing. 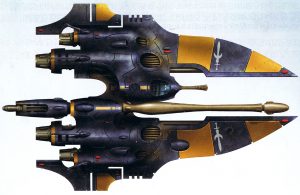 The Lynx is technically a flyer.  But it flies like a duck.  Its poorly-named Sky-Hunter rule states that when in zooming flyer mode it cannot jink and may only fire snap shots.  While in hover mode it counts as a fast skimmer with the tank type.  The Lynx may be deployed in hover mode, as it almost always will be, but may not switch to flying until turn two.  It also has the deep-strike special rule in both Corsair and Craftworld versions.

Switching to flyer mode and then zooming off the map can be good way to get out of a pinch.  And as mentioned before, the Lynx remains dangerous as a snap shooter so flying can be a wise strategy an likely one your opponent doesn’t see coming.

Craftworld Lynxes can select the usual Eldar vehicle wargear, most notably the holo-field for a 5++ save to help protect the points investment.  Where the vehicle really hums though is the Corsair version with a kinetic shroud for +15 points.  The shroud provides a 5++ invulnerable save against shooting attacks whenever the Lynx moves at least 6″, improving to 4++ when moving flat out.  Additionally when deep striking it gains a 4++ re-rollable save against shooting until the beginning of its controlling player’s next turn.  And that is superb. 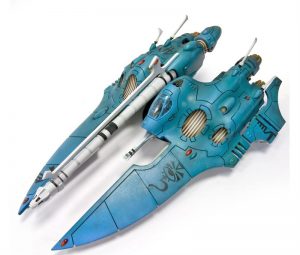 Eldar players will find it tempting to deploy their Lynx behind cover and use it to go bowling into the enemy ranks, and against certain opponents that may work.  Typically though the unit is going to be priority number one for the opponent to take out especially with drop pod melta and grav.  Five hull points feels like a lot, however the Lynx is prone to detonating prior to hulling out.  Ordinarily I’d point out how drawing fire with a frightening unit provides the advantage of dictating the opponent’s target priority but this thing it far too many points to really pull that off.

Clever Corsair players will run their Lynx with a Kinetic Shroud and deep strike it as part of a Sky Burners coterie.  This gives them a 1D6 scatter range and re-rolls to deep strike reserves.  That paired with the re-rollable 4++ means the Lynx doesn’t have to jink as it’s safe from enemy shooting.  It’s likely to get two turns of firing in without having to snap fire, scaring the space pants off large targets.  All said, this is likely the best way to assure the Lynx is worth its points.

When taken as part of an Eldar Warhost, 1-3 Lynxes may be taken as a Skyhunters Squadron, giving them a 4+ cover save the turn they arrive.  This is a “support” slot in the host, a Forgeworld-created slot that may be taken once per Core host.  This isn’t bad but it pales in comparison to the Corsair option. 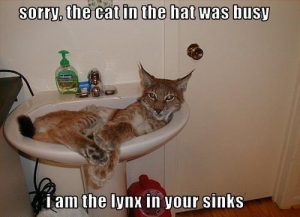 Overall the Lynx is a grav-tank with a ton of potential that needs to be handled with skill and planning to avoid being more than a 250-point crater.  It’s the kind of model that can make or break a match and isn’t for everyone.  What are your thoughts on the Lynx?  Is it viable in a competitive or semi-competitive format or is it best left to casual games?  Be sure to give your thoughts below on this fun and dynamic unit!