Hello everyone, this is your lord and savior Hotsauceman here to tell you about the one thing making dreadnaughts good again: The Lucius Pattern Dreadnaught Drop Pod. If you want to learn more, check out Tactics Corner for more fun stuff.

Like I said, this guy alone makes dreads good. It is simple, it is a drop pod that ups the dread’s defense and allows it to kill something at the very least. It does this with a few simple tricks, such as not requiring you to actually leave the pod, but still shoot out of it, and having built in defenses. It can be taken as a dedicated transport for any dreadnaught from Space Marines, Space Wolves, Dark Angels and Blood Angels. 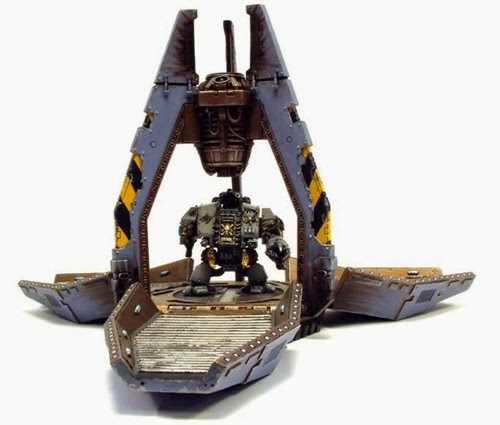 There is not a whole lot of actual fluff behind it sadly. Like the name says, it is from the ForgeWorld Lucius. The forges actually have a hard time keeping up with demand because these have a high destruction rate. Of course, one can infer that all drop pods have a high casualty rate, plunging from orbit, being immobile and unable to actually defend itself, and only retrieved when, or if, the battle is won.

You may be wondering what makes this thing so great, huh? Well, it is one thing – the Dreadnaught is not required to actually leave it. So when you come down you can shoot from the safety of the pod. You can then assault from it with safety. I wouldn’t bother with assault based Dreads because on the following turn, your opponent can easily move from assault range. But if you are facing a relatively immobile force, such as Astra Militarum or Renegades, it can actually do some real damage. Artillery is a big thing now for both those armies. So a Space Wolf Venerable Dreadnaught would be pretty good to drop near them and then assault because they are immobile. I would use this for a shooty dreadnaught like a Lascannon/Missile load out. In that case, I would drop them not too far back field, but enough to be safe and start plinking away. Reece used to have great success using the Lucius Drop Pod and a Siege Dreadnaught. With two flame weapons he would get it close and flame stuff with it. An Ironclad is great as well. With two Heavy flamers, it can rip things to shreds. But here is a brief overview of all dreads and their place when using the pod.

So, before I said that what kills Forge World models in this meta is formations. Well, there is a tiny little oversight that allow these guys to be taken in formations. Because formations do not restrict(barring a few) what Dedicated Transports you can take, all Dreads can take these in formations. But any benefits that name Drop Pods do not count. This may be a point of contention but I have yet to find something that contradicts this.  So, under this author’s interpretation, you can take the Lucius in the Gladius, you just don’t get them for free. Even though they are not free, they are still a boon in your army. Another fun one is in the Salamanders special formation: the Flame Blade Strikeforce. My god, an Ironclad with two Str6 re-roll to wound Heavy Flamers is brutal. Try experimenting and see if you can find some cool combos.

One final thing, there is a Legacy of Glory, “Burning of Prospero” you can take that allows the Lucius Drop Pod to not scatter.  Yes, it is half the price of the pod itself, but it removes a variable from the game. This upgrade is super fun and really allows you to get your dreads where they need to be.

So, there you go, an underappreciated model that I actually see gaining some traction in the tournament circuit. Have fun and remember to share your opinions below and Frontline Gaming sells Games Workshop product at up to 25% off, every day.

Can the lucius pod only be taken as a dedicated transport or is there a way to get one as a fast attack choice?

I looked and not really. This was 6th edition, before the whole “Dedicated transports can be taken as FA slots” thing started with the space wolves codex.

Angels Blade Strike Force with an Archangels Demi-Company. 2 Frag cannon Furioso Dreads in Lucius Pods which only scatter 1d6. Stay in the pods and flame away. Next turn get out and do it again and charge.

Has anyone come up with a good way of converting these from plastic drop pod models? They’re pretty expensive.

No. But there are some templates to make some out of cardstock and cereal boxes. Google Santa Cruz Warhammer. They will have a tutorial on how too.

I thought FW FAQed the Helical Targeting Array so if you remained stationary, you could choose whether or not to use it.

It was a really fast game.

With slightly different play and against other armies, this formation would have been really really brutal

Nids can do horrible things to Dreads in Lucius Pods as well, with those Haywire Templates that just about every Flyrant is flapping around with.