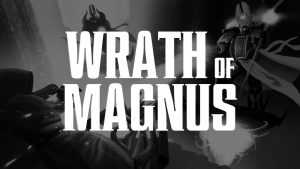 Hey everyone, Chandler here.  As everyone knows by now, Chaos Space Marines players the world over got a huge gift in the form of Wrath of Magnus (and the upcoming Traitor Legions supplement).  This is the first time we’ve ever seen a Primarch hit the table tops in games of Warhammer 40k and Magnus is an absolute beast! In this article I’m going to review one of his new Formations from Wrath of Magnus; the Rehati War Sect.  For more reviews, analysis and battle reports, check out the Tactics Corner. 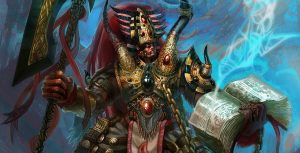 Overview: The Rehati War Sect Formation consists of Magnus and 3-9 either Daemon Princes or Exalted Sorcerers.  They get the lackluster Favoured of Tzeentch special rule, giving them the ability to re-roll failed saves when taken with the maximum units, as well as the Court of the Crimson King special rule which lets all the units manifest warp charge on a 3+ when within 18″ of Magnus and all units have line of sight to every unit on the table. That’s a huge boost!

At first glance this Formation doesn’t pass the eye test because of it’s point investment, and certainly that is a matter of concern, but what if this formation made up most of your army? That sounds crazy I know, but let’s take a look at it: 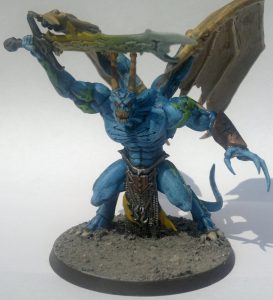 Tactics: So, how does this list work? By dominating the psychic phase with witchfires, summons, and buffs.  You’re getting a massive 21 psychic dice before rolling in the psychic phase!  One Daemon Prince will be used as mainly a buffer and summoner in this list.  It’s not a guarantee that you will roll the powers you need, but at the very least you’ll be able to get Summoning as it is the Primaris.  You’re rolling on Malefic here primarily looking for Cursed Earth.  It is a Blessing with a range of 12″ and serves two purposes: First, to improve the Daemon Princes invulnerables by 2 because of the Blessing of Tzeentch special rule giving them all a 3++ re-rolling 1s and Magnus a 2++.  Second, so that your summoned units won’t scatter and mishap.  Harnessing warp charge on a 3+ with a re-roll because of the Spell Familiar means you’re very likely to pass your summons most of the time without having to throw a massive amount of dice at them.

The Chaos Daemons CAD here also gives you an even greater chance of getting Cursed Earth and various other Malefic conjuration powers.  Keeping the Pink Horrors at 11 man units means they will generate 2 warp charge per unit.  In addition, you’ll be summoning more Pink Horrors with this list, obviously to improve your warp charge pool as the game goes on, but also because of the powerful Split rule.  As your Horrors run around the table and take enemy fire, they will further split off into blue and brimstone horrors giving you even more dice in the pool.  And if your opponent wants to prevent this, he’ll either have to ignore them or dedicate resources to assaulting them.  That’s where the other Daemon Princes come in. 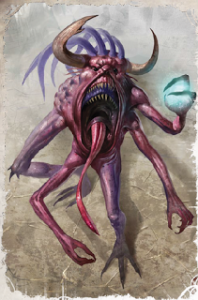 At least two of the Princes will be dedicated to Biomancy, Tzeentch, and Telepathy.  Throwing around powers such as Treason of Tzeentch, allowing you to take over enemy units and shoot with them which is incredibly powerful.  The Athenaean Scrolls are important because as long as you roll doubles on your psychic tests when targeting an enemy unit with a Witchfire or Malediction your opponent won’t be able to deny you, which is nice when you are facing off against another heavy psyker based army.  Tossing Invisibility on summoned horrors, or the daemon princes themselves making them that much more difficult to deal with.  Buffing up with powers like Warp Speed, Iron Arm, and Endurance on the prince with the Staff of Arcane Compulsion equipped makes him a brutal unit.  +2 Strength swinging at AP2 with Force makes him a very scary opponent to deal with.  The Repelling Sweep special rule will also provide him with some control against enemy units attempting to charge him.  For 10 points this seems like an auto-take for a Demon Prince! Add the benefit of the Blessing of Tzeentch and these guys become even more difficult to kill.  These two princes stay on the ground and counter-charge units threatening horrors, or go on the offensive themselves blasting the enemy with witchfires or charging up the field.

Magnus acts as more of a flying gunship in this list.  You will primarily keep him in the air making use of his massive volume of Witchfires from the Change discipline as well as the two D shots he can shoot per psychic phase at different targets! You can even use him to summon in Flamers of Tzeentch to harass and distract the enemy.  Flamers can still be pretty good, especially when you summon them across the table after flying 24″ so they can toast those pesky cheap troop units lurking in ruins.  He does not have many blessings to buff himself and obviously Siphon Magic is a good choice, but if you get Cursed Earth off you can instead spend your efforts focusing on what he does best, which is blasting the enemy with strong psychic shooting attacks.

There are, or course, a few drawbacks to running this list.  Alpha strikes will hit this army hard, but some of it can be mitigated.  For example, in this list you don’t put power armor on the Princes.  They don’t need it as they’ll be rocking 3++ invulnerable saves for most of the game.  This means that Graviton weapons will be needing 6s to wound them, which is pretty important as grav is so instrumental in the meta.  Bubble wrapping the Princes and Magnus with the Horrors is a good way to avoid the alpha strike as they’ll have to chew through lots of Pinks, followed by Blue and Brimstone Horrors after.  Horrors and their Split rule are vulnerable to assaults.  Because of the new FAQ you need to be able to place an entire unit of Blue/Brim Horrors within 6″ of the last model before it is removed from the table.

Obviously, this list needs to go first to really get the most out of it, but 3 Daemon Princes and a Lord of War aren’t exactly easy to kill on turn 1.  You’ll mainly want to protect your summoning prince as he is the one that will really make the difference as far as being able to score objectives, etc. Reserving him on turn 1 and flying him on later might not be a bad idea.  Destroyer weapons, primarily of the ranged variety, are also a big issue.  A lucky hit with a D weapon can smoke these guys, as well as Strength 10 hits, so keep that in mind when playing the army.

Having to roll at least one power on the Tzeentch table because of the Daemon of Tzeentch rule will limit the army’s effectiveness a little, but with the new powers in Wrath of Magnus suddenly what used to be the worst of the psychic trees is arguably quite good.

This Formation probably isn’t ready to dethrone the Infernal Tetrad in power, but it can still be quite good.  Magnus is a massive point investment, but his ability to effect multiple targets with witchfires and D shots makes him almost like a GMC in power.  He’s well worth every point and can put up some massive damage especially once he gets in the air.  And if forced to fight in combat, he’s not too shabby either rocking Strength 8 AP 2 on initiative with an Instant Death weapon that can spawn an enemy.  You’ll want to avoid getting him into combat with things like Imperial Knights or other AV 13 walkers as he will struggle to kill them and while he’s in combat he can’t make the most of his shooting abilities. 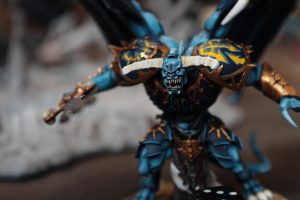 The Rehati War Sect isn’t going to win the LVO anytime soon, but it can be a very strong and fun Formation to play and quite difficult for a lot of opponents to deal with.  Magnus is capable of wiping out half of an army on his own, and with the summoning power of the Princes you’re looking at getting a lot of extra points on the table.  Horrors will be a nightmare to deal with even with the sudden nerf to the Split rule and you can summon them en masse with a Rehati War Sect.

Personally, I’m quite happy with Wrath of Magnus and the upcoming Traitor Legions supplement.  Chaos Space Marines have been in desperate need of a bump up on the power scale, and these new Formations, along with Magnus really help provide the army with the boost it needs to keep up with today’s meta.