The Ninth Realm #21 Interview with a 40k Convert 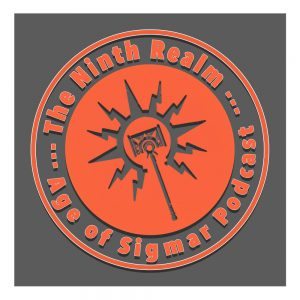 In this weeks episode Reece is joined by Ben Mohlie an avid 40k tournament player. They discuss the differences between the two games, and some of the reasons people are converting over.

Great interview guys! I’m blown away by how far AoS has come in only a year. I’d KILL for you guys to do more coverage of AoS games on FLG, maybe alternate them in to your weekly streaming. While you’re at it, get to streaming some BB games! 🙂

Like you said, simple to learn, difficult to master. The complexity is in the interaction of your units and your strategic choices, not in the core rules of the game.

The counter-point I’d make to your core requirement suggestion is that requiring 3 separate units means if you want to take advantage of some of the special rules on bigger units, you’ll have to invest more than the minimum number of points on Battleline. If you can combine them into a single unit, you’ll rarely see anyone spend more than the absolute minimum on Battleline.

For double-turns, I would suggest going to go watch the Sylvaneth vs Chaos battle report that they did on Warhammer TV (Day 2, game 1). The Sylvaneth player had the opportunity to give the Chaos player a double turn on Turn 2, but decided not to, and that was probably his biggest mistake. If he forced the double turn on the Chaos player, he would have lost a couple cheap units, but would come on the board with the rest of his army safely, additionally, it would prevent the Chaos player from getting the double turn later in the game when it would be more impactful, and give himself the opportunity for a better double turn. If Chaos had the double, they’d have moved up and charged, which would have let the Sylvaneth player pick better match ups for his own units to counter attack.

Glad you enjoyed it =)

Its good to see some of the big names of 40k accept Sigmar into their life as our lord and savior lol. Id suggest you check out the facehammer podcast if you want to learn about the meta over in england and just highlevel play in general. There is definitely a meta evolving atm. Sayl the Faithless is a core chaos wizard(chaos tiggy). He is a forgeworld unit and his spell makes a unit fly 16″. Pretty nasty when cast on a unit of 6 stormfiends with warpfire that do 12d3 mortal wounds at 8″ range and can then charge and club whatever is left to death.

It was yet again another great show. I personally enjoy the niche that different armies have. I can’t wait to get enough of a brayherd to have large units of gors and ungors moving across the field at high speed and hopefully killing stuff.

Glad you enjoyed it! Always a pleasure talking to Ben, and I was excited to get his insights into the game.

I too am tempted by the call of the Beastmen! We have a Ghorgon on the shelf waiting to be finished and I love those Minotaurs. I am very tempted to put together a Beastman army…

Oh I understand that lol. I just need 50 gors, 110ish ungor raiders, 2 cygors, and 18 more minotaurs. Then I can start my squig army!

Not yet but soon. I’m only at 2 doombulls, 3 ghorgons, a cygor, 18 great weapon bullgors, 2 brayshamans, a beastlord, a banner bearer, gorthor, 5 chariots, 40 gors, 40 bestigors, 10 ungor raiders, 5 giants, a jabberslythe, a chimera, and that may actually be it for now. So on second thought I guess I don’t do things half way…. I am an ork player though so this is tame…

I agree with a lot of what was talked about on the episode. I think Sigmar’s biggest strength, as you guys mentioned, is the simplicity of the rules. Simplicity isn’t bad – a lot of people like to say “lol 4 page rules it’s a stupid game”, but honestly with the way the rules are I can count on one hand the number of times we’ve had to look something up (not on a warscroll). Compare that to 40k – I can’t remember the last game I had where someone didn’t have to open a codex and the BRB to cross reference some rules. It happens *all the time*. And that’s fine for 40k, it’s more complex and is a different game. Complexity also isn’t bad.

But what drew me in is the fact that it’s super simple to just meet up and play a game. The rules fade into the background while you roll some dice and have fun, with a few unit-specific exceptions.

It’s great to see an experienced 40k player enjoying the game. I was a fan of Ben’s lists since I’m personally a Necron player and look forward to seeing some of these competitive players bring their expertise to the meta.

Agreed on all counts.

As a competitive AOS player I think the best armies are Seraphon (Kroak with Balewind Vortex) and Tomb Kings (Settra and Necropolis Knights).

I don’t think there is an unbeatable army but those two definitely stand out to me.

What is so good about kroak? What else do you take?

Hey Reece, That take and hold mission where Frankie one on the first turn was misplayed. You can’t score that until minimum turn 3. Tell Frankie to stop cheating and that one doesn’t count lol.