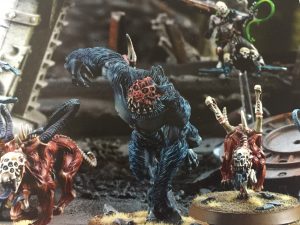 Zyekian here once again taking a look at what Codex:Dark Eldar has to offer, scouring for hidden gems in the rock pile.  This codex is full of odd and wonderful units, many of which are virtually unseen on today’s tables even in casual matches.  The reason for this likely has more to do with many of these models being expensive finecast models than the rules themselves because as we’re about to see Beastmasters can be very effective in a Dark Eldar list.  And as always check out Frontline Gaming’s Tactics Corner for more reviews and tactics on your favorite 40K units!

Beastmasters are the twisted remnants of an ancient Eldar shamanistic tradition wearing the masks and garb of the predatory beasts under their control.  They hover upon skyboards controlling their packs with pheromones and sonic emitters, working them into a vicious frenzy during a raid.  In addition to the Beastmasters themselves, each of the three beast types has its own unique profile which we’ll explore in detail.

Notably all beasts including their master count as beast infantry types.  This means the master’s skyboard is not jump type like a Hellion board so they may not make hammer of wrath attacks.  These units lack assault grenades, however their durability and general low point cost can pull them through.  Beastmaster units consist of between 1-12 models in any combination which gives plenty of flexibility for the different roles they can fulfill. 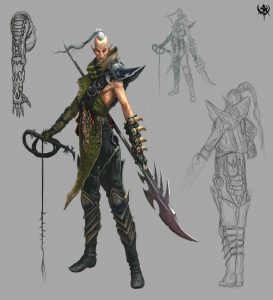 For just 10 points Beastmasters have a typical Dark Eldar stat line and quick like a Wych. Wargear consists of the skyboard which has a splinter pod, a formidable 18″ assault 2, poison (4+) gun, and a close combat weapon.  While that single CCW grants nothing in itself, it does open up an extra attack if a master takes a power sword or Agonizer upgrades.  The Agonizer is a potent weapon, a poison (4+) AP3 power sword. Though expensive at 25 points it could be considered in a large Pack unit in an assault list.  Most players will opt to run stock.

Beastmasters are an exceptional deal.  In fact they’re better values than Kabalites and Hellions, filling the role of inexpensive harassment unit that can remain in cover and dart to objectives.  60 points is about where MSU units check in at in the Dark Eldar army; a pure-Master unit at that level will bring a dozen poison shots with superb mobility to the table.  They’ll hit like a Venom for five less points.  And like all members of their race this unit comes with Night Vision and the Power from Pain special rule which enhances their survivability as the game goes on.  A real gem for the points. 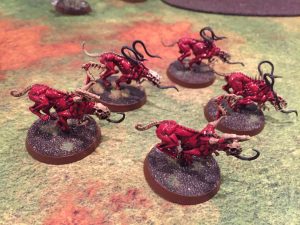 Under-costed at a mere 10 points, Khymera are quietly one of the more underrated units in 40k.

Khymera have the Daemon special rule giving them a 5++ invulnerable save on top of their Space Marine toughness.  With four S4 attacks on the charge, striking on the initiative of a Harlequin, bounding 12″ per turn, sitting on large-footprint 40mm bases, Khymera are an absolute steal.  Their large footprint and potent long-range assault capability make them a real presence on the table with utility in a range of roles.  And with Genestealer Cult coming into the meta their stock could rise even further as a cheap foil to Cult assault units.

If there’s one thing lacking here it’s the Dark Eldar Codex’s lack of mobile HQs to compliment this unit to enhance its leadership.  Corsair Barons and Princes on jetbikes kitted out for assault will excel in a pack of these creatures though, as will an Autarch with Banshee Mask to shut down overwatch.  Highly recommended. 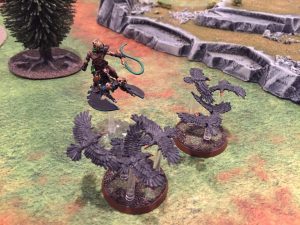 Possibly one of the most obscure models in all of 40k, Razorwing Flocks check in at a more weighty 20 points with some truly odd attributes.

Flocks are somewhat of a mess.  They bring a high volume of low-strength attacks that fish for rending wounds.  Dismal weapon skill means they’ll need to roll a 5 to hit many dedicated melee units.  Their real struggle though is being doubled-out by S6 wounds though, hampering their potential to soak wounds for the rest of the pack.  The Swarms rule just makes things worse.

The best way to run a flock is by dropping a single model into a larger pack of Khymera or a mixed unit, being careful not to tilt the majority toughness back to ‘3’.  The one thing they bring to a Pack is the ability to bypass armor saves, something none of the other creatures have.  Keep the flock in the back against high-strength opponents and maybe they’ll pluck something’s eye out. 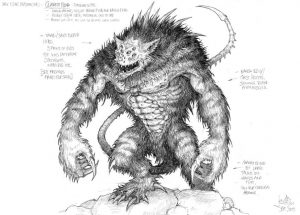 Space Apes for 30 points.  The tails on mine simply refuse to stay glued on.

Clawed Fiends are hulking meatbags with six poweful monkey punches on the charge.  They’re best used tilting a unit to T5 majority and staying in cover, as their 6+ armor isn’t doing them any favors.  Fiends are therefore best off rushing shooty units not equipped to deal with them in close combat.  The main problem Clawed fiends have is that they’re not Grotesques though, and suffer from a bit of role confusion in the Dark Eldar army.

A word on effective Beast Pack builds run in the Dark Eldar community.  This list isn’t anywhere near exhaustive, just some builds that I’ve personally had success with or have a reputation for success.  Remember also that the Realspace Raiders detachment opens up six FA slots to enhance MSU assault potential.

Khymera MSU – Packs of five-ish Khymera with a Beastmaster.  20+ S4 attacks on the charge, dirty cheap.  Can put 2-3 HP on a Rhino.

Khymera Footprint – 11 Khymera, 1 Beastmaster to whip them.  Drop a Flock in for rending chances and to potentially soak wounds vs certain opponents without losing a model.  Works as bubble wrap, board presence, buckets of attacks for a mere 120 points.

Beastmaster Clique – Five or six Beastmasters in a unit, sticking to cover and peppering opponents with poison wounds.  Costs about as much as Kabalite Warriors except extremely mobile and not hampered by rapid fire cutting their shooting in half.  If it can stick around for a few turns to get FnP it becomes resistant to small arms fire.  The unit easily reaches firing points in upper level ruins.

Menagerie – Various combinations of creatures set up in such a way to express each one’s strengths.  Two Fiends, two Khymera, one Beastmaster, possibly with an upgraded melee weapon.  The unit is T5 with considerable melee punch for 90 points.  A good well-rounded unit.

Codex: Space Ape – Cut those Apes loose!  A fiend running solo sticking to cover, grabbing objectives, assisting in assaults, soaking overwatch, and punching up Rhinos and Warp Hunters can be very effective for its points. It takes an average of about 10 rapid-fire bolt guns to drop an Ape with a 5+ cover save so they’ll require meaningful attention to remove – and yet can’t be ignored.  Their leadership is dirt but they’ll never have to make a check from shooting casualties. 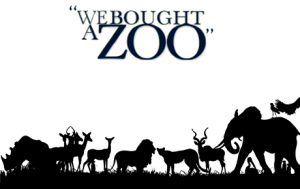 What are your thoughts on Beast Packs?  Are they unseen for a reason or is there real potential here in today’s meta?  Comment down below!  And remember, Frontline Gaming sells Games Workshop product at up to 25% off, every day.