Your friendly robotic pal who’s fun to be with, the Drone Squadron! 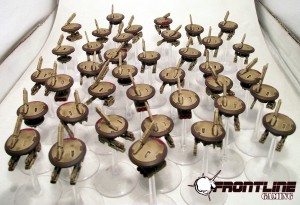 Drones are most typically seen in Tau armies either as part of another unit (e.g. Crisis suits) or included in the price of another squad (e.g. Piranha skimmers.) In fact, it can come as a surprise to many that Drones are available for purchase as a unit on their own, but the option is right there in the codex. Though a somewhat niche unit, it has gained some significant strength from new formation options and when paired up with the right units it can provide excellent support for an army.

Drone squadrons have exactly the same profile as drones taken anywhere else in the codex- Toughness 4 and 4+ armor provide them with reasonable survivability, although with only Leadership 7 they are fairly likely to run at the first sign of trouble. A surprisingly-high Initiative of 4 means they can do a lot better in combat than you might expect, but Strength 3 means they won’t fare well against MEQs or other tough opponents. Ballistic Skill 2 is a big limiter on their damage output, but many other factors can help to obviate it so it’s not nearly as bad as it seems at first glance. When taken on their own, drones are actually slightly more expensive than their counterparts in a battlesuit squad, being 14pts rather than 12pts for some reason; however, with a squad size of 4-12 you can potentially fit quite a few of them into a single slot when needed.

Drones come in three basic varieties- Gun, Shield, and Marker. (Many other drone types exist in the codex, but they are not available to be taken in the squadron.) All drones share the same special rules- Supporting Fire and Jet Pack Infantry status- and are the same price, with the ability to freely mix the different types in a single squad however you please. Gun Drones come with a twin-linked Pulse Carbine (18″ S5 AP5 assault 2 pinning); while it typically is an inferior gun to the other Pulse weapons, it still has a pretty good statline and the natural mobility of the unit makes its limited range somewhat less of an issue. Pinning, which is an exceedingly rare trait in weapons nowadays, is actually one of the big upsides- even a single wound getting through on a unit will force that Leadership check and potentially shut them down for a turn.

Shield Drones trade their weapon for a Shield Generator, giving them a 4++ save. Since their armor save is no better than that of other drones, they don’t actually end up being much harder to kill for the most part- and since they have no direct way to contribute to a battle (being without guns and very poor in close combat) there is very little reason to make much use of them. The combination of wound allocation rules (you can’t choose who takes the hit), lack of combat ability, and identical price condemns Shield Drones to be largely useless; I have never actually seen a player field them in a squad in the many years I’ve played the game.

Marker Drones come with a single Markerlight, as one might expect; without any enhancements they are a rather inefficient proposition, since BS2 means they will only score a small handful of hits even at the best of times, but as previously noted there are plenty of ways around this factor. Probably the most important thing about them is the fact that, unlike most other Markerlight sources, they are quite easy to conceal- the relatively small size of the drone models combined with the ability to fire their guns on the move (thanks to Relentless) and the Thrust movement from being a Jet Pack means that it isn’t hard to hop out, light up an enemy unit, and then jump back to safety before the enemy turn. Where many Markerlight units are easy prey for incoming return fire from the other side of the table, Marker Drones can often expect to stay protected for a significant time. 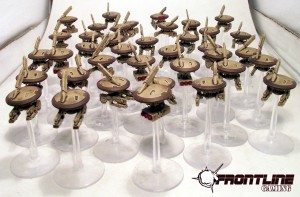 So Drone squadrons are not, for the most part, a particularly-exciting unit at the start. With a mediocre statline and points cost they don’t seem like they would see much use, but the truth is they actually see play in a number of high-tier Tau armies due to some niche advantages.

A big part of this is because of the existence of the Drone Controller wargear. Available to any battlesuit, it lets all drones in the squad use that model’s Ballistic Skill- and for a Commander, with BS5, this is a tremendous jump in accuracy. A squadron of Drones is cheap at 56pts and is the easiest way to bring a bunch of accurate Markerlights in an army, especially since the Commander has four wounds to shelter the Drones when necessary. Although many players expand on this and instead take a Crisis team (purchasing the Marker Drones as a part of that squad) so as to gain more firepower at the same time and in the same unit, this is a much more points-intensive option and for lists that are already stretching themselves thin (such as a Stormsurge/Riptide army) it simply may not be viable.

Of course, Marker Drones aren’t the only ones who benefit from a Drone Controller. Gun Drones do also, and a full-sized squad of them accompanied by a Commander is throwing quite an impressive number of hits onto most units. While this option is probably not fit for any kind of tournament army, it can be an amusing thing to try and when arriving from Deep Strike is a nasty surprise for a lot of players.

Of course, the most common way players will encounter Drone squadrons is ones that have disembarked from a Tau vehicle. Since these units do not count towards mission objectives either in a positive fashion (such as by holding/contesting an objective) or a negative one (such as awarding VP for being slain by the enemy), they will almost always be treated in a wholly disposable manner. These Drone units will be either two models strong (when coming from a Devilfish, Hammerhead, or Skyray) or 2-10 models (when coming off of Piranhas) and will commonly use their Jet Pack moves not to move into safe positions but to scoot forward into the enemy’s face, blocking off movement/charge lanes and otherwise getting in the way and demanding attention. As they are essentially worthless to the Tau player and valueless to kill for the enemy, they can make a significant nuisance of themselves before the opponent finally resigns themselves to the need to kill the unit regardless and spends some firepower on it.

There are two easy mistakes to use with drones; forgetting about the Pinning rule on their guns is the first. While units that are immune to Pinning (MCs, bikes, etc) are quite common in the game, they are not omnipresent and most basic units in most armies are vulnerable to it. Some, such as Orks and enemy Tau, are exceptionally so, but even oh-so-fearless Space Marines can be tied down for a turn on a failed check. As a result, it’s important to make the enemy roll the dice every time- Pinning triggers on any unsaved wound (even if it doesn’t kill a model) and is rolled immediately rather than at the end of the phase like a morale check. Moreover, you can force multiple Pinning checks on a unit in one turn if you have several drone squads.

The other easy thing to do wrong with Drone squads is to be too careful with them. Drones aren’t quite a glass cannon, but they shoot well above their ability to take damage so it pays to be proactive with them- and this includes sometimes declaring charges. While they may be fairly shoddy with only S3 and WS2, a larger unit (6+) on the charge can easily bonk the enemy into submission- the so-called “Frisbees of Death” strategy. Your ideal target is something with T3 that you can wound fairly easily, but if there’s only one or two Marines left in a squad it can pay to go for the charge, since if you don’t they likely will.

One other option we haven’t discussed yet is formations, of which there are two reasonably-noteworthy entries. The Hunter Cadre is one, where Drones can fill the required “FA” slot in the formation; though they don’t have any standout abilities within it, they can be a good contributor to a Combined Fire attack. The VX-1-0 Drone Network, on the other hand, is a big boost to the unit, giving them all a plethora of special rules as well as +1BS.

Drones are pretty omnipresent across the Tau codex, but actually seeing them in a unit by themselves is somewhat unusual. Still, the unit is fairly passable even in the worst of circumstances and with some well-chosen options it can do quite a lot for you.