Ah, the good ole Land Raider and the Redeemer and Crusader variants are up for review today. Deemed one of the strongest tanks the Space Marines have to offer according to  fluff and the codex description. But, in-game it does a complete 180 and does not fare well against models that were cast alongside it. For more reviews, battle reports, tactics discussions, list building methodology, and analysis check out the Tactics Corner!

At first glance the Land Raider and its variants seem like  pretty solid options with their large-scale, armor value, and transport capacity. But then you look at the points and remember that anything with AV that is not a super-heavy will have issues in the current 40k game edition. I personally like the look and aesthetic of the Land Raider, however, fielding one on the tabletop just hurts my soul and makes me Emperor Saltatine. Since Grav is king, the Land Raider lives in a continuum of  disappointment and shattered dreams. Pretty harsh, I know. 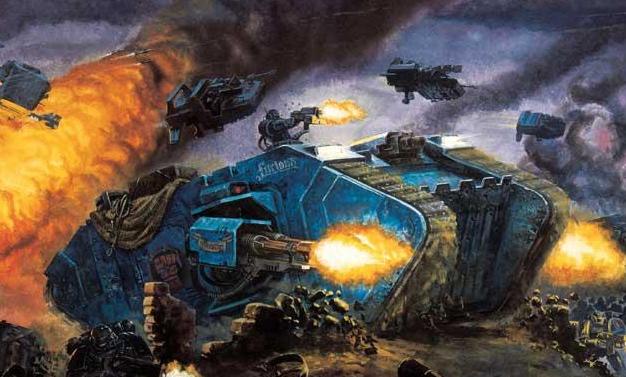 Man does it look boss!

The Land Raider and its variants are ground transports that have 14 AV on all sides, 4 hull points, and have the ability to carry larger sized infantry (Terminators and Centurions). They act as the Cadillac Escalades for delivering your infantry into close-range shooting or close combat. It is the only Tank in the Space Marine tank to have the “Assault Vehicle” special rule. This of course comes at the heavy price tag of between 240 to 250 points. The three options to field the Land Raider bring different guns and transportation capabilities to the fight. However, because you want to deliver your cargo as fast a possible, shooting all of the Land Raider weapons at full ballistic skill will not happen. It also suffers from having no fire points for your models inside. If the Land Raider enabled models to shoot out from it, it could be a decent firing base that can get you from point A to B if needed. But alas this is not the Land Raider Games Workshop wanted to give us.

Additionally, Land Raiders can take a Multi-Melta as an additional weapon and can take options from the Space Marine vehicle upgrade list. However, they cannot take dozer blades……  This is a big problem for Land Raiders, as no player wants to see and witness a 250 pt tank be immobilized to a rock on turn 1. In the tactics section I will discuss which Land Raider variant is the best option

Land Raiders are not compelling when it comes to its firepower. With Power of the Machine spirit you will always be able to shoot one weapon at full BS, but it is not really that good to dedicate Land Raiders as tanks designed to kill other threats on the tabletop.  The best anti-tank you can get on a Land Raider of any variant is a Multi-Melta, which will most likely need Power of the Machine Spirit to shoot or will snap fire. By rules design the Land Raider and its variants have a hard time shooting its weapons efficiently. If they were able to shoot all their weapons at regular BS like a Leman Russ, the Land Raider’s tabletop uses would be greatly enhanced. But not enough to deem it tournament worthy.

They also lack, like most armor-based models, any kind of guaranteed save. The only thing is the smoke launcher which gives you a 5+ cover save for a turn, but the Land Raider has to sacrifice shooting for that turn. Since Land Raiders lack durability you need to shield it with other layers of other vehicles to prevent clear shots at it. Not being able to take Armored Ceramite (immune to the Melta extra d6 rule) and some way of ignoring immobilized results caused by Grav, the Land Raider is ironically a delicate unit that cannot Rambo its way up the battlefield like a Biker Star. The standard Land Raider wants to stay far as possible to shoot its lascannons, but it also wants to move forward to deliver its passengers. The Redeemer has the Hellstorm flamers which are Strength 6 and AP 3, but lack torrent. This does not work all to well when attempting to grill up some units in front of you, as the flamers are position relatively close to the middle of the Land Raider. The overall design of the Land Raider does not match its fluff or even a coherent way to play it effectively. Black Templars have access to Objective Secured Land Raiders via the Crusader Squads, but do you really want something that points taxing to sit on an objective? The clear answer is NO!

The best Land Raider variant in my savage opinion is the Crusader. This is because it has the largest transportation capabilities a decent amount firepower that can go through light infantry. The Frag Launchers are also nice for combat units who do not come equipped with frag grenades. Taking a Land Raider really boils down to delivering quality infantry into combat or in a position that gives them the best threat range. The Land Raider is already costly, and will only become more expensive with the unit you want to put inside it. Having 500 pts move around the board with such low survivability is really sub-optimal tactics, and will make you rethink your entire 40k career. Never put all your Marines in one Land Raider.

Additionally, GW is so confident in the way that they designed the Land Raider’s rules that they want you take three in any combination of the three variants! This is called the Land Raider Spearhead formation. The Land Raiders act as pseudo Super-Heavies being immune to all of the vehicle damage chart except the explosion result. And they get to re-roll failed wound rolls and armor penetration rolls against Gargantuans, Super-Heavies, and Mighty Bulwark Buildings…… This formation is too costly to do anything good on the battlefield, and if you are going “Big Game” hunting with these tanks you are doing 40k wrong. 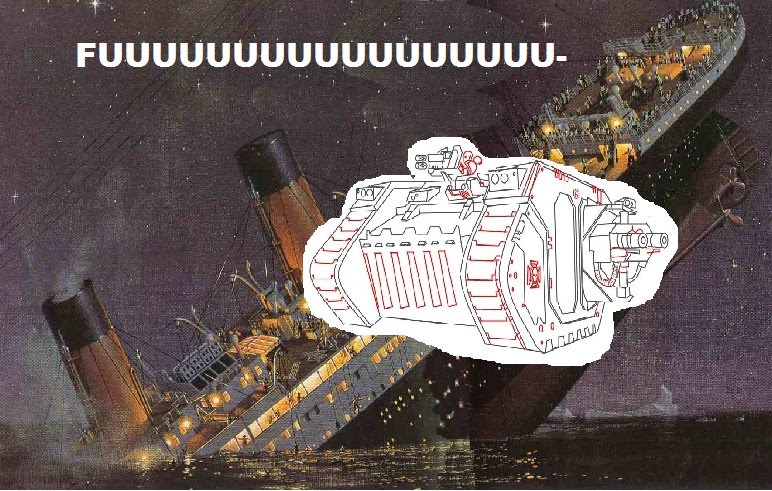 Your reaction to fielding a Land Raider.

Units that can work well in a Land Raider Crusader are Assault Terminators, Centurion Devastators, Vanguard, and Assault Centurions. In any of these units I would accompany them with an independent character to give them defensive and offensive buffs (Librarians and Chaplains). While these are the better options to put in a Land Raider, there are better ways to move troops across the battlefield (drop pods, deep strike, levitation psychic power, and Storm Ravens).

The Land Raider and its variants really suffer in the current rules set, because of the proliferation of Grav. However, it suffers from more than just being a byproduct of rules edition swings, its own rules and overall model design are flawed (just look at the Land Raider Redeemer). When someone tells me they are considering they are taking a Land Raider, I will always respond that there is something better for your army. The Land Raider as a whole needs to be reworked to be really considered for competitive play. It can only perform decently armies that cannot deal with heavy armor. But even then, you are still investing 250 pts into a box that could be put into something else like a Librarius Conclave. This unit is not McSavage approved. But, if you want a Land Raider worth looking at, please consult Forgeworld.

Berent McSavage is a devoted 40k player who looks to optimize savagery by all means necessary. He plays in the Greater Toronto Area, and does his best to spread the savagery. In the future he wishes to be a Grav Cannon.
View all posts by Berent McSavage →