Heyo everyone, this is Hotsauceman here to tell you about one of my favorite units in the codex and one of the best units for their price you can get. Remember, if you want to get Reece into a dress, check out the Tactics Corner for more fun stuff 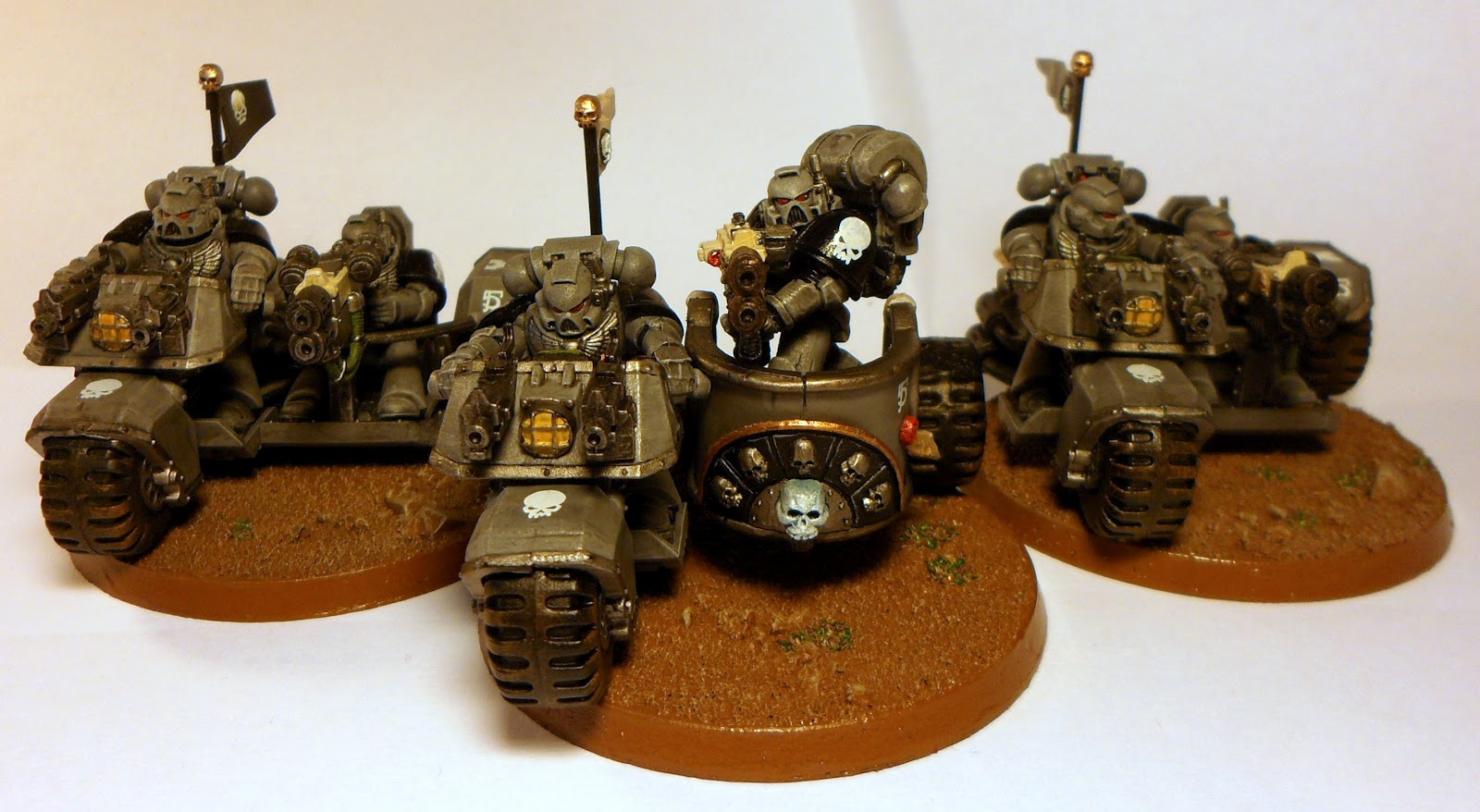 There is not a whole lot of fluff behind these guys. They are just bikes with a side-car attached. Nothing special.

The Attack Bike Squad is a cheap unit that is deceptively better than it seems. Clocking in at 40pts stock, you get a 2wound bike that does more than you think it would.  Being able to fire two weapons each is something that is very good as well. Ok, so at just 50pts for an Attack Bike with a Multi-Melta, this guy is pretty good. Now you have to be smart with this guy or it won’t actually do much. He is cheap enough that you will not mind losing him. But annoying enough that your opponent will have to divert attention to kill it. One thing I find is you hide him in a ruin and run out to catch your opponent by surprise. People will often forget what they cant see. So hide him and pounce when the time is right. He is also good for running around capturing or denying objectives with a 24 inch move, you can get to nearly any objective on the board when the time arises. The reason you want to take him in small one bike units is simple. You don’t want to make them more of a threat than they are. A Relentless Multi-Melta is pretty strong even if it is one shot. Now, What chapter tactics work good for this guy? Obvious example is White Scars. +1 to Jink saves keeps this guy around longer. But being able to ignore terrain is the biggest, makes sure you don’t take any wounds when zipping around. While these guys do not have much in assault power, having a Strength 5 Hammer of Wrath is pretty good. but just one of these guys assaulting is not the powerful and such one hit will not do much. Maybe you can assault small vehicles with few hull-points to make it worth it.   Not to mention outflank when brought with Khan. I have had so much fun just outflanking Attack Bikes and just one-shoting vehicles with the Melta.  Another OK chapter tactic is getting a master-crafted on the Multi-Melta. Not the best because it doesn’t have an army built around it, but it is still solid. Stick with the White Scars. Now, As to formations. There are a lot of ones that include bikes. The most popular is of course the Battle-Demi Company in the Gladius. These guys fulfill the role of Fast Attack slot. And cheap too. And they are Obsec. Not bad, you get some fire power and can fit in more Grav-cannons. The Storm-lance Battle Demi-Company can allow you to take one unit of Attack Bikes. These guys then turn into Jet-bikes. Allowing them to move up to 12 inches after shooting. Vroom-Vroom. Not bad. The problem with this though is that they lose Obsec.  The Speartip Strike is another fun one. This is the one time I would consider heavy bolters over anything else. What this formation does is screw with your enemy. Shooting at enemies to force them to either take a pinning test with negatives to leadership, or to pick from either going to ground, or running towards you. This allow your to harass your enemy and force them to get pinned or to get closer to you. You you take some Heavy Bolters and just harass the enemy.  This has no use versus something with fearless, so you are limited in your targets. Still can be fun and if something cant go to ground, they have to come closer to you.

The problem with the Attack Bike is that it is simple. There are not a whole lot of tricks you can pull with it or insane combos. It is literally just a bike with a gun. What makes it good is how the user and the game changes what it does. The Attack bike is a fun precision unit that can be used to great effect if use properly. Just don’t expect it to survive the game. It isn’t very tough. Remember to share your opinions below and remember Frontline Gaming sells Games Workshop product at up to 25% off, every day.